Where did Lord Shiva's trident come from?

Where did it actually come from? I have many stories from many friends about how Lord Shiva's trident came. But I want to know the real way that it had formed.

There can be multiple stories about the origin of Lord Shiva's trident based on different Kalpa. I know some references where Lord Shiva trident was made by Tvashta (or Vishvakarma) by Vaishnava splendour of Sun.

According to Vishnu Purana, Book 3, Chapter 2, Sanjna (wife of Lord Surya) went away from her husband because she was unable to endure the fervours of her lord. But when Lord Surya knew about this, he brought Sanjna back. Then, Vishvakarma (father of Sanjna) grind off some of the effulgence of Lord Surya and reduced the intensity of him. With that Vaishnava part (Lord Surya is said to be the part of Lord Narayana), Vishvakarma created many weapons including Lord Shiva's trident and Lord Narayana's discuss.

Sanjná, the daughter of Viśwakarman, was the wife of the sun, and bore him three children, the Manu (Vaivaswata), Yama, and the goddess Yamí (or the Yamuná river). Unable to endure the fervours of her lord, Sanjná gave him Chháyá as his handmaid, and repaired to the forests to practise devout exercises. The sun, supposing Chháyá to be his wife Sanjná, begot by her three other children, Śanaiśchara (Saturn), another Manu (Sávarńi), and a daughter Tapatí (the Tapti river). Chháyá, upon one occasion, being offended with Yama, the son of Sanjná, denounced an imprecation upon him, and thereby revealed to Yama and to the sun that she was not in truth Sanjná, the mother of the former. Being further informed by Chháyá that his wife had gone to the wilderness, the sun beheld her by the eye of meditation engaged in austerities, in the figure of a mare (in the region of Uttara Kuru). Metamorphosing himself into a horse, he rejoined his wife, and begot three other children, the two Áswins and Revanta, and then brought Sanjná back to his own dwelling. To diminish his intensity, Viśwakarman placed the luminary on his lathe, to grind off some of his effulgence; and in this manner reduced it an eighth, for more than that was inseparable. The parts of the divine Vaishńava splendour, residing in the sun, that were filed off by Viśwakarman, fell blazing down upon the earth, and the artist constructed of them the discus of Vishńu, the trident of Śiva, the weapon of the god of wealth, the lance of Kártikeya, and the weapons of the other gods: all these Viśwakarman fabricated from the superfluous rays of the sun.

Same thing has been said in Matsya Purana, Chapter 11.

With the lustre which was removed from the body of the sun, Tvaşțā, made Sudarśana Cakra for Visnu, a trident for Siva and the Vajra for Indra for the subjugation of the Daityas and Dānavas. 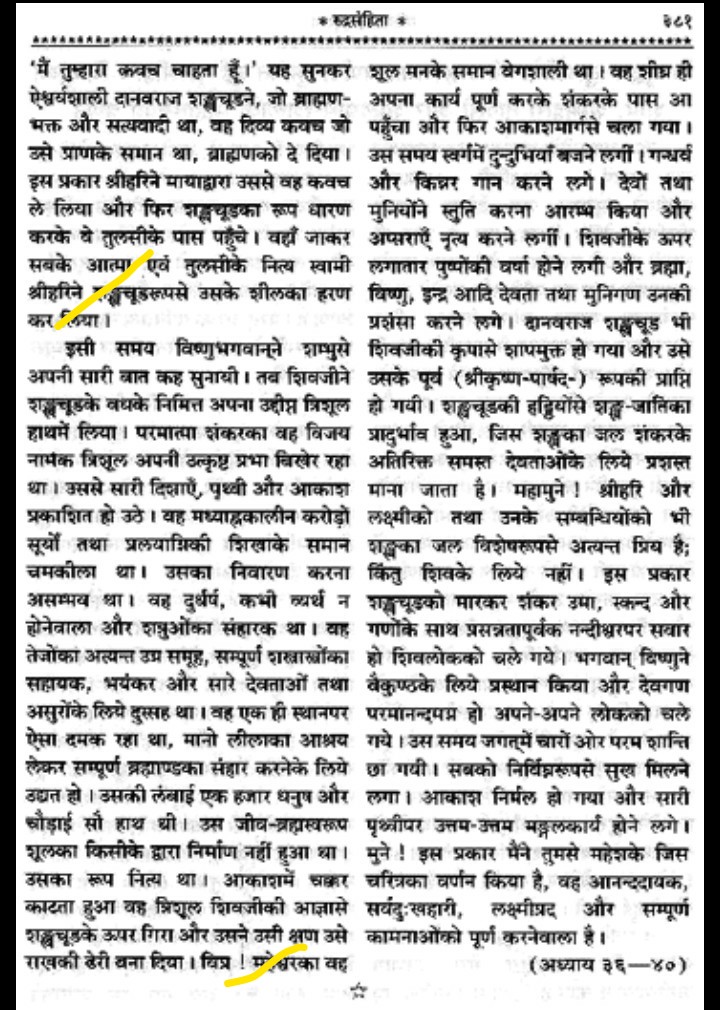 Lord Shiva's trishul name was 'Vijay'. It is mentioned in Shiva purana rudra samhita, yuddha khand - when Shiva goes to kill shankhchur on request of devas. Its height was equal to ten bows and its width was equal to 100 hands. According to Shiva purana, the trishul was not created by anyone, it is svayambhu or self created. But it doesn't mention from which metal it was created.

Not the answer you're looking for? Browse other questions tagged shiva weapon .

7
Where and when do Lord Shiva's legends originate?
8
How was the world running after Kamadev's death?
9
Is there any account of life stories/life styles of ganas of Lord Shiva?
10
Why is Moon on Lord Shiva's head only shown as crescent?
7
Correct way to chant Lord Shiva's name
10
When did Vishnu destroy trident of Shiva?