In all cases the Deity is typically addressed as all three — the surrounding, the uplifter and the ultimate goal. As the result of chanting, you will reach the Deity (mantra siddhi) and receive His blessings. Gāyatrī mantras are supposed to be somewhat secret, so I will not delve on their content in detail. They should be received from an empowered Guru who can ensure your success in chanting.

Gāyatrī is also a meter of 3 padas (quarters) of 8 syllables each. It is the shortest of all meters (24 syllables), followed by anuštubh (32 syllables), brihati (36 syllables) and others. Being the first of all meters, Krišna claims to be gāyatrī (Bhagavad-gītā 10.35: gāyatrī chandasām aham).

AUM, the Supreme name of God. A full explanation of this has been given in a related article.

BHUR BHUVAH SWAH. These three words collectively are known as the "Mahavyahriti". They express the nature of God, and demonstrate his inherent qualities.

TAT. Literally, this word means "that", being used in Sanskrit to denote the third person. It is also mentioned in the Bhagavad Gita by Sri Krishna Himself, where He implies the selfless nature of the word.

SA-VI-TUR. Savita, from which Savitur is derived, is another name of God, this being the reason that the Gayatri Mantra is often known as the Savitri Mantra.

VA-RE-NY-AM. Varenyam signifies our acceptance of God, and can be translated as meaning "Who is worthy".

BHAR-GO. Bhargo is taken to signify the Glorious Light that is God's love and power.

DE-VAS-YA. The word Deva, from which this word is derived, has been translated by different people in many different ways.

DHI-MA-HI. Meaning to meditate and focus our mind on God.

DHI-YO. Sanskrit for "intellect", this is the essence of this part of the Gayatri Mantra.

YO. Meaning "Who" or "That", Yo signifies yet again that it is not to anyone else that we direct these prayers, but to God alone.

NAH. Nah means "Ours", and signifies the selflessness of the request we make of God in this part of the Gayatri Mantra.

PRA-CHO-DA-YAT. Prachodayat, the final word of the Gayatri Mantra, rounds off the whole mantra, and completes the request we make of God in this final part. 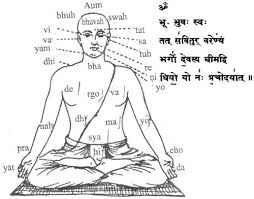 Super Science of Mantra What are Mantras? Were they created on the base of knowledge or Fiction? Do Mantras have some super science behind them, which makes them work?

The experiments in the efficacy of a mantra (spell and incantation) have been going on not only among Indian religions and castes but among the religions of every country in the world. It is a unique discovery by Indian rishis and sages.

The scriptures which describe these mantras are not the result of their wayward imagination, but they are the result of their sadhana and inner experiences. This mantra vidya (knowledge of mystical formulae) owes its origin, development and success to India and it was from here that it gradually spread across the world. This Indian vidya or what we call Indian science of mantras is complete in itself. There is no exaggeration or distortion of facts and I can say emphatically that they have a eternal scientific basis of study of the vibrations. Through the combination of sound or sound waves of a particular frequency, this Gayatri Mantra is claimed to be capable of developing specific spiritual potentialities.

*** GAYATRI MANTRA is broadcasted daily for 15 minutes from 7 P.M. onwards over Radio Paramaribo, Surinam, South America for the past two years, and in Amsterdam, Holland for the last six months.***

"It's meaning: God is dear to me like my own breath, He is the dispeller of my pains, and giver of happiness.I meditate on the supremely adorable Light of the Divine Creator, that it may inspire my thought and understanding." The above information is worth circulating and sharing with one and all! How rich and wonderful are our Vedas.

NASA has said that, it is the exact distance between Earth and Sun(Bhanu)(during the Aphelion (https://simple.wikipedia.org/wiki/Aphelion)). (Note: < 1% error observed although due to the bulging of planet earth from one side owing to the high buildings raised in modern metallic civilization instead of high wooden trees of those days)

Which proves God Hanuman did jump to Planet Sun, thinking it as a sweet fruit (Madhur phal). It is really interesting how accurate and meaningful our ancient scriptures are.Unfortunately barely it is recognized, interpreted accurately or realized by any in today's time... I'm PROUD to SHARE ....

Read on some spiritual insights - In Bhagwat Gita: Chapter 10.35, Lord Krishna is there present if someone chants(listen) Gayatri Mantra as it is the king of all the Mantras & God himself resides in this mantra. "Sri Krishna says: Of the hymns in the Sama Veda I am the Brihat-sama, and of all the mantras, I am the Gayatri Mantra.’’ The Gayatri mantra is found in all the four Vedas in Hindu religion. The God invoked in this mantra is Savitr, and hence the mantra is also called Sāvitrī Mantra. Gayatri - very powerful Mantra (https://www.google.co.in/amp/s/www.speakingtree.in/allslides/gayatri-very-powerful-mantra/m-lite)

Test of fire for saints- Eg; Author of the holy Ramacharitramanas- Goswami Tulsidasji (birth name: ‘Rambola’, as he spoke Rama instead of crying immediately after his birth) was the only one who during his childhood right at first time with correct intonations and sounds uttered Gayatri mantra and surprised all his Guru's present who were trying to practice for years. Thus, Gayatri mantra is considered as the most important mantra in Sanatana Dharma-the qualifying measure of a spiritually fulfilling life. Once Akbar(this king had a natural spiritual bent) wanted to test Tulsidasji devotion —he was startled to see him worshiping vanar god (monkey) and asked if I prison you will you be saved by monkey?, he imprisoned him. It is said that after Goswami Tulsidasji formulated the famous Hanuman chalisa in 40 days in Awadhi language(so common people too can everywhere recite easily), a huge army of monkeys menaced the whole city of Delhi and the monkeys injured several soldiers of the emperor's army, thus he released him for his true devotion to God. The emperor realized that all this happening was a Lila of Lord Hanuman himself, therefore out of fear he freed Tulsidas ji and asked for forgiveness, later offered a golden roof over the Bajrangbali temple.

Note: remembering Hanumanji is more than enough, if someone wants to chant chalisa —he must have bathe(bodily,mind austerity is very important Sri Hanumanji being SATTVIC DEITY, accepts strictly Sattvic worship, one should be careful enough as to avoid spiritual reactions and get optimum blessings.)

A diluted form of Pranav a mantra OM: Like, when you take powerful medicines, you have to take some ancillary medicines to avoid the side effects. Gayathri mantra is a further diluted form of OM(Pranav/root mantra). When you utter Gayathri mantra, the side effects of Pranava mantra(—as we aren't prepared enough to cleanse up at those highest levels, thus need an adjustment of other sound combinations too along with OM sound) are mostly avoided, so that benefits can be experienced at a larger scale.

The Mantra will develop devotion inside you and God will start listening down to you after you achieve good levels of devotion. At times it is seen, that people tend to get unhealthy because of a bad omen. Worshiping Gayatri Mantra also prevents the effect of a bad omen and keeps you fit. Chanting this Mantra also tends to keep your future generations intelligent and wise who are the future keepers of this wealth. It also brings in a lot of prosperity within the family who always stay calm and amiable among themselves despite staying in the presence of so much of wealth. Becoming radiant Divine light is the greatest benefit, but if that’s not enough for you, or you think it’s too far away, along the path to Divinity there are many other benefits that you can enjoy sooner.

Although Gayatri Mantra is very lucky for all, but for children it is more beneficial. Chanting this mantra 108 times every day, makes children intelligent and helps them achieve everything they want.

If you are facing difficulties because of your enemies, chant this mantra every Tuesday, Sunday and on Amavasya wearing red clothes. You should think of Goddess Durga while chanting the Gayatri Mantra. Doing with will get you rid of all the problems created by your enemies. If your marriage is getting delayed, chant this mantra 108 times every Monday, wearing yellow clothes. While chanting this mantra, think of goddess Parvati. You will soon find a suitable match. To get rid of a prolonged illness, chant this mantra on any auspicious day. Keep a pot of fresh water too near you and sit on a red cloth while you chant this mantra. After chanting, drink that pot of water. It may surprise you but regular chanting of Gayatri Mantra can give you glowing skin. The continuous chanting of this mantra also create hatred for bad food which leads to healthy eating habbits for you. If you are facing difficulties in eyes, then Gayatri Mantra can help you. It increases the eye sight and solves other problems related to it. Chanting Gayatri may bring immense, practical benefits into your life as well as grant you the ability to become eternal, luminous light. It is believed by practitioners that reciting the mantra bestows wisdom and enlightenment, through the vehicle of the Sun (Savitr), who represents the source and inspiration of the universe. Gayatri Mantra gives you spiritual satisfaction and divine peace which helps you in dealing with miseries of life.) Universal brotherhood and super human capabilities:: The Gayatri Mantra is scientific, as it is based on the universal and natural laws relating to sound and matter. The Mantra recited on a mass scale creates powerful sound waves which affect every human being like heat and cold waves in a subtle way, and the result is instantaneous. The Aura will then be created engulfing the whole world, making it impossible for any evil power to have its effect on our world. The aura thus strengthens peace, love, unity, equality and brotherhood. Just even listening to Gayatri Mantra results in awakening trillions of neurons in the brain due to musical healing, (generally only four percent of which stay awake in the ordinary brain) When this happens man becomes super human, begins forgiving and forgetting and starts living peacefully, instead of wasting his life over unending desires. — — — — — — — — —

Not the answer you're looking for? Browse other questions tagged prayer gayatri-mantra .

22
Is the Gayatri mantra used to worship the sun or Goddess Gayatri?