Why did Arjuna forget the Bhagavad Gita?

The son of Prithâ, after becoming possessed of his kingdom (in an) undisturbed (state), enjoyed himself in the company of Krishna, full of delight in that heavenly palace. And once, O king! they happened to go, surrounded by their people, and rejoicing, to a certain portion of the palace which resembled heaven. Then Arjuna, the son of Pându, having surveyed with delight that lovely palace, in the company of Krishna, spoke these words: 'O you of mighty arms! O you whose mother is Devakî ! when the battle was about to commence, I became aware of your greatness, and that divine form of yours. But that, O Kesava! which through affection (for me) you explained before, has all disappeared, O tiger-like man! from my degenerate mind. Again and again, however, I feel a curiosity about those topics. But (now), O Mâdhava! you will be going at no distant date to Dvârakâ.

But after the Mahabharata war, one day Arjuna told that he had forgotten the Bhagavad Gita. Why did this happen? How can a man forget the greatest advice which led to the success of his life? Was there a mistake in the way Arjuna grasped the Gita that led to this incident?

The same reason we forget good advices, the fickleness of our mind. Even after reading and listening to the Gita so many times we don't remember all its messages, then was it not just obvious for Arjuna to forget what he listened just once and that too on a battle field? After listening to Gita he engaged in the terrible battle directly for about 18 days. He would have hardly got any time to reflect upon Shri Krishna's message that took 18 chapters in the Mahabharat. So later Arjuna wants to listen to the teachings again and requests Krishna to retell it:

O mighty-armed one, Your greatness became known to me upon the approach of the battle. O son of Devaki, Your form also, as the Lord of the universe, then became known to me! What You said unto me at that time through affection, O Kesava, has all been forgotten by me, O chief of men, in consequence of the fickleness of my mind.

Then Shri Krishna friendly rebukes him for being such a dull witted and faithless person (अश्रद्दधानॊ ऽसि दुर्मेधाश चासि पाण्डव [MB - 14.16.10]) and narrates to him another set of instructions known as the Anugita.

I think (am not absolutely sure) I read somewhere that after Lord Krishna showed Arjun the ViswaRoop (the Grand Divine Reality that everything is God and that God is everything), he felt that it would be difficult for Arjun to lead a life of normal human being with this realization. Arjun would no longer be able to accept Krishna as his friend and soul mate; instead he might look upon him only with respect and awe.

Hence, he told Arjun that he would make him forget everything that was shown to him during the Gita episode. The Gita instructions would only leave a subtle impression in Arjun's sub-conscious mind.

Why did Arjuna forgot the Bhagvat Gita ?

The exact reason is given in Shreemad Bhagvat Purana -Skanda 1- Chapter 15 - Shloka 30.

It's said that Arjuna forgot Shree Krishna's teaching given to him at the time of Kuruksetra war because of Time factor and some of the mistakes happened from him while doing some works and his attachment to the pleasure. So forgetting this knowledge was outcome of the results of his own mistakes as well as time.

The word "kāla-karma-tamo-ruddhaḿ " in the verse is clearly mentioning the reasons.

This reason is also confirmed from Motilal Banarsidass version of Shreemad Bhagvatam.

Swami Prabhupadas translation seems to be far different , he is saying that it was leela of Shree krishna and was result of his absence . But actually this verse is not saying anything about the pastimes of krishna or his absence but only stating that this is due to time factor and Arjuna's own actions.

(Gita Press translation) - Due to the time and due to the mistakes happned because of various actions performed by arjuna , he forgot the knowledge of gita given to him by Shree Krishna at kurukshetra war. But due to bhakti towards Shree krishna he again remembered that.

(Vedbase translation) - Because of the Lord’s pastimes and activities and because of His absence, it appeared that Arjuna forgot the instructions left by the Personality of Godhead. But factually this was not the case, and again he became lord of his senses. SB 1.15.30 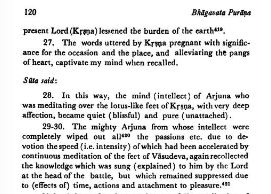 Same way as we forget the advice given to us by elders. And here Krishna speaks of brahma jnana. Most difficult of all which gives us realization. Was Arjuna mentally prepared to understand all those which Krishna taught? Bhagavad Gita itself mentions that Arjuna could not hold a lot of teachings and hence asks for simpler ways.

Example : We cannot learn medicine directly. First we must read lower classes and then mature gradually. Similarly to understand what Krishna taught, Arjuna did not had that maturity to undertsand and adopt.

Arjuna wasn't enlightened, of the many characters of the Mahābhārata, only two were enlightened: Kṛṣṇa, and then Balarāma. The two of course represent divergent attitudes towards enlightenment-in-general. For Kṛṣṇa, even though he was “enlightened,” he involved himself in the politics, war, and romance of day-to-day life (this was, by his own admission, for the purpose of effecting justice throughout the world). For Balarāma, there was almost no such involvement. It's for this reason that Balarāma/Saṅkarṣaṇa is sometimes regarded as Śiva-like, whereas Kṛṣṇa is regarded as Viṣṇu-like.

Enlightenment, if we are to talk about it, is more of a solo endeavor that requires great grit, determination, and bravery to actually bring about. So it's not really a random thing, consequently it is very rare (regardless of the time that you live in). Shockingly, it is thus found that only two characters in the great Epic are actually seen to be of significance (i.e. Vāsudeva and Saṅkarṣaṇa). It is for this reason that the Jainas probably choose to focus on Baladeva and Vāsudeva alone, to the exclusion of the other characters.

(It is also probably for this reason that the Epic and the Purāṇas themselves seem to depict Baladeva and Vāsudeva as co-incarnations of Viṣṇu. Not even Vyāsa was enlightened.)

This notion that enlightenment/salvation is rare, is not really unique to Hinduism. The Shīʿa Imāms make a similar confession, in a well-known narration involving Jaʿfar al-Ṣādiq, he implicitly states to the narrator that there are less than 17 believers on Earth. (via Kitāb al-Kafī, ch. 96, no. 4)

According to the pseudonymous Jed McKenna, whose philosophy is almost identical to that of Śaṅkarā's Advaita Vedānta, there are only around 12 enlightened people on Earth, some of whom he doesn't know. (via Jed Talks #1, p. 53)

The point is that enlightenment/salvation/belief is rare. Of the manifold characters of the Mahābhārata, Kṛṣṇa achieved this state, and perhaps Balarāma. Arjuna was just Kṛṣṇa's worldly friend. There is no doubt that Kṛṣṇa's and Arjuna's friendship was deep and affectionate, but their respective levels were not comparable, and so it is for this reason that Arjuna was able to learn a little bit (at least temporarily) through osmosis, especially via the philosophy that Kṛṣṇa preached right before the war, but ultimately, none of it stuck.

Arjuna forgot because he was Kshatriya and the Yuga was Dvapra, and also memorizing and understanding scriptures and Brahman/God is a prime duty of Brahmins and Sanyasis.

Bhagavad Gita 18.42 Tranquility, restraint, austerity, purity, patience, integrity, knowledge, wisdom, and belief in a hereafter—these are the intrinsic qualities of work for Brahmins.

Vâsudeva said: From me, O son of Prithâ! you heard a mystery, and learnt about the eternal (principle), about piety in (its true) form, and about all the everlasting worlds. It is excessively disagreeable to me, that you should not have grasped it through want of intelligence. And the recollection (of it) now again is not possible (to me). Really, O son of Pându! you are devoid of faith and of a bad intellect. And, O Dhanañgaya! it is not possible for me to repeat in full (what I said before). For that doctrine was perfectly adequate for understanding the seat, of the Brahman. It is not possible for me to state it again in full in that way. For then accompanied by my mystic power, I declared to you the Supreme Brahman.

But Krishna gave the knowledge of Gita to Arjuna over other scholars and Brahmins, because he had saintly intrinsic nature.

Bhagvat Gita 16.5 The divine qualities lead to liberation, while the demoniac qualities are the cause for a continuing destiny of bondage. Grieve not, O Arjun, as you were born with saintly virtues.

All 5 Pandavas represented a particular trait, where Yudhishtara, son of Yama, represents Dharma, Bhima, son of Vayu, represents strength, Arjuna, son of Indra, represents intellect and reasoning, Nakul-Sahdeva, son of Ashvini Kumara, represents beauty and skill and Krishna himself represents Guru. So, out of Pandavas, Arjuna was most competent to understand spirituality, because of strong intellect(Buddhi) and reasoning(trait that differs men from animals), as revealed by Krishna, the Guru.

1
Why did Arjuna forget teachings of Bhagavad Gita?

11
How do the Bhagavad Gita and the Brahma Sutras refer to each other?
23
How to start reading Bhagavad Gita?
7
Is the current form of Gita is authentic as what Krishna actually said or interpolated?
17
How is 'Vishwa Virat Swaroop' of Lord Krishna described in Mahabharata?
14
Why is Bhagavad Gita of Lord Krishna considered as the ultimate Gita?
6
What sort of questions perplexed Prince Arjuna before the start of the Mahabharata War
1
What is the difference between — “Hypnotism” and “Divya Drushti” granted to Arjuna by Krishna?
4
Is K.M. Ganguli's translation of the Anu Gita in line with other Mahabharata translators?