Got to read about sage Lomasa here while researching about Kamyaka Forest:

The Pandavas came back from the Dwaita woods to Kamyaka again for a 2nd time. This time they lived without Arjuna who had left for military training in the northern Himalayas (3,36). They lived thus for 5 years in Kamyaka (3,50). Ghatotkacha lived with them during this period (7,181). Sage Vyasa and Sage Lomasa visited them then. From there, they set out for a pilgrimage across India, guided by Lomasa (3,93).

But want to know more about him, coz he belongs to the same era to which Ved Vyasa belonged. Are there any known works by him?

You can read about the activities of lomasha in the vAnaparva of the mAhAbharata, as you have described above. He seems to feature heavily from about chapter 92 onwards. Also see where lomasha appears in this summary chapter. There are also many references to him in the purAnas, and these are what I will discuss in my answer.

Lomasha's main appearance is in padma purAna. In 6.46 of the same purAna, lomasha narrates the glories of pApamocanI ekAdaShI. In 6.128, lomasha describes the glories of bathing in mAgha month, and this story continues into the next chapter where he frees some people from a curse.

In 5.36, it is lomasha who gives a long and beautiful narration of the life of rAma. This shows that lomasha is a great guide to rAma, and by his grace, both now and through reading the padma purAna, we can increase our bhakti towards rAma. We can only infer from this that lomasha himself is a great bhakta of rAma. Because of this, lomasha is honoured as "munIshvaraH", "lord of sages", and "mAM munivaro lomashaH sarvabuddhimAn", "best sage lomasha, most intelligent of all". Lomasha is praised (5.36.85) as follows:

The main description of lomasha occurs in padma purAna 6.55. I will not post the entire Sanskrit text because it is so long. He is

"the best sage Lomasha who was guileless, who was (all) alone practising a severe penance, who was ancient, who did not eat food, who had conquered his soul, and who had controlled his anger, who knew the truth about righteousness, who was proficient in all sacred texts, who had (lived) a long life, who was magnanimous, who had hair, and who resembled Brahma. As each kalpa passed, one of his hair withered. Therefore, this great sage who was omniscient, was named Lomasha".

I can count fifteen perfected qualities of lomasha in this text. Here he narrates the importance of putradA ekAdaShI. Lomasha was perfected both internally in virtue and knowledge, but also externally in his penance. Although he must have been created at some time, lomasha according to this purAna is almost eternal. There are about 100,000 hairs on the head of an average person, so this comes to about 400+ trillion years as his lifespan!

In 7.25, he describes the importance of looking after guests. Just as he is devoted to rAma, the text also says

Lomasha, highly devoted to Narayana, was very much pleased with them, and narrating (tales of) Narayana.

Most important is the praise then offered to lomasha, in which it is revealed that he is in some way an avatar. The text says:

O revered one, O you who know all the worldly practices, indeed our hermitage is purified by the couple of your feet which are fit to be seized (i.e. touched) by the good. By seeing the couple of your feet, all the sins that we had formerly committed through delusion, have perished. You are actually lord Narayana fit to be worshipped even by gods.

In garuDa purAna 2.6.54-58, he has a very short part in a dialogue between other sages. There is nothing much of note here, apart from lomasha being treated with the honour of any other seer: he was worthy of falling prostrate in front of. According to the skanda purAna, lomasha visited RNamochana and kuShasthalI. The nArada pa~ncharAtra (1.6) contains a conversation between nArada and lomasha. His virtues are described in verses 7-12, and so is his beautiful Ashrama described later.

Unfortunately I have not been able to find any references to him in Vedic indexes, but many of these are hard to access so it is plausible that he was the seer of some mantras. Lomasha saMhitA is an obscure, possibly spurious, text attributed to him. In Rewalsar in Himchal Pradesh, there is a small temple dedicated to him. 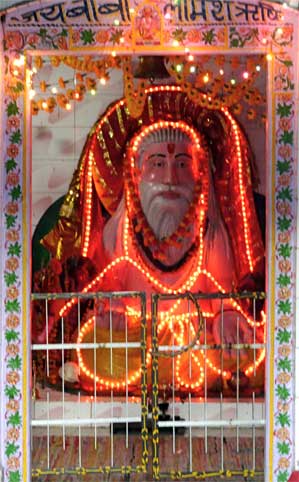 Not the answer you're looking for? Browse other questions tagged mahabharata identification-request rishi .

10
Does Balarama ever regret killing Romaharshana?
8
What is the story of Sage Suta?

12
Who was the sage who witnessed Mahabharata and Ramayana multiple times?
10
Who was Budha-Kaushika?
12
Who was Maharshi Garga?
11
Who was sage Harita, the son of Bhṛgu?
4
Who was the sage who asked his disciples to guard his wife while he was away?
5
When the Sun was lost?
5
Was Manasa the daughter of Shiva or sage Kashyapa?