How should be a Shivaalay Temple?

Is it true? if yes, please mention all which are must for a Shivaalay temple as per scriptures.

I have seen in some lord Shiv temples the above mentioned things. Some temple names are:

Usually the temple construction involves complex processes which starts from selecting a proper site and layout. It involves various subjects like Vastu, Shilpa, Agama etc. for the whole process of temple making. Usually there are not many differences in the basic structure of the temples.

Ponds may not be mandatory for shivalayas because there are many temples which do not have ponds. Temple tanks are not exclusive for Shiva temples alone. There is pushkarni in Rajagopala Swami temple, Mannargudi also in Venkatesha temple, Tirumala. Even famous temples like Sri Varadharaja of kAnchi and Sri Ranganatha of Srirangam have their own tanks.

The Shiva temples too have their own configuration. In a Siva temple, the Shivaliga would be placed at the Brahma sthana, the shrines are dedicated to Parvathi, Ganapati, Subramanya , Veerabhadra and Candesvara would placed in the surrounding cells of the temples Vastu Purusha Mandala; as illustrated in the following typical layout of the famous Shiva temple at Gangaikondacholapuram(mid 11th century). 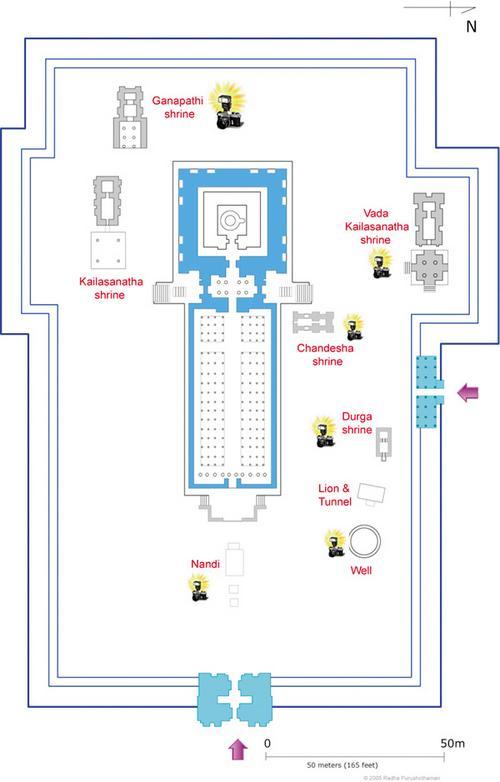 Similarly in the Sri Kailasanathaswamy and Nithyakalyani Amman Temple, Ilayathakudi ( near karaikudi), Shiva shrine is at the Brahmastana, opposite to Shiva is lined Nandi, Bali pita and Dwajasthamba. The shrine of Nitya_kalyani Amman is located independently in the North. In the Mantapa adjoining the Sanctum are Ganapathi, Durga and Skanda. The Saptha Mathrikas, the seven female divinities, have their shrine in the Prakara behind the shrine.

One of the main resources for a practicing shilpi is the collection of Dhyana shlokas.

Before a shilpi starts on a project to sculpt an image, he needs to be clear in his mind on its form, its aspects, its countenance, the details of its physiognomy, its facial and bodily expressions; its posture, details of the number of arms, heads and eyes; and details of its ornaments, ayudhas (objects it holds in its hands) etc. For this purpose, the Shilpis generally refer to a wonderful collection of most amazingly articulate verses called Dhyana Shlokas, the verses in contemplation. These verses culled from various texts of Shipa Shastra, the Agamas and the Puranas; and also from Buddhist and Jain texts, describe, precisely, the postures (dynamic or static, seated or standing), the Bhangas (flexions – slight, triple, or extreme bends), Mudras (hand gestures), the attitudes, the nature, the consorts and other vital details of each aspect that provides the deity with power and grace. it is said that there are about 32 aspects or forms of Ganapathi, 16 of Skanda, 5 of Brahma, 64 of yoginis, and innumerable forms of Vishnu, Shiva and Devi .Each one of those forms has a Dhyana shloka illustrating its aspects and attributes.

Sukhasana is sitting with one leg bent at the knee and across; and the other leg down and almost touching the ground. The deity is in a relaxed position looking happy, peaceful and joyous. Images of Padmapani , Vishnu, Shiva or Devi in Sukhasana are the most common examples.

A. Maps of Madurai and Sri Rangam

By courtesy of Kultur in Indien

8
Does pradakshina direction differ with each stage of life (ashrama)?

11
Why Shivalinga sthapana in temple is unique in Hinduism?
2
Why are most famous (or wish fulfiling) temples situated on hills?
7
Who did Vishnu appear before in Thiruvahindrapuram, Bhumidevi or Bhumadevi?
10
How does the names and events reoccur in different manvantara or Kalpa or different universes?
12
The Legend of Chessboard (Pala payasam story) of Ambalappuzha Sri Krishna Temple