Is heaven a place of extreme happiness? If yes, how to solve the paradox of experiencing hell in heaven?

In Hinduism, is heaven (svarga) a place of extreme happiness?

If yes, how to solve the paradox of experiencing hell (naraka) in heaven? This is better explained through the following an example.

Consider a wife who has devoted her entire life to the service of her husband so she attains the title pativratā. Assume the husband is a notorious criminal so he's surely headed for hell after death. Let's say the husband dies first and goes to hell. Wife too passes away a little later but goes to heaven instead as result of all the puṇya she's accumulated.

Given that and assuming heaven is a physical place much like the Earth, for the wife's soul, is there going to be any happiness in heaven if she cannot find her husband's soul there?

Now this answer suggests the different lokas including heaven (svarga) and hell (naraka) are actually non-physical realms. Assuming that to be true, how can the wife's soul be "happy" in her private non-physical heaven not knowing and constantly wondering if the husband's soul is also experiencing the same? The thought What if he's experiencing hell? will be a hell in itself. Isn't it?

Have any Hindu philosophers attempted to solve this paradox? If yes, how?

The [means of happiness revealed by the Vedas] is like the evident one, It is linked with impurity, destruction and inequality. Other than that is better,—proceeding from the right cognition of the Manifest, Unmanifest and the Knower.

Here is how Vachaspati Mishra explains "destruction and inequality" in his Samkhya Karika Bhashya:

Though the terms decay and excess (used in the above Kārikā) really relate to the effect, here they are attributed to the means. This quality of decay in heaven is inferred as it is a positive entity and a product. Further, it is said that sacrifices like Jyotiṣṭoma are the means of attaining mere heaven, whereas sacrifices like Vājapeya etc. lead one to self-sovereignty. This inequality in the result is what constitutes excess spoken of (in the Kārikā). Verily, the superior prosperity of one man makes another of lesser prosperity sad!

Immortality denoted in the passage ‘We drank soma and became immortal’ indicates long durability. It is said elsewhere: ‘Verily, immortality is the durability extending till the final dissolution of all the elements (i.e. of the entire universe).’ Hence, the Śruti declares: ‘Neither by deeds nor by progeny nor by wealth but by renunciation alone they attained immortality; that which the hermits enter is laid beyond the heavens and yet it shines brilliantly in the heart’ (M.N.Up.12-14); and also, ‘Sages with children and desiring wealth got only death (as reward) by actions while those other sages who were wise attained immortality which is beyond all actions.’

So destruction refers to fact that residence in Swarga is not eternal; after you've exhausted the fruit of your actions that brought you there, you have to be reborn again. And inequality refers to the fact that not everyone in Swarga is of equal status. Doing an Ashwamedha Yagna only makes you a resident of Swarga, whereas doing a Vajapeya Yagna makes you Indra, i.e. the ruler of Swarga. So while residing in Swarga, you'll be jealous of others who have higher status than you do.

And also, happiness in Swarga is not as great as happiness in Moksha. This chapter of the Brihadaranyala Upanishad analyzes this quantitatively:

So happiness in Swarga is either 10,000 or a million times less than the highest possible happiness.

To answer your side question, it is perfectly possible for a soul to be happy in Swarga without the presence of the spouse it had in its most recent birth.

Is heaven a place of absolute ('extreme' post-edit) happiness?

When they have thus enjoyed vast heavenly sense pleasure and the results of their pious activities are exhausted, they return to this mortal planet again. Thus those who seek sense enjoyment by adhering to the principles of the three Vedas achieve only repeated birth and death. 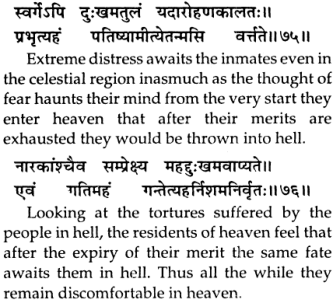 Manu smriti 4.239. For in the next world neither father, nor mother, nor wife, nor sons, nor relations stay to be his companions; spiritual merit alone remains (with him).

So, husband-wife and other relations seem to exist only till death and cease to exist after that.

Therefore, the hypothetical example isn't really leading to a paradox. It isn't proving that "sorrows also can exist in heaven".

The jiva, after death reaches the heaven if his merits preponderate. That is to say, he experiences the fruit of his merit by experiencing joy in heaven. But soon after the fruits are experienced. The jiva takes another birth based on the extent of spiritual evolvement. Also it must be noted that memories exist only till the body does. With the liberation from the body, all ties associated with it are also broken. Hence there is no question of memories in heaven.

Given all of this, liberation (moksha) is real eternal ecstasy. Heaven and paradise are also just momentary trinkets of joy, which gets exhausted in no time. Hence the goal of life must be to emerge out of the confines of body and mind and thus attain liberation, rather than performing good acts and attaining paradise.

8
What exactly is a loka? Is it a place that be physically reached?

16
How can heaven-hell concept and rebirth concept both be true?
5
How is punishment and enjoyment possible in hell and heaven without body?
5
Critics on Karma
4
What happens after death according to Adavita Vedanta?