Are Vedic Gods Tvashtar And Vishwakarma the same?

Lord tvastar is an artisan God who is praised In the Vedas and Vishwakarma is also considered An artisan God in puranas and epics. So are these the different names of the same god or are they two different Gods?

There is a lot of confusion regarding these two perhaps because the Puranas mention Vishwakarma as the doer of things that Vedas mention Tavshtar to have done. This book mentions the same: 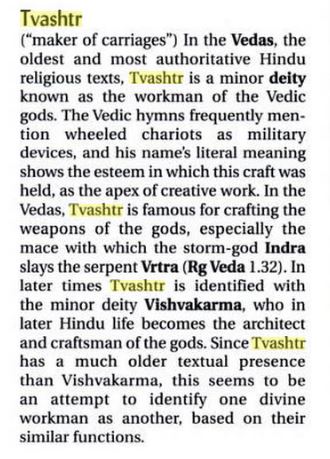 But there is a huge distinction between Vedic & Puranic Vishwakarma - Vedas use Vishwakarman most often as an adjective not the name of a person. It is an epithet for the Supreme God, like Brahman, since He is the one who creates everything, a job that the Puranas give to Brahma. This is evident from Rig Veda Book 10, Verse 81 which describes Vishwakarman similar to the way the Cosmic Purush is described:

The Next Verse RV.10.82 also strengthens the same belief:

The sixth verse of the above hymn clearly mentions the navel of the unborn Lord who lies in water again hinting that the verse is actually meant for Lord Narayan who creates the world in the form of Brahma. The actual Sanskrit verse in fact mentions as Tvashtar originating from Vishwakarman:

The Vedic Tvashtar on the other hand is considered the artist who creates an embryo inside a woman's womb. Atharva Veda Book 5 Hymn 25 mentions the following:

11 Tvashtar, celestial artist, lay within the body of this dame. A male germ with the noblest form for her in the tenth month to bear.

9 The God-devoted son Tvashtar produces: from Tvashtar springs to life your fleet-foot Courser. Tvashtar gave being to this All about us. Priest, worship here the mighty work's achiever.

He is even invoked in Atharva Veda Wedding Hymn for he created both the male and the female forms:

Rig Veda Book 3 Verse 55 also mentions something to that effect:

19 Tvaṣṭar the God, the omniform. Creator, begets and feeds mankind in various manner. His, verily, arc all these living creatures. Great is the Gods’ supreme dominion.

Additionally, the Vedas also make him the father-in-law of Surya. As mentioned in Rig Ved Verse 17.1 of Book 10:

Tvashtar prepares the bridal of his Daughter: all the world hears the tidings and assembles. But Yama's Mother, Spouse of great Vivasvān, vanished as she was carried to her dwelling.

RV Book 10. Verse 10.5 also mentions him as the creator of Yama and Yami, the offspring of Surya and Saranyu referring to his dual role as the fashioner of embryos as well as their forefather:

Even in the womb God Tvaṣṭar, Vivifier, shaping all forms, Creator, made us consorts. None violates his holy ordinances: that we are his the heavens and earth acknowledge.

Tvashtar also sired Trisiras or Vishwaroop as well as created Vritra. His being the father of Trisiras is also mentioned at multiple places one example being:

Paradoxically, he also created the Vajra with which Vritra was slayed as discussed in this question that was answered by you. Now all this is as per the Vedas and we get corroboration of some of this in the Mahabharat. Section 9 of Udyog Parva mentions the relationship between Tvashtar and Trisiras/Viswaroop as well as Vritra:

Once Twashtri the lord of creatures and the foremost of celestials, was engaged in practising rigid austerities. And it is said that from antipathy to Indra he created a son having three heads. And that being of universal form (Viswaroop) possessed of great lustre hankered after Indra's seat.

After Indra kills Vishwaroop the enraged Tvashtar creates Vritra to avenge his son's death and this text does not mention that he created the Vajra:

Now when the lord of creatures, Twashtri, heard that his son had been slain by Indra, his eyes became red with ire, and he spoke the following words, 'Since Indra hath killed my son who had committed no offence at all, who was constantly engaged in the practice of austerities, who was merciful, possessed of self-control, and of subdued passions, therefore, for the destruction of Indra, I will create Vritra.

The Purans however add a different persepective by calling him an Aditya, one of the sons of Aditi. Vishnu Puran Book 1 Chapter 15 mentions the following:

There were twelve celebrated deities in a former Manwantara, called Tushitas, who, upon the approach of the present period, or in the reign of the last Manu, Chákshusha, assembled, and said to one another, "Come, let us quickly enter into the womb of Adití, that we may be born in the next Manwantara, for thereby we shall again enjoy the rank of gods:" and accordingly they were born the sons of Kaśyapa, the son of Maríchi, by Adití, the daughter of Daksha; thence named the twelve Ádityas; whose appellations were respectively, Vishńu, Śakra, Áryaman, Dhútí, Twásht́ri, Púshan, Vivaswat, Savitri, Mitra, Varuńa, Anśa, and Bhaga.

Coming to Vishwakarma in the Purans, the Chapter 25 of Book 1 of Vishnu Purana calls him the son of the Vasu Prabhas and Yogasiddha, the sister of Devguru Brihaspati:

The sister of Váchaspati, lovely and virtuous, Yogasiddhá, who pervades the whole world without being devoted to it, was the wife of Prabhása, the eighth of the Vasus, and bore to him the patriarch Viswakarmá, the author of a thousand arts, the mechanist of the gods, the fabricator of all ornaments, the chief of artists, the constructor of the self-moving chariots of the deities, and by whose skill men obtain subsistence. Ajaikapád, Ahirvradhna, and the wise Rudra Twasht́ri, were born; and the self-born son of Twashtri was also the celebrated Viśwarúpa.

There are thus two different Tvasthars mentioned in the same Puran but the above passage tells us that it was Rudra Tvashtri, the son of Vishwakarma whose son was Trishiras.

Another corroboration of this thought comes from Section 1.3.23 of the Shiva Puran where Vishwakarma is mentioned to have fashioned the Vajra for Indra to kill the demon Vritrasur:

Dadhichi Gave up his life by his yogic power. Indra then instructed Kamdhenu to extract the bones from the dead body of Dadhichi. The bones were on given to 'Twashta' to construct the weapon-Vajra. Twashta took the weapons to Vishwakarma who at last constructed the Vajra.

Thus even in the Puranas Tvashtar and Vishwakarma are different just as they are in Vedas but the Purans confuse the terms when they make the father as the owner of the achievements of his son. This can be again seen in Vishnu Puran Book 3, Chapter 2 that mentions Vishwakarma as the father of Surya's wife:

Sanjná, the daughter of Viśwakarman, was the wife of the sun, and bore him three children, the Manu (Vaivaswata), Yama, and the goddess Yamí (or the Yamuná river).

To sum it up, Vedic Vishwakarman refers to God as the Creator while Vedic Tvashtar refers to the specific artisan known in the Purans as Vishwakarma who is the father-in-law of Surya and also the designer of the Vajra.

Not the answer you're looking for? Browse other questions tagged vedas puranas vedic-gods tvashtar vishwakarma .

7
Who is the god Tvashtar?
8
Why did Tvastar, the father of Vritra fashion the Vajra that killed his own son?
4
Was Maya Danav actually the son of Vishwakarma?
4
How was Vishwarupa, the son of Tvashtar related to Asuras?

10
Did the divine architect Vishwakarma cause the Earth to submerge?
7
Who is the god Tvashtar?
9
Who are the Vajin gods?
11
Are the Vedic Gods Prajapati and Brahma the same?
10
Who are the Ribhus?
2
What are the most accepted and authentic Hindu texts across the different traditions?
1
Who is the real creator of heaven and earth as per the Vedas?
4
Are Shiva , Vishnu and Brahma non vedic Gods?