What is Sapta Vidha Anupapatti? who has written that work?

Sapta Vidha Anupapatti, also called Seven Untenables is said to be an objection raised against the concept of Avidya of Advaita Vedanta. I've some questions regarding it:

What is Sapta Vidha Anupapatti or what are the seven untenables?

Here is the summary from John Grimes' book: 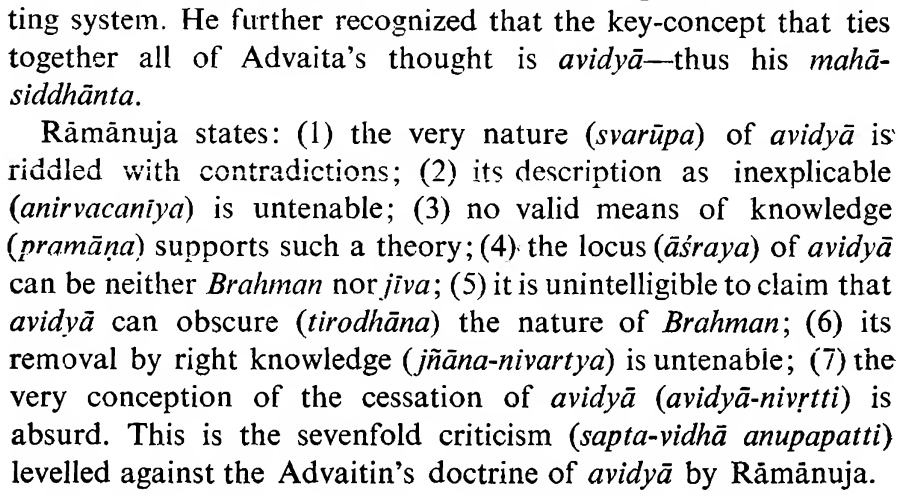 Who has written the work "Sapta Vidha Anupapatti"?

As described above, it is not a separate work but a subsection in the Mahasiddhanta of the Jijnasadhikarana section of Ramanuja's Sribhashya.

Did John Grimes coin the term "Sapta Vidha Anupapatti" or has Sri Ramanujacharya used that term?

The term sapta-vidha-anupapattayaH itself doesn't appear in the Sribhashya itself but is commonly found under the table of contents of printed editions of the Sribhashya, as well as in the form of section-headings within the text. It appears to be an artifact of the book editors for the reader's convenience. I haven't found the terms in Sudarsana Suri's Srutaprakasika or Rangaramanujamuni's Bhavaprakasika. I will update this answer if I find out that some post-Ramanuja author has used this term in their work.

Is the work based on Sri Bhashya or Satadushani? Where Ramanujacharya mentioned those Anupapatti in his bhashya?

As mentioned above, the actual criticisms appear in the Mahasiddhanta section of the Sribhashya opening. The Satadushani (100 faults) devotes seven separate vadas (arguments) for each of Ramanuja's criticisms. 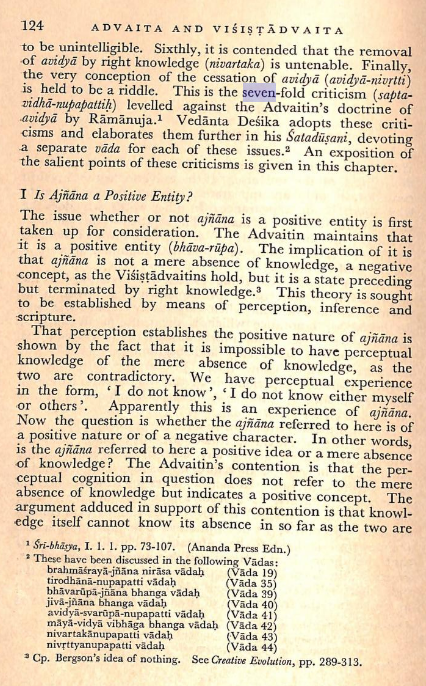 Not the answer you're looking for? Browse other questions tagged philosophy vishishtadvaita ramanujacharya ignorance .

6
Has any Advaita Acharya or scholar resolved/answered/refuted Sapta Vidha Anupapatti?

9
Are there any surviving quotes from Baudhayana's commentary on the Brahma Sutras?
6
What does the Vivarana school of Advaita believe about the nature of Avidya?
3
What Chandogya Upanishad verse is the sevenfold discipline of Bhakti Yoga related to?
2
How many Shaivite commentaries on the Brahma Sutras are there?
6
Has any Advaita Acharya or scholar resolved/answered/refuted Sapta Vidha Anupapatti?
5
What passages of Adi Shankaracharya’s Brahmasutra Bhashya does Sudarshana Suri cite?