In various Puranas and Scriptures the twins Ashwini Kumaras are referred to as physicians of the Gods. It was to them Maharishi Dadhichi imparted the knowledge of the Sanjeevani Mantra to the twins with his head having been replaced with a horse's head which split into thousand pieces as cursed by Indra, and was revived by Ashwini Kumaras.

However Ayurveda Shastra refers to Dhanvantari as the Father of medicine. Dhanvatri came from the Kshirasagara during the churning of the ocean with the pot of ambroosia 'Amrita'.

My question is "If Dhanvantari is the Father of Medicine, who taught Ashwini Kumaras? In which scriptures is there mention of Ashwini Kumaras being taught the secrets of Ayurveda - the Ancient Indian Medical Science."

"In which scriptures is there mention of Ashwini Kumaras being taught the secrets of Ayurveda - the Ancient Indian Medical Science." ?

There are two schools of medicine one is Atreya School which is represented by Charaka and the second is the Dhanvantari School of surgery represented by Shushruta. Brahma who is said to be the first teacher of the universe originally composed the Ayurveda. Having propounded the science of healing, brahma propagated this knowledge through Daksha Prajapati, who taught this knowledge to Ashwini Kumaras.
But in south Rishi Agastya is credited with knowledge of Ayurveda.

The answer of your question is given in Charak Samhita of Ayurveda. It's described in Chapter one – Sutra Sthanam – Shloka No. 4-5 that ,Daksha Prajapati gave this knowledge to Ashwini Kumaras. In these shlokas 4-5 , Hierarchy of transformation of knowledge in Ayurveda is described .

At first, Prajapati received Ayurveda in its entirety as recited by Brahma, from whom the Ashwins (received), and from Ashwins lord Indra received it fully. That is why Bharadwaja , as beseeched by the sages, came to Indra.[4-5] 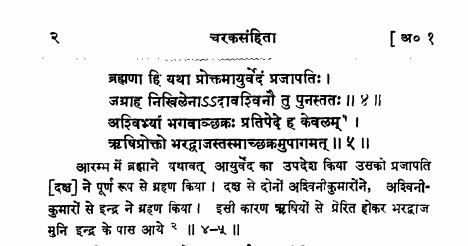 Not the answer you're looking for? Browse other questions tagged puranas ayurveda ashwini-kumaras .