Why Dattatreya is shown surrounded by 4 dogs and cow?

Simple google search with word "Dattatreya" shows many images of lord Dattatreya. but 1 important point to note is in most of those images, lord Dattatreya is shown surrounded by 4 dogs and cow. 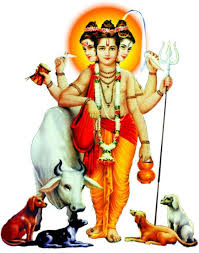 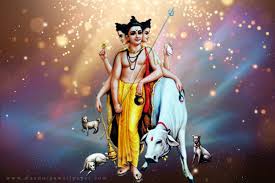 As per Wikipedia Article on lord Dattatreya, the 4 dogs is a symbolism for the four Vedas and mother earth.

he is surrounded by four dogs and a cow, which is a symbolism for the four Vedas and mother earth that nourishes all living beings

Is there a scriptural reference which explains why lord Dattatreya is shown surrounded by 4 dogs and cow?

“In Vṛndāvana there are cows that fulfill all desires [kāma-dhenus], and their number is unlimited. They graze from forest to forest and deliver only milk. The people want nothing else.

Salutations to him who is holy and master of religion, Whose fame is spread by his devotees, And who fulfills all wishes of his devotees, Who always remember him with faith.

This prayer addressed to Dathathreya, Gives victory , profit , fame and desire, Happy life and salvation to the one To the one who recites it regularly with faith.

Conclusion: kāma-dhenu that fulfill all desires, so does praying Dathathreya, hence cow.

Symbolically, dogs represent loyalty, obedience, devotion, and the Vedas. Bhairava, a fierce form of Shiva, who is worshipped in Tantra, has a dog as his vehicle. Refer

The expression "Vedic" is derived from the Sanskrit word veda, which means knowledge, wisdom or revelation.

My salutations to Dathathreya, Who has a colour of burning camphor, Who takes up the role of the creator, And who is master of the holy Vedas.

Conclusion: Dathathreya a god in the form of a combination of the great trinity consisting of Brahma, Vishnu and Shiva, Brahma created Vedas, Dathathreya master of all 4 vedas & dog symbolic of Vedas, hence four dogs.

Not the answer you're looking for? Browse other questions tagged scripture vedas animals dattatreya .

2
Wolves appear often in religion, with many wandering, houseless people/deities having wolves as companions Why, then, are there no domesticated dogs?
2
Dogs with Dattatreya