what is the thithi, nakshatra, lunar month details of Adi Shankara's birth as documented by any mutt?

I am clarifying my previous question again since without reading the details someone send it to duplicate.

There is little agreement on the birth year and details of shri Adishankaracharya.

I have undertaken 2 research efforts on this query. You can find them below -

With some research, you will easily discover that it is a very difficult task to arrive at the exact date and time of birth of Shri Adishankaracharya owing to limited and contradictory nature of information provided by various sources (the above link). In fact, it is only after several years of his departure that his birth place discovered to be Kalady. It will be fair to assume that no one can be reasonably certain about Acharya’s birth time unless they have concrete evidence or credible sources to rely on.

This research aims to create an understanding of his horoscope from pieces of information available today, spread across various sources. A primitive study of his horoscope will help find newer perspectives to understand his greatness.

Several Shankara Vijayams provide details about planetary positions at his time of birth (luckily, the authors do not significantly contradict each other at any point). The authors of these sources are reputed and honorable individuals of great character, apart from being scholars themselves. Lets look at them here:

“The lagna being placed in a Shubha rasi, in conjunction with auspicious planets, the chaste wife of Shivaguru gave birth to a great son just like Shri Parvathi gave birth to Kumara (Shri Skanda), when Sun, Mars and Saturn occupied their positions of innate strength (Uccha, Mulatrikona or swakshetra) and Guru in Kendra.”

This magnificent work done is the fruit of some detailed research done by the author. In the book, Sastry mentions (on page 32) the names of 10 shankara vijayas and several other authentic sources (on page 33) such as Punyasloka manjari and Guruparampara records present in advaithic mutts, Jina Vijaya, Maddhva Vijaya and Mani manjari which provide insights on planetary positions during Shankaracharya’s birth. The author quotes the birth details of Shri Adishankara from Brihat Sankara Vijaya (not currently available in digital form) written by Chitsukhacharya (a person who claims to be a co-pupil in the same gurukula where Shri Shankara studied during his early) on Page 36 as below: “By the grace of Vrishadrinatha (the lord of vrishadri – vadakunatha swamy, trichur), in the all auspicious Nandana samvatsara of the year 2593 in Kali Yuga (corresponding to 5th century BCE), on a Sunday (Bhanu Vasara), when the sun was in the northern path (Uttharayana), on the 5th lunar day (Panchami Thithi) of the bright fortnight (Shukla Paksha),in the month of Vaishaka (Lunar month), in the asterism of Punarvasu and under the sign of Sagittarius in the zodiac (dhanur lagna), was born, in a miraculous manner, a wonderful male child from the scared womb of Aryamba, the dutiful wife of Shivaguru.”

There is famous sloka quoted by eminent researchers such as BV Raman (in the footnotes of his book, page 30) about the birth day of Shankaracharya (which the mutts agree). Transliterating it here after correcting minor spelling mistakes:

“In the 5th lunar day of the fortnight, on Sunday, at the mid time of Abhijit muhurta, considered auspicious.” (Standalone, it’s an incomplete sentence. Must be a part of a larger paragraph)

BV Raman’s research also quotes some more details (on the same page) that confirm the position of Venus in Meena (exaltation) and Mercury in conjunction with Sun (from the works of Chitsukhacharya and Chidvilasa, whose digital form is not available).

At this juncture, one can wonder as to why can’t the horoscope indicated by BV Raman, be considered authentic and final. This is indeed a valid consideration owing to the scholarly astrologer he was. But the horoscope proposed by him loses its authenticity because BV Raman GREATLY relies on the records on Sringeri math (which states 44 BCE as the year of birth on page 31) for casting the horoscope. Now that Sringeri itself has moved its claim to 788 CE, our faith on Raman’s proposed horoscope unfortunately stands challenged, rendering his proposed horoscope in the realm of doubt. Now, if you are wondering as to how can you consider this blog to be authentic given that the matter in concern (year of birth) itself is hard to prove – my judgement of the horoscope heavily relies on Sanskrit works. I also place my faith on reputed Acharyas and vidwans who undertake the act of composing Shankara Vijayam as a service to the lord (from where I extract my data points).

Horoscope and Validation Basis the above details, what we can infer are as below:

Sources 1, 2 & 3 are in agreement with the above judgement (w.r.t planetary placements of Surya and Chandra) since the Thithi is mentioned to be Panchami, giving about 48 – 60 degrees of difference between Surya and Chandra. Now since Chandra is placed in Punarvasu Nakshatra (81 – 93.33 degrees), there is a 9 degree possibility window making this an astrologically viable combination. The Shukla Paksha proves that Chandra is ahead of Surya in the zodiac belt (in agreement).

Let’s take planets revolution period (in days for accuracy), their current positions and simultaneously reverse calculate their positions 2525 years ago (with reasonable accuracy) and see its match against the slokas. This can be further validated in predictive sense to arrive at an accurate position.

** This is arrived by subtracting the MOD value from their current position. Reasonable exemptions (minimal) are taken into account since exact calculations is not viable. I agree that it can affect accuracy but I am convinced. Try it for yourself and let me know in case you find DRASTICALLY different results). Also Since traditionally the years start in April and we are just 2/3 months away from the start of the 5118th year, this can compensate for the decimal difference spread over 2500 years. So, my conclusion of the horoscope (by above method) is 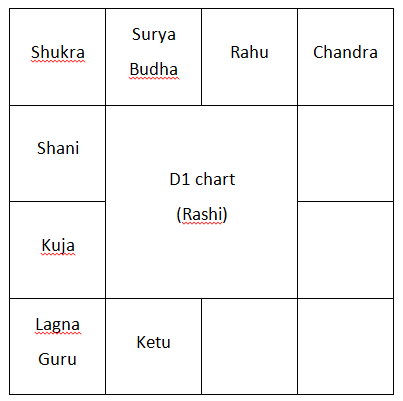 The ultimate validation of the horoscope lies in its ability to correctly explain life events. No human is capable of undertaking an IN-DEPTH analysis of an incarnation’s horoscope. So, my humble attempt is to SUPERFICIALLY interpretation it (where I welcome criticism by scholars) against information we know for sure so as to substantiate the chart. Details are as follows:

The Ayu for one who has taken Jeeva Samadhi is very difficult to attribute, similar to the tale of Ayu predictions done for Shri Yati Raghavendra (Deity at Mantralayam). The tale mentions that 3 different predictions were made, one around 100, second about 500 and third about 750. While the Samadhi of Shri Shankara is claimed to be present at Kedarnath (at Kanchi by few - controversy), no one saw him attaining his ‘death’.

All said and done, this horoscope needs more research to defend or deny its accuracy.

Shankara was born to Aryamba and Shivaguru, a Nambudri Brahmana who belonged to the Vedic branch of Krishna Yajur Veda. Shankara’s birthplace was Kalady in Kerala, on the banks of the Poorna river. Kalady is situated a few miles from Tiru Shiva Perur (present-day Trichur), which contains the Shiva mound Vrischachala where Shivaguru and Aryamba prayed and were blessed with the divine child. **This event of the birth of Sri Shankara in 788 A.D that marked the beginning of the revival of the Vedic system is described thus in the Madhaviya Shankara Vijayam – ‘Just as the Divine Mother, Parvati begot Sri Subrahmanya, the virtuous Aryamba begot Sri Shankara on the auspicious Vaisaka sukla panchami (fifth day of the waxing moon during April-May) in the year 788 A.D, when the star attributed to Lord Shiva, Arudra was in ascendance with the Sun, Saturn, Jupiter, and Mars in exaltation.’ –

You can read Madhaviya Shankara Digvijayam at here.
Quoting the text related to the mentioned verse:

71-82) At the birth of the baby the planetary position was as follows: The Lagna was fully aspecled by the benign planets like Guru Mars, Sun and Saturn were exalted and Guru was at the zenith. It was an easy delivery, as if Parvathi were giving birth to Skanda. At the sight of his son's face, Sivaguru was drowned in a sea of joy. Somehow controlling himself, he proceeded to bathe for performing the post-natal rituals, and bestowed much wealth as Dakshina on pious Brahmanas as part of those rites.

Not the answer you're looking for? Browse other questions tagged history adi-shankaracharya .

9
What is the Birth date of Adi-Sankarācharya?

1
What is Purva Paksha according to Hindu scriptures?
8
What arguments Adi Shankara makes to claim that Supreme is devoid of any attributes?
9
What is the Birth date of Adi-Sankarācharya?
8
Apart from the Padma Purana, does any other Purana say that Adi Shankaracharya will teach mayavadi philosophy?
10
If the Vedas say human lifespan is 100 years, how can humans live for thousands of years in previous yugas?
5
What is the context of Adi Shankara's statement “Woman is the gateway to hell” found in his work Prashnottari?
3
What was Shankara's stand on Bhairava Agamas?
7
Why does Adi shankaracharya think that self cannot perceive a relation between itself and avidya?