Who is Ratri devi? Is she same or different from Devi Kaali?

1.WITH all her eyes the Goddess Night looks forth approaching many a spot: She hath put all her glories on.

2 Immortal. she hath filled the waste, the Goddess hath filled height and depth: She conquers darkness(Tamas) with her light.

3 The Goddess as she comes hath set the Dawn her Sister in her place: And then the darkness vanishes.

4 So favour us this night, O thou whose pathways we have visited

As birds their nest upon the tree. 5 The villagers have sought their homes, and all that walks and all that flies, Even the falcons fain for prey.

6 Keep off the she-wolf and the wolf, O Urmya, keep the thief away; Easy be thou for us to pass.

7 Clearly hath she come nigh to me who decks the dark with richest hues: O Morning, cancel it like debts.

8 These have I brought to thee like kine. O Night, thou Child of Heaven, accept This laud as for a conqueror.

Now this is a hymn dedicated to Goddess of night Ratri devi. In this hymn She is called the conqueror/destroyer of darkness/Tamas and She shares similar function of devi Kaali of the Agamas. So, is there a difference between two goddess or Is Ratri devi a form of Kaali maa?

You must be knowing about Sri Chandi, which is also known as the DurgA Saptashati or the Devi MAhatyam and which is a part of the MArkandeya PurAna.

Now, a Chandi PAtha is considered to be flawed or incomplete if all the Shad-Angas ( the Kavachas, the Rahasya Trayas etc) are also not chanted along with. So, chanting simply the slokas of Sri Chandi is not enough. One who does so is said to be cursed by Devi.

And, it is also mandatory to chant two Suktas from Rig Veda as an allied part viz- the Rig Vedokta Devi Suktam (which is discussed in this answer to your another question) and the RAtri Suktam ( Rig Veda Mandala 10, Sukta 127).

A correct Chandi recital actually comprises of the following (in that order):

Only thereafter Sri Chandi is to be recited. Now, all these allied recitals are Devi related. So, without any doubt the RAtri Suktam is Devi related and Goddess RAtri is an aspect of JaganmAtA , the Mother of the universe, who is praised in the Chandi.

The Sankalpa Mantra for the recital of RAtri Suktam, as a part of the Sri Chandi recital, is as follows:

For the RAtri Sukta, seer is Kushika, deity is RAtri, meter is GAyatri and, it is recited before reciting Saptashati, for pleasing the Mother of the universe (or Goddess DurgA).

Now, in the following mantra from the RAtri Sukta, there is no difference between Goddess RAtri and ParAshakti :

The Eternal Goddess RAtri (or mahAmAyA) pervaded the whole creation, the small herbs and the tall trees with her Consciousness. And destroyed the ignorance (Tamah) by her illumination (JyotishA).

However, in these Mantras at one place, Goddess RAtri is described as having a sister called UshA and at another place she is said to be daughter of Supreme-Ether (ParamAtman).

The Goddess RAtri destroys the enveloping-power (avidyA) of her sister UshA ( swasAram=own sister). And in such a state of UshA, the veil of ignorance falls apart.

O Goddess RAtri, Just like a milk cow (gA iva), i have appeased you, [by stuti-japa] (Akaram). You are the daughter (duhita) of ParamAkasha-ParamatmA (Duhitardivah). By your grace and blessings we will defeat our enemies like lust etc. Be pleased with our Hymns and Havi (offerings).

But Goddess KAli of the Tantras is the Supreme Parabrahman who does not have any sister and who obviously is the Eternal and the Primordial ( AdyA) one. So, she can not be born of something/someone.

On the contrary, it's from her, numerous universes take birth. Even the Trinities were born from her.

The same is stated by Lord SadAshiva to Sri AdyA in the MahAnirvAna Tantram:

The whole creation has evolved out of you. O Shive! You are the Mother of the universe. O Bhadre! From Mahat-Tattva till the atoms, the subtle-gross, the mobile-immobile-universe was created by you. The universe is under your supreme control and you are the primordial. All forms of knowledge and we all are created from you.

So, we can not really map the Vedic Goddess RAtri to the Supreme Goddess KAli of the Agamas. But we can reconcile. And in the following way:

It is well known that, Mother Goddess is also known by the name MahAmAya. Now, this MahAmAya can be of two types as said in the following verses:

VidyA (Knowledge) and AvidyA (Ignorance) are the two forms of MahAmAya. The aspect which is the reason of liberation is VidyA and the one which causes worldly bondage is AvidyA.

So, we can map the VidyA aspect of Mother Goddess to the Vedic Goddess RAtri. Just like the opposites Alakshami-Lakshmi (viz-the Sri Suktam) are sisters so are VidyA-AvidyA and both of them are born of Sri AdyA (who is KAli, DurgA or Chandi etc). So, RAtri having a sister as well as being born, both facts are thus reconciled.

The Eternal VidyA is Supreme. She is the mother of liberation as well as being the reason for worldly bondage (SamsArabandhana). And she is the Supreme controller of all the Godheads.

And, BTW, there is also another RAtri Suktam from the BrAhmanas. The Mantras from this Suktam alludes to a few more-known attributes of the Mother Goddess (like She is holding the PAsha, She being a Yuvati etc):

The MahAmAyA Goddess (RAtri Devi), who appears again and again (Punarbhum)[for the destruction of the Demonic forces], who is the giver of bliss-happiness to all beings, who is Shikhandini ( wearing a an ornament made of peacock feathers), who holds the weapon PAsha, who is Yuvati ( denotes the fact that she is devoid of childhood and old age and thus denotes her eternal nature) and who is the sum total of all KumAri etc Shaktis; I seek refuge in (prapadye) such Goddess RAtri. Let, by her grace, the Sun God protect my eyes (or beautify them) always, the God VAyu protect my five prAnas, the God Soma protect my sense of smell, the God Varuna protect all the fatty elements in me, the Moon God protect my mind and the Earth God protect my body.

This RAtri Suktam#2 is also chanted as an Anga of the Sri Chandi recital.

There is no direct relation between goddess Ratri of Rig-Veda and goddess kali of Agama and Tantra. Let's see this with some points.

Here in Rig-Veda Ratri Sukta of Mandala 10-Sukta 127. goddess Ratri is depicted as sister of goddess usha i.e. dawn - daytime. That means she is the goddess of night as usha is related to daytime. They both are personification s of day & night.

We can clearly see the relationship between them as day & night. As it's said tha Ratri devi accepted / up-coming day-time or goddess Usha as her sister.

Also note that we can't see the word Kali in the sukta , instead word Krishna (black) is used. And it's said that darkness or blackness falls at night time and it vanishishes after the arrival of goddess Usha (dawn , daytime). Instead the characteristic of night i.e. blackness /darkness is only described and this thing is not related to goddess Kali ,as she is completely of different nature and characteristics than this Ratri Devi ,darkness falls upon whose arrival.

Nirrti is a Ketu ruled nakshatra in vedic astrology, strongly associated with Kali in form Dhumavati.

The goddess has a dark black complexion. Similar to Devi Kali. Nirrhiti is also similar to Mahavidyas, Dhumavati. She is also named Alakshmi.

Conclusion- So mostly there seems to be no direct connection between goddess Ratri & goddess Kali.

Further reading - The Book of Kali 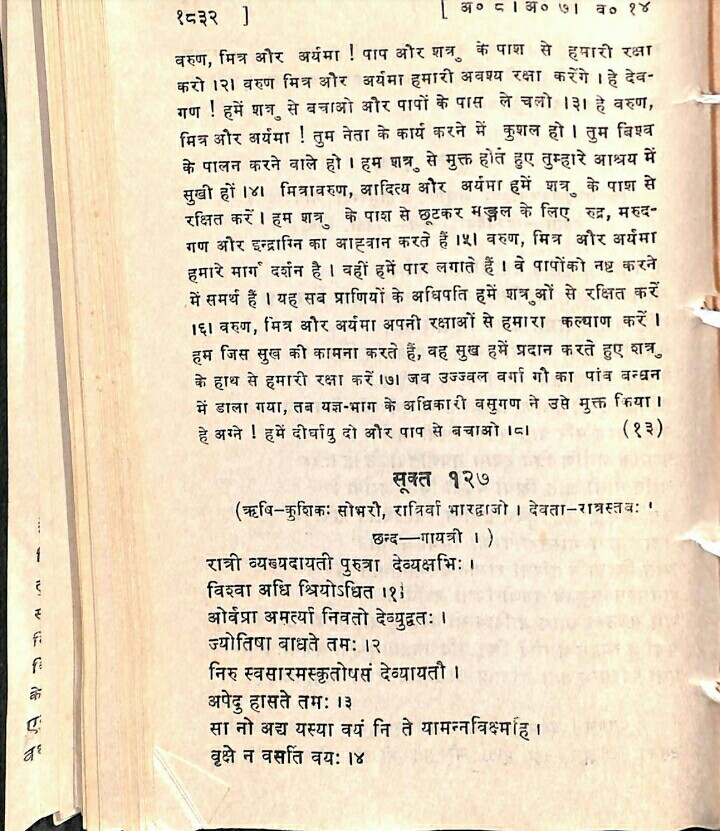 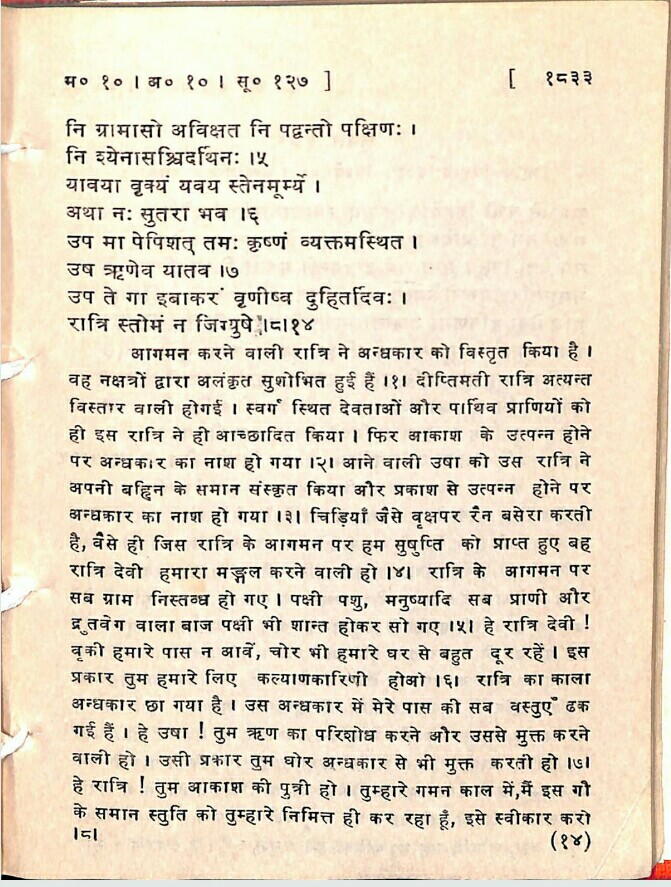 Apart from this verse the term 'Ratri' appears in many other hymns of RigVeda and invariably mean night.In this verse,Rishi praises night in terms of poetic personification where Usha (dawn)is called as sister (swasar) of Ratri and daughter of Day (duhitardivah).

Not the answer you're looking for? Browse other questions tagged vedas agamas devi kali .

7
Who killed Banasura - Lord Krishna or Devi?
0
Why does Devi Mantras contain the name of the Demons She slayed?
9
Who is devi in devi suktam?
7
Was the Atharva Veda compiled at the time of King Parikshit?
3
Who is NityA Devi Goddess
2
Who is Nikumbila devi?