Which Scriptures say Shiva is easily pleased than rest of Gods?

It is said Shiva is easily pleased as is also His name- "AshuTosha" or "Quickly (Aashu) Satisfied (Tosha)".

1. Which Scriptures say Shiva is easily pleased than rest of Gods in Trinity?

Part 10 of Bhagavata Purana and Part 5 of Vishnu Purana

In this regard the Pauranik literature relates the following account:

A snap from 88th Chapter (Release of Lord Shiva from crisis) of part 10 of Bhagavata Purana: 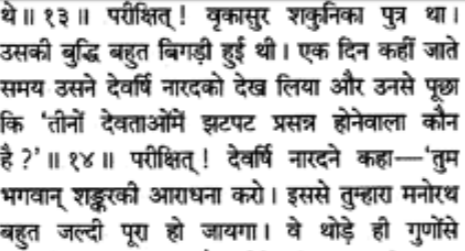 Translation in English : Once the demon Vrakasura asked Narada which god was most quickly pleased, and Narada answered that Lord Shiva was.

2. Why is it said that other Gods are easy to please (specially Shiva) and not Vishnu?

"O Yudhisthira, I take away all the wealth from those whom I bestow my grace. When they are poor, their relatives desert them. I even render their efforts useless when they try to earn money. Thus being unsuccessful repeatedly, the people develop an attitude of indifference for wealth. Then they begin to take shelter as my devotee and mingle with me. Only then, I bestow my full grace on them and they receive me as Sachchidanand Parabrahma. Thus, pleasing me through my worship is extremely difficult.

Hence, ordinary people give me up and worship other deities, which are in fact different forms of me.

Lord Shiva is Ashutosh and bestows his devotees quickly with grace. He gives wealth and other riches to his devotees. But once they get wealth, the devotees become despotic and even forget the God who had blessed them."

3. Such lines are there in each Purana of other Gods too

Yes, because most of the Puranas tell the conversation between two sages.

So, it depends on the faith, devotion and belief of a sage who tells the story.

For instance, take these lines from Ramcharitmanas by Goswami Tulasidasji:

Translation in English: This wealth was granted by Lord Shiva to Ravana after Ravana offered in sacrifice his own ten heads (i.e. had committed to serve Lord Shiva with all five sense organs and five organs of actions as preferred deity) and the same belonged to Vibhishana now which Raghunatha Shri Rama handed him with slight hesitation that it is not a sufficient reward for the divine virtues possessed by Vibhishana.

43
Why doesn't Shiva worship anybody where as Vishnu worships him in all his incarnations?
13
Why Nãrãyana (Vishnu) had to pray Rudra (Shiva) to obtain supreme powers? (excerpt from Mahãbhãrata)
18
Which scriptures other than the Ramcharitmanas mention that during Shiva Parvati marriage ceremony Ganapaty was worshipped?
15
Why “Rama” Nama is called Taraka mantra?
2
Is the roudra weapon really the same weapon as the pashupata weapon?
0
Why Maa Lakshmi says that neither Lord Brahma nor Lord Vishnu only Lord Shiva commands her to move from one place to another.?
7
The Four Curses and a Boon by Devī Sītā