If the Vedas say human lifespan is 100 years, how can humans live for thousands of years in previous yugas?

This answer says that the Vedas say the average human lifespan is around 100 years. If so, how can humans live for 10,000 years plus in previous yugas?

Since every word of the Veda is eternal, this means that in an earlier age when they lived for thousands of years, they were chanting the Veda which speaks of an average age of 100 years. But how would that be possible?

There are a few things I can think of:

1) Those mantras or verses of the Vedas which speak of 100 years were only revealed to Rishis at the beginning of Kali Yuga when the average human life span was 100 years, and in previous yugas Rishis would hear those mantras having life span of thousands of years.

2) Only kings and rishis lived for thousands of years, whereas everyone else lived for 100 years.

Even the Bible mentions humans living 1000 years in earlier eras and then the lifespan gradually decreasing.

As far as I know (and I have not read all of the Vedas), Vedas don't explicitly say that human life span is 100 years, but there are definitely some Mantras in them that suggest that the Parama Ayu of a human being might be just that.

For example, see the following Mantra:

So, when the ParamAyu suggested by this Mantra is clearly 100 years, but living for more than that duration is not ruled out explicitly.

From what I have read so far, the Mantras almost always do indicate that complete lifespan is that of 100 years. For example, we often find such prayers in the Vedas like - "May we live for 100 years/winters/autumns" etc.

But the following Mantra from the Atharva Veda is also talking about 1000 years of life.

Now, after the Vedas, the highest authority belongs to the Smritis (this rule is well known, but if you want I can cite sources) And, the figures that Manu Smriti gives are not "unbelievable" by any means.

(Men are) free from disease, accomplish all their aims, and live four hundred years in the Krita age, but in the Treta and (in each of) the succeeding (ages) their life is lessened by one quarter.

And, we can rule these figures out only if they are in direct contradiction with the Vedas. Otherwise, we have to accept them as authoritative.

(BTW, the Parama Ayu, that the Agamas suggest is also 100 years.)

In the Mahabharata it is repeatedly confirmed that that Krita lasts 4000, Treta lasts 3000 years, Dwapara last 2000 years, Kali lasts 1000 years. It also says these years overlap and the overlap is 20%. Overlaps must be inclusive not exclusive. So there is a mix yuga as well at the beginning and end of each yuga which is very logical. Nothing changes abruptly. The assumption that the years quoted above are divine and hence will become very huge numbers may be a misunderstood assumption ( as it appears in brackets) made by translators. Many verses that show planetary positions in the Mahabharata has also been mistranslated.

Age is a factor of time and yuga is just one of the factors in time. Only those with a higher divinity ( paramatmamsa )in them can live longer. This is my interpretation from what i have understood from studying the various texts written by the Rishis.

"Vyasa said, 'Only Brahma, which is without beginning and without end, unborn, blazing with effulgence, above decay, immutable, indestructible, inconceivable, and transcending knowledge, exists before the Creation. The Rishis, measuring time, have named particular portions by particular names. Five and ten winks of the eye make what is called a Kashtha. Thirty Kashthas would make what is called a Kala. Thirty Kalas, with the tenth part of a Kala added, make what is known as a Muhurta. Thirty Muhurtas make up one day and night. Thirty days and nights are called a month, and twelve months are called a year. Persons conversant with mathematical science say that a year is made up of two ayanas (dependent on sun's motion), viz., the northern and the southern. The sun makes the day and the night for the world of man. The night is for the sleep of all living creatures, and the day is for the doing of action. A month of human beings is equal to a day and night of the Pitris. That division (as regards the Pitris) consists in this: the lighted fortnight (of men) is their day which is for the doing of acts; and the dark fortnight is their night for sleep. A year (of human beings) is equal to a day and night of the gods. The division (as regards the gods) consists in this: the half year for which the sun travels from the vernal to the autumnal equinox is the day of the deities, and the half year for which the sun travels from the latter to the former is their night. Computing by the days and nights of human beings about which I have told thee, I shall speak of the day and night of Brahman and his years also. I shall, in their order, tell thee the number of years, that are (thus) for different purposes computed differently in respect of the Krita, the Treta, the Dwapara, and the Kali yugas. Four thousand years (of the deities) is the duration of the first or Krita age. The morning of that epoch consists of four hundred years and its evening is of four hundred years. (The total duration, therefore, of the Krita yuga is four thousand and eight hundred years of the deities). As regards the other yugas, the duration of each gradually decreases by a quarter in respect of both the substantive period with the conjoining portion and the conjoining portion itself. (Thus the duration of the Treta is three thousand years and its morning extends for three hundred years and its evening for three hundred). The duration of the Dwapara also is two thousand years, and its morning extends for two hundred years and its evening also for two hundred. The duration of the Kali yuga is one thousand years, and its morning extends for one hundred years, and its evening for one hundred. These periods always sustain the never-ending and eternal worlds. They who are conversant with Brahma, O child, regard this as Immutable Brahma. In the Krita age all the duties exists in their entirety, along with Truth. No knowledge or object came to men of that age through unrighteous or forbidden means. In the other yugas, duty, ordained in the Vedas, is seen to gradually decline by a quarter in each. Sinfulness grows in consequence of theft, untruth, and deception. In the Krita age, all persons are free from disease and crowned with success in respect of all their objects, and all live for four hundred years. In the Treta, the period of life decreases by a quarter. It has also been heard by us that, in the succeeding yugas, the words of the Vedas, the periods of life, the blessings (uttered by Brahmanas), and the fruits of Vedic rites, all decrease gradually. The duties set down for the Krita yuga are of one kind. Those for the Treta are otherwise. Those for the Dwapara are different. And those for the Kali are otherwise. This is in accordance with that decline that marks every succeeding yuga. In the Krita, Penance occupies the foremost place. In the Treta, Knowledge is foremost. In the Dwapara, Sacrifice has been said to be the foremost, In the Kali yuga, only Gift is the one thing that has been laid down. The learned say that these twelve thousand years (of the deities) constitute what is called a yuga. A thousand such yugas compose a single day of Brahman. 3 The same is the duration of Brahman's night. With the commencement of Brahman's day the universe begins to start into life. During the period of universal dissolution the Creator sleeps, having recourse to yoga-meditation. When the period of slumber expires, He awakes. That then which is Brahman's day extends for a thousand such yugas. His nights also extends for a thousand similar yugas. They who know this are said to know the day and the night. On the expiry of His night, Brahman, waking up, modifies the indestructible chit by causing it to be overlaid with Avidya. He then causes Consciousness to spring up, whence proceeds Mind which is identical with the Manifest.'"

The below of the sanskrit version from the same chapter 231 for anyone who is adept in Sanskrit . 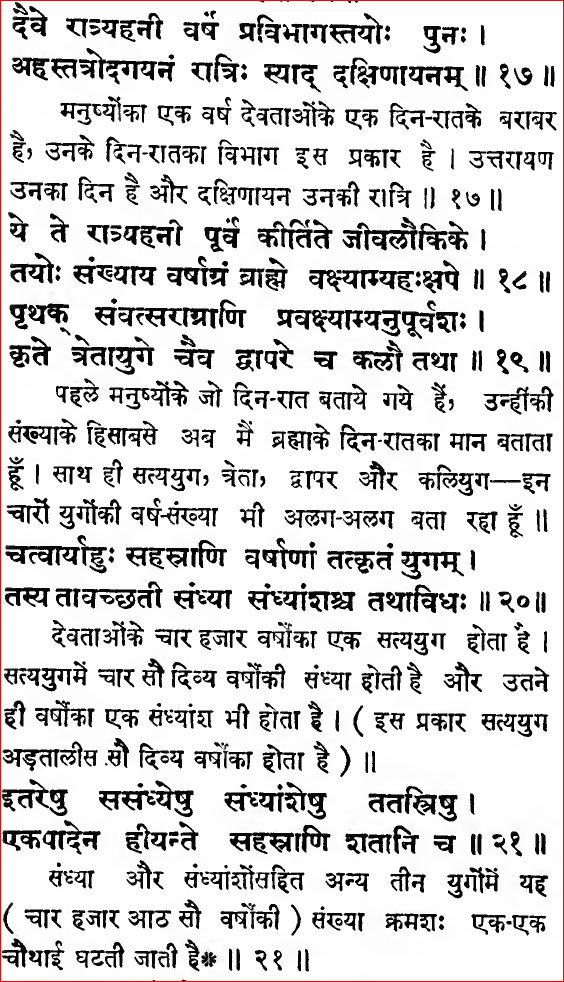 Not the answer you're looking for? Browse other questions tagged vedas puranas history yuga smriti .

21
How could octogenarian heroes fight in Mahabharata?
6
Lord Shree Rama ruled his kingdom for 11000 years?
5
How many years did Lord Vishnu's human incarnations live for?
3
How is it possible to do a sacrifice of one thousand years in Kali Yuga?
0
What is average lifespan of humans according to puranas in different yugas?

11
Yuga changes and age difference
14
Ramayana ➡ Mahabharata: 31 Ikshvaku Kings. What was the (average) age of those kings?
2
Smaller cycles of Kaala or Time
16
Are we in Kali-Yuga's pre-Sandhi period?
6
What scriptures discuss Krishna's time in relation to the Yuga Sandhi periods?
6
Do Smriti Shastras have any provision that allows changes with time?
6
Where has it said in the authentic scriptures, that a year in the Yuga schematic of Manu is actually a Daiva year?