A video (unable to find it now) that i watched on Youtube says- On the middle of our right palm resides the Sowmya Tirtha ( related to the Deity Soma). And, on the same place, in our left hand, resides the Agni Tirtha (related to Deity Agni).

The video said that the description given in it is as per the Bhavishya Purana.

Now, there is a difference of opinion it seems. Because, the book Nitya Karma Puja Prakash (Gita Press), says that it's exactly the other way round. That is, it's the Agni Tirtha which is on our right palm and Sowmya Tirtha on the left.

Which of the two descriptions is correct? Can someone verify from the Bhavishya Purana?

NOte- These Tirthas are related to certain Vedic rituals. So, that is the only tag i could find as being apt here.

Agni and Saumya are different names of the same tirtha found on the right hand only.

Here is what the Bhaviṣya Purāṇa Brāhma Parva Chapter 3 says:

Oh King, five tirthas in the right hand of Brahmanas are heard off - (1)Devatirtha, (2)Pitrtirtha (3)Brahmatirtha, (4)Prajapatya and (5)Saumya. Beyond the base of the thumb is the Brahma tirtha as per Vasishtha and other foremost Brahamanas. At the base of the little finger is the Ka (Prajapatya), at the tip of the fingers the Daiva, between the thumb and index finger is called the pitrya. In the middle of the hand is the Saumya which is famous for Deva worship.

As per the above Vasistha and others have described the five tirthas of the hand, which obviously leads one to verify the kalpasutras by eminent brahmanas, the most important being Vasishtha. In this regard, the Vasiṣṭha Dharmasutra 3.67 mentions that the middle of the hand is called the Agni tirtha, thought the other tirthas are somewhat inconsistent with the majority of texts. The views of other eminent brahmanas are as follows:

A Brahmana's right hand has the five tirthas. In the middle of the fingers is the devatirtha, at the tips the Rishi tirtha, in the middle of the hand is the Agni tirtha; between the thumb and the index finger the pitr tirtha and beyond the line at the base of the thumb is the Brahma tirtha

Here it can be seen that there is a slight inconsistency as regards the placement of the deva tirtha and rishi tirtha, but the Bodhāyana Dharmasutra 1.5.8.15-16 clarifies that the deva tirtha is at the tips and rishi tirtha at the base. The above seems to be a possible minor error in copying the manuscript. The exact position can be better understood from the Padma Purana (given below) and Agni Purana (referred to in the nitya puja prakash)

On the right hand, the middle part of the palm is the part sacred to Agni....

and many more. About Saumya tirtha, I could only find one other reference from the Padma Purana where the Saumya tirtha aspect has been dealt with very clearly. It says that the middle part of the hand is sacred to Agni as well as Soma.

Generally in rituals the right hand is preferred and as per the above scriptures too we do not see mention of the left and right hand having different tirthas, as against the Nitya Karma Puja Prakash. They have drawn reference from only the Agni Purana in that. Thus it is safe to assume, based on the majority view and especially the Padma Purana, that the Agni and Saumya tirtha are different names of the middle portion of the right hand only, sacred to both deities. 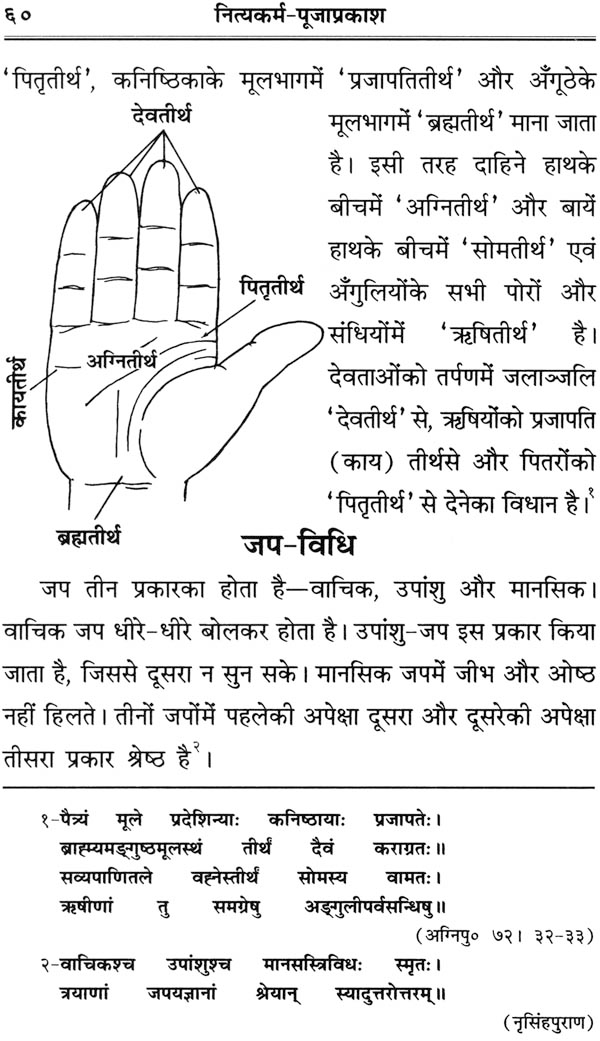 Not the answer you're looking for? Browse other questions tagged rituals .

8
Why at the end all the fruits of the efforts are offered to Krishna and not Rama etc?
3
When and how to tie the shikha शिखा and scripture recommendations regarding it?
5
In the marriage function the couples to see the sky for vashistar and arundathi stars?
1
Is the Bramhamuhurta timing different for mumbai and delhi?