What is the authentic life story of Ramanuja?

I came to know that most of the life stories of rAmAnuja are actually Hagiographies which were written centuries after his life.

Further, there are also sectarian Hagiographies on him. Several things including his life span and other life events have been questioned by modern scholars and historians.

They place his life in the period of 1017–1137 CE, yielding a lifespan of 120 years. These dates have been questioned by modern scholarship, based on temple records and regional literature of 11th- and 12th-century outside the Sri Vaishnava tradition, and modern era scholars suggest that Rāmānuja may have lived between 1077-1157 (about 80 years).

A number of traditional biographies of Rāmānuja are known, some written in 12th century, but some written centuries later such as the 17th or 18th century, particularly after the split of the Śrīvaiṣṇava community into the Vadakalais and Teṉkalais, where each community created its own version of Rāmānuja's hagiography. The Muvāyirappaṭi Guruparamparāprabhāva by Brahmatantra Svatantra Jīyar represents the earliest Vadakalai biography, and reflects the Vadakalai view of the succession following Rāmānuja. Ārāyirappaṭi Guruparamparāprabhāva, on the other hand, represents the Tenkalai biography.[citation needed] Other late biographies include the Yatirajavaibhavam by Andhrapurna.

Modern scholarship has questioned the reliability of these hagiographies.

In such a situation where each sect have made own versions of biographies to suit their views.

How then can we know which one is authentic and reflects history?

Yes, probably the oldest reliable biography of Sri Ramanujacharya is Yatiraja Vaibhava written by Andhrapurna (Tamil: vaduga nambi) one of the direct disciple (Shishya) of Ramanujacharya. 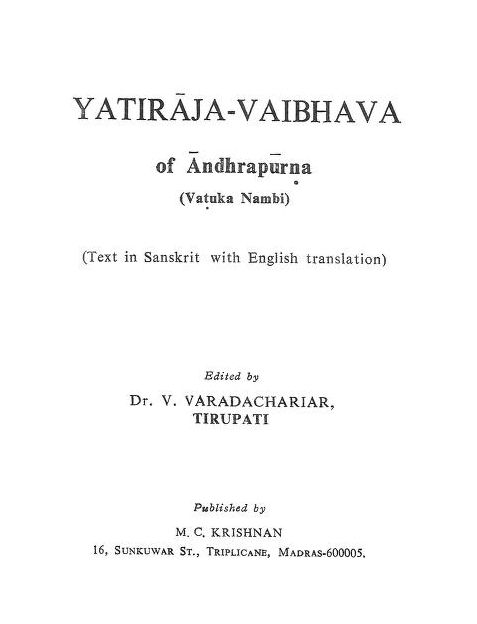 You can find it on Internet Archive: Yatiraj Vaibhava by Andhrapurna, Sanskrit text with English translation. Which is of around 100 verses only.

Note: It seems that the book is removed from Internet Archive, alternatively you can get it from acharya.org

Not the answer you're looking for? Browse other questions tagged history sri-vaishnava ramanujacharya .

12
Why did Sri Ramanuja refuse to hail Shiva? What was the need to prove that Vishnu is the one true God?
7
Why did rAmAnuja abandon his first guru?
6
Why was rAmAnuja refused initiation for 17 times?
0
Ramanuja and Chellapillai
2
What Ramanuja says about the concept of Ishta-Devata