Whose avatar was SripAda Srivallabha?

One of the well known spiritual guru of India was SripAda Srivallabha.

Sree Sripada Srivallabha was Kaliyuga incarnation of Lord Dattatraya. The story of his incarnation is described in the 15th century book Shree Guru Charitra. Which is considered as authoritive among devotees of Datta Sampradaya - We here can Download the book.

The story of Sripada Srivallabha as an incarnation of Dattatray is described in Chapter 5 - Birth of Shripad Shri Vallabha - Page no 12.

According to the book Pleased by the devotion of a Brahmin women called
Sumatha in Peethikapuram (Andhra Pradesh) , and upon her request of a son like Dattatreya himself Shree Dattatreya blessed her and took birth from her womb.

Shri Datta said, 'You will have a son well known in KaliYuga. You abide by his wishes. He will be learned. He will fulfill all your desires'. Saying this Shri Datta disappeared. Sumatha told this to her husband. He too was much pleased.

In 1320 A.D. in Sri Kshetra Peethikapuram in East Godavari District of Andhra Pradesh Sri Dattatreya Swamy was born as the first Datta incarnation with the divine name of Sripada Srivallabha to the couple Appalaraju Sharma and Sumati. They were Datta devotees and belonged to Aapasthamba sect. Afterwards he incarnated again in Karanjapura in Maharashtra with the name Sri Nrusimha Saraswati.

At the beginning of 20th century Sri Vasudevananda Saraswati who is also known as ‘Shree Tembay Swami’ – an incarnation of Dattatreya , visited Pithapuram in his travel and that time he declared the birth place of Sri Sripada Srivallabha Untill that time people were not much familiar with this fact even the residents of Pithapuram didn't knew this. After this all the people of Andhra Pradesh as well as Maharashtra came to know about the place. From the discussion present in the book we come to know this fact that he was non other than Shree Dattatreya. Also this book is mentioning two other ancient works called " Pyngya Brahmanam’ and ‘Sandra Sindhu Vedam’ ,where it's prophesied that Sripada Srivallabha will be born in Kaliyuga as Datta Avatara.

Sripada Srivallabha is none other than ‘Sri Datta Prabhu’. In Tretha Yuga, Maharshi Bharadwaj conducted a great ‘yajna’called ‘Savitrukathaka Chayanam’ in Sri Peetikapuram. For that, he invited Lord Shiva and Parvathi.According to the boon granted to Bharadwaja, many Mahatmas, Sidda Purushas, Jnanis and Yogis took birth in Bharadwaja Gothra. This fact as well as the fact that Savitrukathaka Chayanam was performed in Sri Peetikapuram was mentioned in ‘Pyngya Brahmanam’. Though they are not seen in other parts of the country, the ‘Pyngya Brahmanam’ and ‘Sandra Sindhu Vedam’ are carefully protected in the village ‘Shambala’ which will be the place of birth of ‘Kalki’ Avatar. When Kali Yugam ends and the Satya Yugam enters, Sripada Srivallabha who is the avathar of Lord Datta, will come to Sri Peethikapuram in physical form. 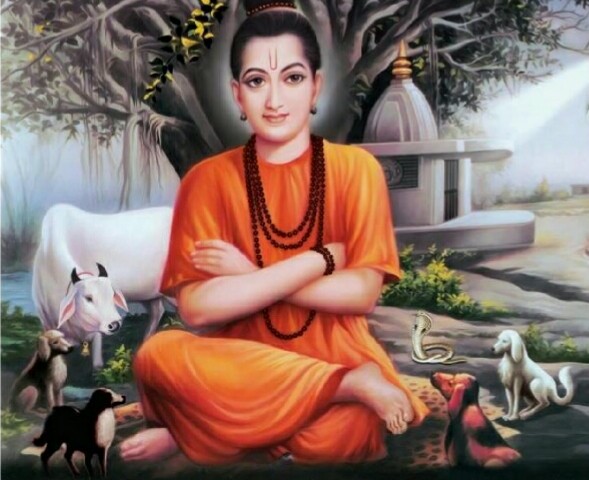 Not the answer you're looking for? Browse other questions tagged avatars tradition bhakti .