What is the story of Sri VadirAja tirtha?

He was a famous acharya in Madhva tradition.

He was considered as a great devotee of lord Hayagreeva.

What was his life story?

Are there any miracles associated with him?

What are his important kritis?

Vadiraja Tirtha is one of the most famous person in the Dvaita Lineage and contributed a lot to the growth of this philosophy. Most of the details about Vadiraja Tirtha can be read in the book, History of the Dvaita School of Vedānta and Its Literature, by B. N. Krishnamurti Sharma. Here is a picture of him taken from this blog. 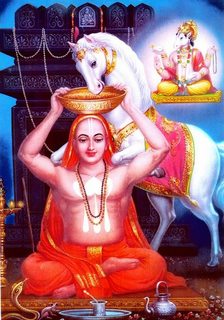 It is believed that Lord Hayagriva used to visit him everyday in the form of a horse and accept his offerings. He used to pray daily at Tapovana, a forest near Sodhe. The most famous hymn in his honor is:

You can also read a short description about him in the book Hinduism: An Alphabetical Guide by Roshen Dalal. A brief story about him and his life is available here.

What was his life story?

Vadiraja Tirtha was one of the two famous disciples of the Dvaita Munitraya, Sri Vyasa Tirtha (the other being Vijayendra Tirtha). He became the head swami of the Sodhe mutt, and succeeded Sri Vagisha Tirtha.

Quoting from the book:

Vadiraja was a native of the village of Huvinakere, near Kurithhisi, in the Kundapur taluk of the S. Kanara district. He is stated to have been a Tulu (Shivalli) Brahmin3 by birth and son of Ramacarya, follower of Samaveda and his wife Gauri (Sarasvati). The couple had two sons by the grace of Vagisa Tirtha. The elder was Varahacarya, who was presented to Vagisa, according to previous arrangement. He was ordained a monk at the age of eight and placed under the care of Vidyanidhi Tirtha, a senior disciple of Vagisa, who however died after a few years, whereupon Vadiraja continued his studies under Vagisa himself and later succeeded him as Pontiff of his Mutt. A life of 120 years is traditionally ascribed to him. There is no doubt he enjoyed a long life and presided over the Mutt at Sode (13 miles from Sirsi, N. Kanara—the "Sonda" of the Gazetteers and Buchanan) established by him, for a number of years. He seems to have had two headquarters—one at Udupi and the other at Sode, where he passed away.

He is believed to have lived for 120 years, and passed away in 1600. His Vrindavana is present at Sodhe, which is very near to Sirsi, in Uttara Kannada district of Karnataka. The mutt is known as Sondha Sri Vadiraja Mutt. Photography is not allowed inside the mutt, here is one of the photos which I've taken: 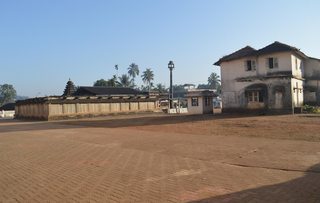 There is a photo of the brindavana available online on http://madhwavivaha.blogspot.com/ 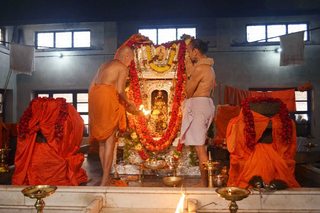 Are there any miracles associated with him?

Many of his miracles are mentioned in the book According to Tradition: Hagiographical Writing in India by Winand M. Callewaert and Rupert Snell. I'm quoting just one of them here, but I advise you to read all of them:

Vadiraja wishes to perform a pooja in Delhi, but the local people tell him that the spot he has chosen for his worship is a bad one, since the son of the Turkish king is buried there. Vadiraja then says that the prince is alive, and he makes him rise from the grave. The king wishes to reward Vadiraja with gold, but Vadiraja throws it into the Ganges

Another important character is that of Bhootaraja. From the book Date, Life AMD Works OF Vadiraja

Vadiraja was of a many sided personality. It is said that# under his occult power there was a mysterious goblin (Bhutaraja) who served Vadiraja closely and devotedly This Bhutaraja at the instructions of Vadiraja did many miracles. It is said that this Bhutaraja at the order of Vadiraja went to Badarikaferama and brought the Trivikrama-idol with the chariot Vadiraja installed that idol in the newly constructed temple in Sonda. He also placed the stonechariot there which could be seen even today.

There are many miracles that occur to this date, which people have written about in their blogs. (I could add my personal occurrence, but it would not be allowed here).

As Vishal mentions in a comment, Hayagriva once came to the rescue of Vadiraja Tirtha. This story is mentioned in the same book, which is, According to Tradition: Hagiographical Writing in India by Winand M. Callewaert and Rupert Snell.

evil-doers try to poison Vadiraja, but the poison ends up in the offering to Hayagriva which Vadiraja as always holds in a platter placed on his head: the god comes in the form of a white horse and places his front legs on Vadiraja's shoulders in order to reach the platter and eat. This time the horse turns green, explains to Vadiraja what has happened and says that the evil-doers will die the next day. For several days Vadiraja serves the god special food so that he may recover completely, but in the end a green stain remains on the neck.

What are his important kritis?

Vadiraja contributed a lot to the Dvaita literature. His pen name was "Hayavadana". Wikipedia lists a few of them in detail. From there:

BNK Sharma states that he was a "prolific writer" and had more than 105 works. He mentions that of these, more than a dozen are major original works. Two of these books are available online, Yuktimallika (available here and Bhugola Varnanam (available here). All his books are enumerated in BNK Sharma's book.

Not the answer you're looking for? Browse other questions tagged tradition dvaita upasana .

7
Why and how Rath-yatra in Ahmedabad started?
4
What is the difference between Tapas and Dhyana?
4
Tirupathi Laddu Prasadam
2
Was advaita scholar Sri Vidyaranya defeated by Sri Akshobhya Tirtha?
1
What are the different sampradayams (traditions) followed by the mutts established by Adi Shankara?
2
What scriptures talk against tapta mudrAnkana practice?
1
What are the views of Shri Chaitanya Mahaprabhu regarding Dvaita of Shri Madhwacharya?