What is the story of Indra being turned into an elephant by Saraswati?

I'm currently visiting India, and I just went to the Varadaraja Perumal Vishnu temple in Kanchipuram. It's such an important temple that Sri Vaishnavas refer to it simply as "Perumal Koil" or "the Vishnu temple". This is the place where Ramnujacharya received Vishnu's Aaru Varthaigal or six instructions. And this is the place where Brahma was performing a Yagna, and Saraswati wasn't there so he married a local cowgirl just so that he would have a wife to perform the Yagna with. (She went on to become the goddess Gayatri.) When Saraswati found out, she was enraged, and she turned into a powerful river, the Vegavati river, and tried to flood the Yagna. But then Vishnu appeared stopped the river with his body, in what is now the nearby Yatotakari temple.

But my question is about another feature of the temple. The temple contains a golden lizard and a silver lizard, which are believed to cure diseases if you touch them. The story as I understand it goes roughly as follows. Two shishyas of the sage Gautama were offering water in the Varadaraja Perumal temple, when a lizard got into the water. When Gautama found out that they had offered water with a lizard in it, he put a curse on them to turn into lizard. They stayed as lizards for a long time. Then one day, Indra, who had been cursed to turn into an elephant by Saraswati, prayed at the Varadaraja Perumal temple and was freed from his curse. And then Indra freed Gautama's shishyas from their curse. 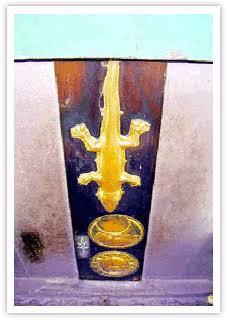 But my question is, why did Saraswati curse Indra to turn into an elephant? Could this be related to the story I mentioned above? Indra might have been helping Brahma perform his Yagna, and Saraswati might have retaliated against him.

Do any scriptures shed light on this? The Sthala Purana of the temple would be a good place to look.

3
What is the story of Narasimha in the Varadaraja Perumal temple?
3
Are there any surviving poems from Thirumazhisai Alwar's disciple Kanikannan?

9
What is the story of Vishnu appearing to sage Markandeya in Thiruvidanthai?
7
Who did Vishnu appear before in Thiruvahindrapuram, Bhumidevi or Bhumadevi?
14
Was the story of adultery of Indra in the story of Ahalya a PRAKSHIPTA?
5
Is the verse about Indra forcing himself upon Ahalyā present in the Critical Edition of Rāmāyaṇa?