Are there any surviving poems from Thirumazhisai Alwar's disciple Kanikannan?

I'm currently visiting India, and I just saw Yatotakari Vishnu temple in Kanchipuram. The story of the temple is that Saraswati turned into the Vegavati river in order Brahma's Yagna in what is now the nearby Varadaraja Vishnu temple, as I discuss here. So Vishnu appeared and stopped the river with his body. But my question is about another story that happened in the temple, which gives rise to its more famous nickname, the Sonnavannam Seitha Perumal temple.

The Alwars (also spelled Azhwars) are a group of 12 ancient Vaishnava saints who lived in Tamil Nadu and are famous for their devotional poetry in praise of Vishnu. It's the beliefs and principles embodied in the Alwars' poems that ultimately gave rise to the Sri Vaishnava sect (of which I'm a member). As I discuss in this question, one of the Alwars was known as Thirumazhisai Alwar. He was the son of the sage Bhargava, but he was raised by tribal people and became a famous Shaivite poet, before ultimately converting to Vaishnavism. 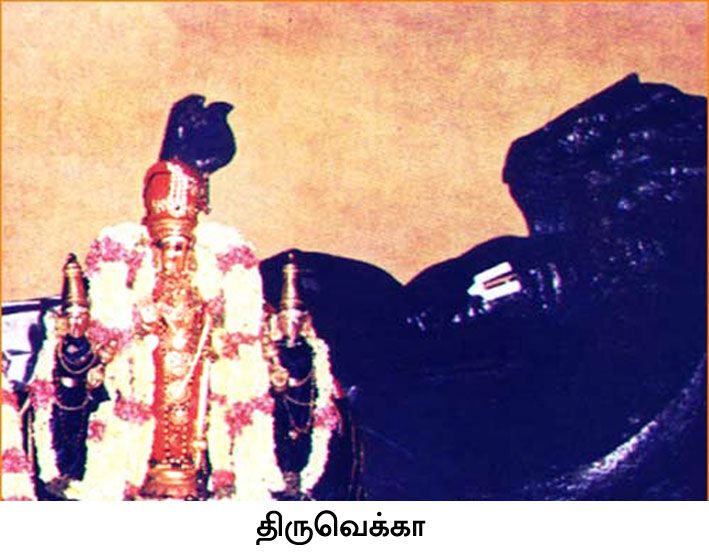 In any case, at some point Thirumazhisai Alwar and his shishya Kanikannan were living in Kanchipuram, worshiping Vishnu at the Yatotakari temple, when one day the Pallava king summoned Kanikannan to his court. The king asked Kanikannan to tell Thirumazhisai Alwar to compose a poem in praise of the king. Kanikannan responded that his guru only composed poems in praise of Vishnu, not human beings. Then the king asked if Kanikannan would at least compose a poem in praise of him, and he offered him gold and jewels in exchange. But Kanikannan refused, saying that he too only composed poems in praise of Vishnu. The king was furious, and exiled Kanikannan from Kanchipuram. When Thirumazhisai Alwar heard what had happened, he decided to leave the city as well, and he told the Vishnu deity of the Yatotakari temple to come with him. And the Vishnu statue got up, and walked out of the city! As soon as the three of them left, Kanchipuram was plunged into darkness. The king realized the errors of his ways and begged Thirumazhisai Alwar and Kanikannan to come back. They agreed, and told Vishnu to come back to the Yatotakari temple. Vishnu came back and lied down from right to left, rather than left to right as usual, as a reminder of how he had left and come back. In any case, it's because of this story that the Vishnu deity of the temple is called "Sonnavannam Seitha Perumal" or "Vishnu who did as he was told." :-)

But my question is, are there any surviving poems in praise of Vishnu from Thirumazhisai Alwar's shishya Kanikannan? Or are they all lost? It's also possible that he wasn't a poet at all, and was just saying that if he were to compose poetry it would be poetry in praise of Vishnu just like his guru's was. Are there any Sri Vaishnava works which shed light on this?

9
What is the story of Indra being turned into an elephant by Saraswati?
3
Why does Thirumazhisai Alwar say the Pandava Thoothar statue of Krishna is older than him?

12
What is the secular account of the compilation of the Alwars' poems?
4
How much does the divinely created statue of Ramanujacharya resemble him?
3
Why does Thirumazhisai Alwar say the Pandava Thoothar statue of Krishna is older than him?
7
Is Dramidacharya the same as Thirumazhisai Alwar?