I'm currently visiting India, and I just went to the Parthasarathi Vishnu temple in Chennai. The main deity of the temple is a statue installed by the sage Vyasa depicting Krishna as the charioteer of Arjuna. The temple is also the place where Thirumazhisai Alwar converted from Shaivite to Vaishnavism. But my question is about another feature about the temple. Even before the arrival of the Krishna statue, there was another Vishnu statue in this place, the Ranganatha statue, similar to the deity of the Sri Rangam temple, depicting Vishnu lying down on the serpent Adiseshan. 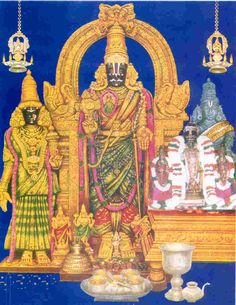 The story of this Ranganatha statue is that Lakshmi was born in this place as Bhrigu's daughter Vedavalli, and Vishnu came as Ranganatha and married her. Here is what the temple website says:

The oldest of the shrines in the temple is that of Sri Mannadha Swamy (SRI RANGANADHAR). It is said that Sri Mahalakshmi in the guise of a young child came away from Her abode- the chest of Maha Vishnu in the Ksheerabdhi Sayanam – due to some misunderstanding (Pranaya Kalagam) with the Lord, to Brindaranya where she was brought up by Bhrigu Maharshi who got her married to Sri Ranganatha, who had come in the guise of beautiful prince to Brindharanya, on Suddha Makha Dwadasi (twelfth bright fortnight) in the month of February-March, which is considered to be very sacred by all, as it is said that Sri Vedavalli has addressed Sri Mannadha to bless all Bhaktas who worship them on that day of Marriage attain all prosperity and salvation or Moksha in the end. There is a separate shrine within the main shrine for Sri Ranganatha who is reclining on Adi Sesha and facing East with his consorts and Brahma in the naval. There are two other images in that shrine one is Sri Narasimha and the other is Sri Varaha facing each other north and south.

My question is, what is the misunderstanding between Vishnu and Lakshmi that led to Lakshmi coming to earth and becoming Bhrigu's daughter Vedavalli? Clearly this is Vishnu's Lila, but I'd like to know the details.

The only other story I know of where Lakshmi leaves the ocean of milk due to a misunderstanding with Vishnu is the story of Venkateshwara, but there she leaves because of Bhrigu's kick, she doesn't become Bhrigu's daughter. It also occurred to me that this story may be connected to the birth of Lakshmi described in this chapter of the Vishnu Purana:

Thus, Maitreya, in former times the goddess Śrí conferred these boons upon the king of the gods, being pleased by his adorations; but her first birth was as the daughter of Bhrigu by Khyáti: it was at a subsequent period that she was produced from the sea, at the churning of the ocean by the demons and the gods, to obtain ambrosia.

But there Lakshmi's mother is said to be Bhrigu's wife Khyati, whereas Vedavalli was found by Bhrigu in a pond. In any case, do any scriptures shed light on this?

7
Who did Vishnu appear before in Thiruvahindrapuram, Bhumidevi or Bhumadevi?
4
What scriptures describe the story of Vishnu's “subservience” to Lakshmi in the Nachiyar Koil temple?
13
Why did Goddess Lakshmi choose Lord Vishnu as her consort?