What is the importance of bull in the Vedas?

We all know about cow's importance in Vedas. If cow is called the mother then bull is the father.

So what are some Vedic verses which glorify the bull?

Even the Mahabharata gives importance to bull by saying "bull among men" etc And, the Vedas too call Gods like Agni as bull.

what are some Vedic verses which glorify the bull?

In AtharvaVeda Kanda 4 -Sukta -11 Anagvaan Sukta. Supreme Brahman ( Ishwara) is symbolically called as bull ,who carries the cart load of this universe.

Prithivi (earth) is held by Ishwara ,who is pulling a cart of this universe and who is in the form of bull. He also holding Swarga Loka (Heaven), Antariksha (Space) as well as all the six directions like east etc. In this way this way this Anagvaan (puller of cart) ishwara is incusive in all the worlds (Universe).

Here Ishwara( Brahman) is said to be a bull who is pulling cart of universe. Here he is compared with bull , who is having power to pull cart of load. 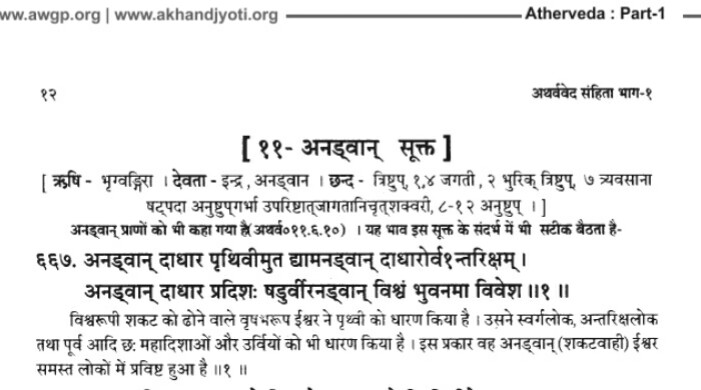 Not the answer you're looking for? Browse other questions tagged vedas gods identification-request animals .

8
Is Shiva's son Kartikeya the rishi of two hymns of the Rig Veda?
23
Aryan Migration theory—evidence for and against it in the Vedas
4
Where do the Vedas mention trees doing Yagnas?
7
Where do the Vedas say the cows of the gods walk on their backs?
9
Who is the greatest personality for an individual?
16
Are Upanishad's really parts of the Vedas?
9
Which Vedic verses declare Lord Brahma as supreme?
7
Which verses in the Vedas describe humans as the same as Pashus?
3
Are these Rigvedic hymns talking about equality of all men or equality among a class of gods?