Who were the kings (other than Kartavirya Arjuna) killed by Lord Parashurama?

Arjuna (son of Kritavirya hence, famously known as Kartavirya Arjuna) was king of Maheshmati. He was from Yadavas or Haihayas (a branch of Yadavas). He is believed to be an incarnation of Sudarshana Chakra. He got boon from Lord Dattatreya which made him so powerful. His greatest deeds were his defeat and imprisonment of Ravana, king of Lanka. Kartavirya Arjuna eventually met his death at the hands of Lord Parashurama.

The above story is found in most of scriptures but there are many other sources which claim that Lord Parshurama killed all the Kshatriya that too 21 time as described here. Mahabharata (in Adi Parva -> Adivansavatarana Parva) even mention that

The son of Jamadagni (Parasurama), after twenty-one times making the earth bereft of Kshatriyas wended to that best of mountains Mahendra and there began his ascetic penances. And at that time when the earth was bereft of Kshatriyas, the Kshatriya ladies, desirous of offspring, used to come, O monarch, to the Brahmanas and Brahmanas of rigid vows had connection with them during the womanly season alone, but never, O king, lustfully and out of season. 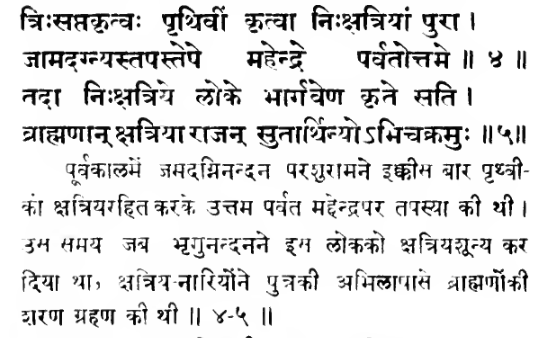 But I didn't come across any story which says that so and so famous king was killed by Lord Parshurama. So, my questions are

Did Lord Parashurama kill any king who was not from Yadavas or Haihayas? If yes, then who were they? If no, then what's the riddle of killing all the Kshatriyas 21 times?

21
What did Kashyapa do with the Earth after he received it from Parashurama?
8
Why did Lord Parshurama kill the Kshatriya kings?

21
What did Kashyapa do with the Earth after he received it from Parashurama?
11
How did Nahusha marry Viraja, daughter of the Pitris?
9
Did Ravana ever meet Parashurama?
8
Why did Vishnu's Sudarshana Chakra incarnate as Parashurama's enemy Kartavirya Arjuna?
8
Why did Lord Parshurama kill the Kshatriya kings?
7
Clarification about Saptarshis of Vaivasvat Manvantar
9
Did Parashurama perform any expiation for killing his mother?