What is the story of Narasimha in the Varadaraja Perumal temple?

I'm currently visiting India, and I just saw the Varadaraja Perumal Vishnu temple in Kanchipuram.  As I discuss in this question this is the site of a Yagna performed by Brahma which Saraswati tried to thwart but Vishnu stopped her. Varadaraja Perumal, the main deity of the temple, is the form of Vishnu that appeared before Brahma in the Yagna. 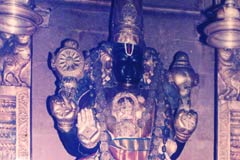 But there is another Vishnu statue in the temple, a statue of Vishnu's incarnation Narasimha the man-lion. Here is what the priest told me about the statue. As I discuss in this answer, it is Vishnu's incarnation Varaha the boar, and not Venkateshwara, who was the original inhabitant of the seven hills of Tirupati. And then Venkateshwara had to get permission from Varaha to stay there. The priest said that similarly, it is Narasimha who is the Sthaladhipati or owner of the place where the Varadaraja Perumal temple is now, and Varadaraja Perumal is just "renting" it from Narasimha.

Does the Sthalapurana of the temple shed any light about this?

32
Are there any temples for Matsya, Kurma, and Varaha avatars?
8
What is the story of Indra being turned into an elephant by Saraswati?