This question is asked by the curiosity created by my previous question.

Are they allowed to put a sight on a sacrifice?

Can they participate in a sacrifice?

Usually no. Given below are the duties of the 4 Varnas.

1.88. To Brahmanas he assigned teaching and studying (the Veda), sacrificing for their own benefit and for others, giving and accepting (of alms).

1.89. The Kshatriya he commanded to protect the people, to bestow gifts, to offer sacrifices, to study (the Veda), and to abstain from attaching himself to sensual pleasures;

1.90. The Vaisya to tend cattle, to bestow gifts, to offer sacrifices, to study (the Veda), to trade, to lend money, and to cultivate land.

1.91. One occupation only the lord prescribed to the Sudra, to serve meekly even these (other) three castes.

Manu Smriti 2.172. (He who has not been initiated) should not pronounce (any) Vedic text excepting (those required for) the performance of funeral rites, since he is on a level with a Sudra before his birth from the Veda

However, they can (and should) offer the Shraddha (as the related Mantra "Swadha" can be recited even without initiation). They can also perform the 5 great sacrifices (the Pancha Maha Yajnas).

[He should be] devotedly attached to his wife, be of pure conduct, a protector of servants and given to the performance of Shraddha. With the recitation of the Mantram-Namas, he should perform the five Yajnas.

So, he can only chant the Mantra "Namas" or Namaha and complete the sacrifices. He should not chant Vaushat, Swaha, Om etc, which are chanted during those sacrifices. As per another Smriti, a Sudra can also similarly perform simple sacrifices called the Paka Yajnas.

No again usually because their touch is considered as impure in the Smritis.

Manu Smriti 3.240. What (any of) these sees at a burnt-oblation, at a (solemn) gift, at a dinner (given to Brahmanas), or at any rite in honour of the gods and manes, that produces not the intended result.

Manu Smriti 3.241. A boar makes (the rite) useless by inhaling the smell (of the offerings), a cock by the air of his wings, a dog by throwing his eye (on them), a low-caste man by touching (them).

But, there is an exception. If a Sudra is law-abiding then he can be employed by an Arya for cooking the sacrificial offerings. Even the Manu Smriti says, such a Sudra is equal to a Vaishya for practical purposes.

Arya men who are pure should cook offering to All-gods. The cook should refrain from speaking, coughing, or sneezing while facing the food. Should he touch his hair, body, or garment, he should wash himself with water. Alternatively, Sudra men under the supervision of an Arya may do the cooking. They are to follow the identical procedure of sipping, with the additional requirement that every day they should shave the hair of their heads, bodies, and beards; clip their nails; and bathe with their clothes on. Alternatively, they may shave only on the eighth day of each fortnight or on new- and full-moon days.

Generally, a Vedic recitation is to be stopped in the vicinity of a Sudra. So, around a Vedic sacrifice (where Vedic Mantras are recited) their presence must not be welcome.

Within sight or hearing of a Sudra or a degraded person, furthermore, vedic recitation is suspended for the duration.

Who is Shudra (or Sudra)

A man, may be born in the Sudra caste, but if he is possessed of good qualities, he may attain the state of Vaisya and similarly that of a Kshatriya, and if he is steadfast in rectitude, he may even become a Brahmana. (Source : Vana Parva: Markandeya-Samasya Parva of Mahabharata)

This is also discussed here:

Can a Sudra become a Brahmin in 'this' birth?

[Nārada Muni:] If one shows the symptoms of being a brāhmaṇa, kṣatriya, vaiśya or śūdra, as described above, even if he has appeared in a different class, he should be accepted according to those symptoms of classification. (Source: Śrīmad-Bhāgavatam (Bhāgavata Purāṇa) 7.11.35)

Manu also had a son known as Dhṛṣṭa, from whom another sect of kṣatriyas was generated, but although they were born of one who had the qualities of a kṣatriya, they became brāhmaṇas." (Source : Śrīmad-Bhāgavatam (Bhāgavata Purāṇa) 9.2)

In addition to these nineteen sons mentioned above, there were eighty-one younger ones, all born of Ṛṣabhadeva and Jayantī. According to the order of their father, they became well-cultured, well-behaved, very pure in their activities and expert in Vedic knowledge and the performance of Vedic rituals. Thus they all became perfectly qualified brāhmaṇas. (Source: Śrīmad-Bhāgavatam (Bhāgavata Purāṇa) 5.4.13

That wretched Brahmana who falls away from his duties and whose behaviour becomes wicked, becomes, O king, a Sudra. (Source: Santi Parva: Rajadharmanusasana Parva of Mahabharata)

Vishvamitra was a kshatriya king earlier. Later, he undertook intense penance and attained brahminhood. This is discussed here.

Now, coming to your questions:

The Sudra is not fit for the sacrifice (the One Day Sacrifices). -Krishna Yajur Veda - Kanda 7 - p1

"Let all the people from all the kingdoms, say Brahmans, Kshatriyas, Vyasyas, Shudras be invited in scores duly honouring them." So said Vashishta to Sumantra. (Dasaratha's Aswamedha yaga)

The Brahmana is the performer or the sacrifices of the three other orders.

A Sudra, is not competent to titter swaha and swadha or any other Vedic mantra.

The Sudra, without observing the vows laid down in the Vedas, should worship the gods in minor sacrifices called Paka-yajnas.

However, same chapter mention that it is not true that the gods and other (Superior) persons do not manifest a desire to share the offerings in such sacrifices of even the Sudra. For, this reason, the sacrifice that consists in devotion is laid down for all the classes. 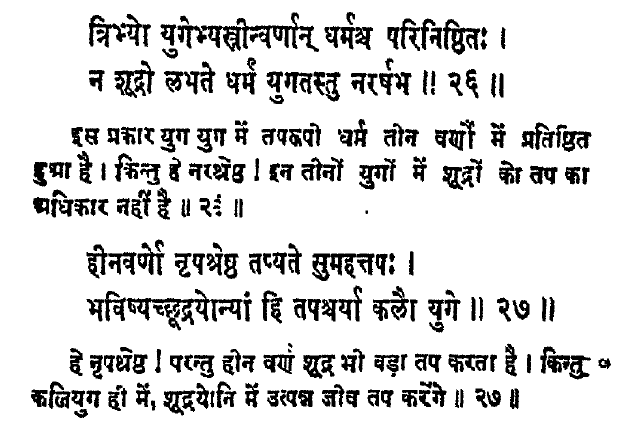 In three Yugas (Kreta, Treta and Dwapara) the Sudras were not entitled to the vitues of devout penances. The degraded caste the Sudras, having thy regeme, have engaged in austere penances. And in the Kali Yuga asceticism shall be established in the Sudras.

So, one can attain any thing by Karma/Action/Tapa:

Bali Maharaj (son of a Daitya) will become next Indra.

Bhakti of Sabri (born in low cast) is believed to be perfect.

Vidura (born from a Sudra woman) is believed one of the most intelligent persons in Mahabharata.

24
Can a Sudra become a Brahmin in 'this' birth?
17
Any references where varna/caste is determined independent of birth/parentage?
13
If a Brahmin doesn't perform duties as per his varna, is he still called as brahmin?
9
What is the meaning of the term "Svadharma"?
7
Brahmarshi Maharishi Rajarshi Devarishi

6
Why does Parashara say to keep a black cat and precious stones in home?
4
Do Vedanta Sutras contradict Vedas on whether mantras can be heard by Shudras?
7
Why is the queen required to sleep next to the dead horse at the end of Aśvamedha Yajña?
4
How come Shankaracharya and some Sri Vaishnava Acharyas prohibit women and shudras from reciting the Vishnu Sahasranama?
6
Why Krishna Yajur Veda 7.1.1.5 is contrdicting RV 10:53:4?
5
Why cannot a Shudra earn wealth as per Mahabharata?
3
Is Hinduism only for Brahmins and Kshatriya men?