Sri Rama and squirrel.. where did this story originate?

There is a famous story about a squirrel helping Sri Rama in building the bridge (Rama setu) to go to Lanka.

A squirrel sees Vanara army accumulating boulders and rocks for the bridge. A squirrel decides to help Sri Rama and picks up sand and pebbles. Sri Rama notices it and appreciates the effort of the squirrel and warmly stroked the back of the squirrel with his fingers. Since then, it is believed that squirrels have three lines on their body.

The moral of the story is to recognise and appreciate the help even when it comes from a small person. 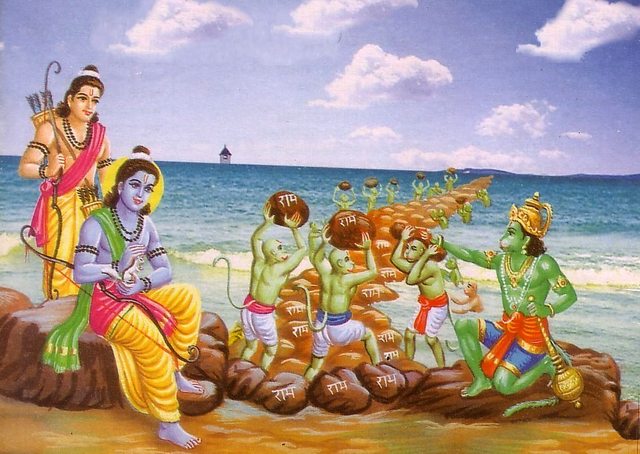 This story is not a part of Ramayana written by Valmiki and Ramcharit Manas written by Goswami Tulsidas. These aren't the only versions of Ramayana. There are many other versions by many poets.

What is the origin of this story involving Sri Rama and squirrel?

From which later versions of Ramayana did this story originate?

Related question: Why do only Indian squirrels have stripes on them?

There are many innovations in this Ramayana.... It narrates [a] moving incident of a squirrel who helped Rama to construct a bridge on the sea. Not necessarily [wwre these] inventions by the poet himself; they could have been appropriated from folk sources[.]

Page 107 of this book says the same thing.

But the story seems to be considerably older than the 14th century, because one of the Alwars, Thondaradippodi Alwar, alludes to it in one of his poems:

Nor am I like the humble squirrel which rolled in the sand and helped, when the monkeys pushed big rocks to build a bridge in the ocean. With a heart full of vice, a heart as hard as wood, infamously I labor, without a single service to the Arangam Lord.

Even by modern dating, Thondaradippodi Alwar dates at least to the 8th century.

So far, I've found the squirrel's story in the Hindi translation of Ranganātha Rāmāyaṇa (RR) and Kṛttivāsa Rāmāyaṇa. However, I couldn't locate this story in the original, Telugu version, of RR.

This, from the Hindi tr. of RR: 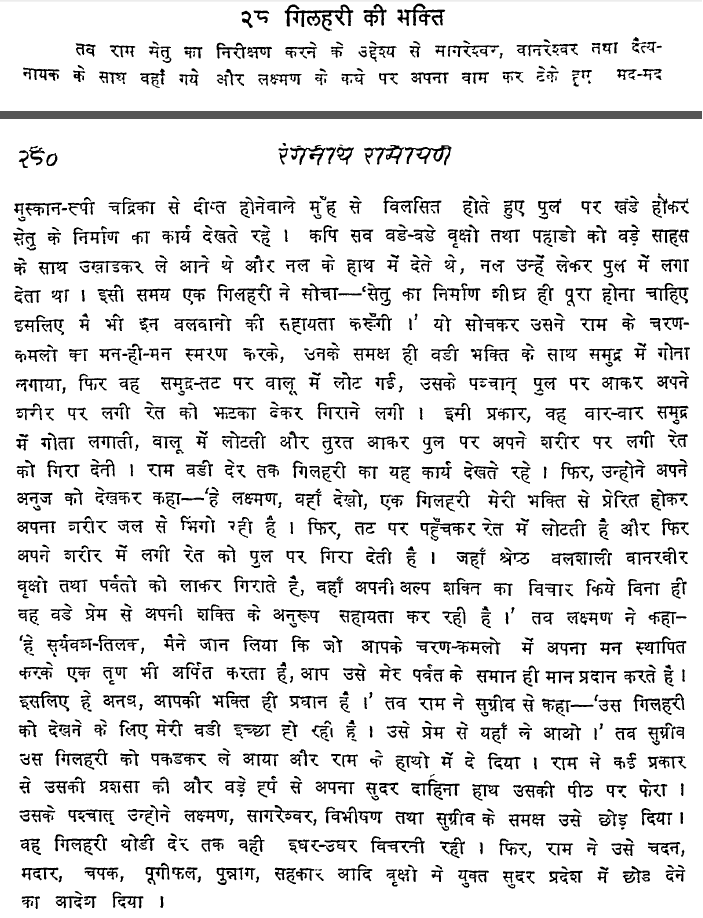 (45) Squirrel's help in the construction of the bridge

The ten yojana long bridge was to be built with the stones and hills brought by Hanuman. Of these hundred yojanas, long bridge construction of only twenty yojanas was completed which was inaccessible. The demons started coming to have a look at it. Close by there was the group of squirrels. They would jump in the sea water, wet their bodies roll over the sand and then shed the sand over the bridge, which helped in plugging many holes in the bridge. Hanuman saw that many squirrels were roaming about there. He tried to get them out by terrorizing them and being unsuccessful in his attempt he caught hold of them all and then threw them here and there. All the squirrels then went to Rama with a complaint against Hanuman and told Rama that they had been terrorized by Hanuman.(82)

All the monkeys then moved on to the bridge. Hanuman said to them, "Listen, O monkeys, do not disturb the squirrels any more."

I found another version of Ranganātha Rāmāyaṇa (Telugu) which does contain the squirrel episode. So it's possible this is the original and not the one I linked above. 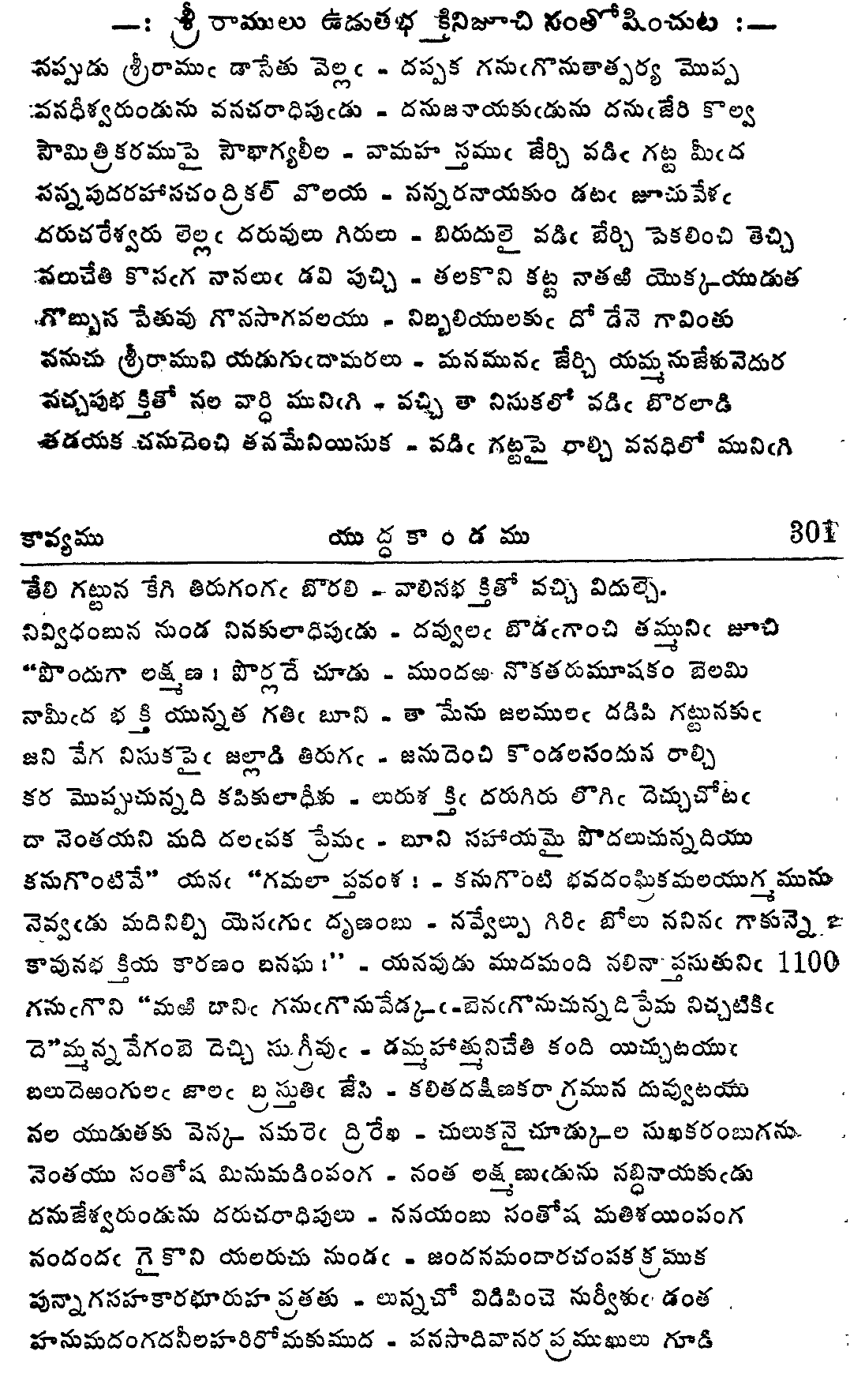 Not the answer you're looking for? Browse other questions tagged ramayana rama identification-request .

8
Why do only Indian squirrels have stripes on them?

8
Did Shree Hanuman have a child from Raavana's daughter SuvannaMaccha?
23
Do animals know God exists?
4
Is the Rama Setu pilgrimage "equally effective" for all pilgrims irrespective of their dwelling places?
5
Where in the Rāmāyaṇa does this quote appear? Who said this?
5
Swa-dharma of Sri Rama and queen Kaikeyi's boons
7
Why did the Sea God (Samudra) not yield to Lord Rama when he was however, willing to help Hanuman using Mainaka?