How the original name of "Jai Samhita" changed to "Mahabharat"?

I heard that the original name of Mahabharat was "Jai Samhita".

Who had originally named as "Jai Samhita" and why?

Who had changed the name to "Mahabharat" and why?

In former days, having placed the four Vedas on one side and the Bharata on the other, these were weighed in the balance by the celestials assembled for that purpose. And as the latter weighed heavier than the four Vedas with their mysteries, from that period it hath been called in the world Mahabharata (the great Bharata). Being esteemed superior both in substance and gravity of import it is denominated Mahabharata on account of such substance and gravity of import. He that knoweth its meaning is saved from all his sins.

As far as I know, the name Jaya is never actually given in the Mahabharata as the name of the 8800 verses of Sanjaya's dialogue to Dhritarashtra. But the concept of these 8800 verses is mentioned in the same chapter:

Also, the name Bharata, without the Maha, is given to a subset of the Mahabharata consisting of 24,000 verses, as described in the same chapter:

Vyasa executed the compilation of the Bharata, exclusive of the episodes originally in twenty-four thousand verses; and so much only is called by the learned as the Bharata. Afterwards, he composed an epitome in one hundred and fifty verses, consisting of the introduction with the chapter of contents. This he first taught to his son Suka; and afterwards he gave it to others of his disciples who were possessed of the same qualifications. After that he executed another compilation, consisting of six hundred thousand verses. Of those, thirty hundred thousand are known in the world of the Devas; fifteen hundred thousand in the world of the Pitris: fourteen hundred thousand among the Gandharvas, and one hundred thousand in the regions of mankind. Narada recited them to the Devas, Devala to the Pitris, and Suka published them to the Gandharvas, Yakshas, and Rakshasas: and in this world they were recited by Vaisampayana, one of the disciples of Vyasa, a man of just principles and the first among all those acquainted with the Vedas. Know that I, Sauti, have also repeated one hundred thousand verses.

It is the one hundred thousand verses known in the regions of mankind that we call the Mahabharata.

I have the Brihad NArdaiya PurAna. And, it's 1st AdhyAya begins with this Sloka:

The commentator/translator explains in the footnote that the 18 PurAnas+ the RAmAyana + the MahAbhArata are collectively known as "Jaya".

And, the reason they are called so is also given viz- "they are the means of SamsAra Vijaya" i.e means of winning over Samsara or the world. That's why these texts are so-named.

So, IMO, it's not that the original name was Jaya and which was later changed, but Jaya refers to all those aforementioned texts collectively which also include the MahAbhArata.

Janamejaya said, 'O excellent Brahmana, thou hast, indeed, told me, in brief, the history, called Mahabharata, of the great acts of the Kurus. -chapter 62 of Adi Parva: Adivansavatarana Parva of Mahabharata 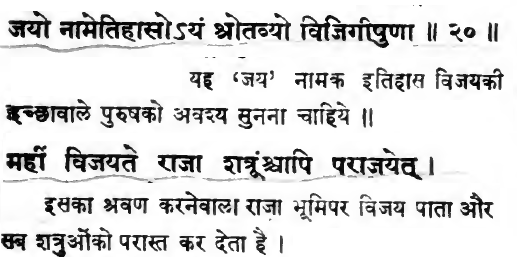 This history is called Jaya. It should be heard by those desirous of victory. -chapter 62 of Adi Parva: Adivansavatarana Parva of Mahabharata

So it was also named as Jaya in the Mahabharata itself.

Not the answer you're looking for? Browse other questions tagged mahabharata name .

1
Jaya evolution to Bharat and then to Mahabharat
14
On what basis are puranas named?
7
Clarification about Kunti's statement on harlot