Was Ramanujacharya aware of His divinity?

Ramanujacharya, the famous Sri Vaishnava acharya, the propounder of the Vishishtadvaita Vedanta philosophy and one of the greatest devotees of Shriman Narayana; is considered to an incarnation of Adi-Shesha by His followers. My question is whether or not was Ramanujacharya aware of His divinity?

Yes, Ramanujacharya did know he was an incarnation. Once 12,000 Jain monks came to debate against Ramanujacharya. He had a curtain placed between him and them, and then from behind the curtain he simultaneously answered all their arguments at once. He did this by turning back into Adiseshan with his thousands of heads. Here is how Alkandavalli Govindacharya, a descendant of one of Ramanujacharya's disciples, describes it in his biography of Ramanujacharya:

The Jainas rose in revolt against Ramanuja. It is said that a body of 12,000 of them marched to Ramanuja, who had taken his abode in Lord Narasimha’s temple at Thondanur, and demanded of him that he should first argue with them on religion and philosophy, before he interfered with their king. Ramanuja seeing this tremendous onslaught of an infuriated crowd, thought to himself thus, “In order to escape from lightning, I have courted thunder; fearing the scorpion, I have fallen a victim to the fangs of a cobra; breaking away from fetters, I have thrust myself into stocks. What is the way now?” Nambi, finding his guru thus embarassed, said, “Holy Sir, you are no ordinary mortal. Is not it needed while at such a crisis to reveal your true celestial nature? May not all men realize your greatness and be saved?” Ramanuja, saying, “Let it be so then,” retired into an ante-chamber in the temple, and commanding a curtain to be hung up between him and the crowd, became a thousand headed serpent, and argued with the Jain disputants in a thousand ways, vanquishing them completely.... Most of them embraced the Vaishnava faith by becoming the disciples of Ramanuja. 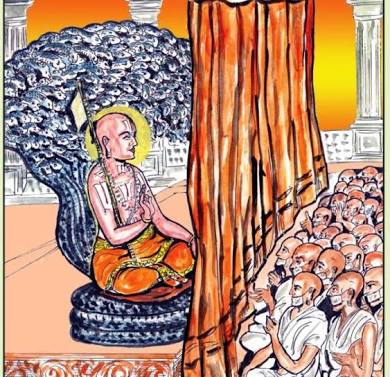 By the way, this incident took place in the Thondanur Yoga Narasimha temple in Karnataka. This was during the time when he had left Sri Rangam due to the persecution of the Shaivite Chola king, which I discuss here.

Not the answer you're looking for? Browse other questions tagged sri-vaishnava ramanujacharya .

11
Why did Sri Ramanuja refuse to hail Shiva? What was the need to prove that Vishnu is the one true God?

10
Are there any surviving quotes from Baudhayana's commentary on the Brahma Sutras?
3
How much does the divinely created statue of Ramanujacharya resemble him?
10
Have any Swaminarayan commentaries on the Brahma Sutras been translated into English?
4
How does the Ramanandi sect originate from the Sri Vaishnava Parampara?
0
Is Jagadguru Ramanandacharya considered an incarnation?
6
What are all the titles conferred to Ramanujacharya?