What is the Life span of Hindu gods

I seen an article at following url it says all god have live span including Vishnu, Shiva and Par Brahm (Akshar Purush)

Is there any evidence in Hindu books that Shiva and Vishnu also go through birth and death?

And is there any supreme in Hinduism who exist forever and create Shiva and Vishnu?

Here are the Sanskrit shlokas and Hindi translation: 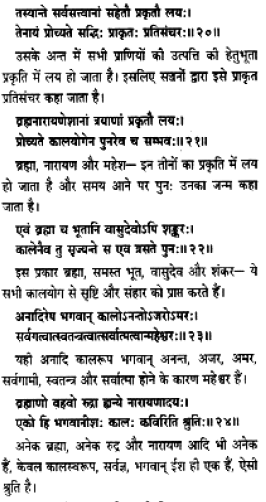 Note: Kala is often used as one of the various names or forms of Yama. But here Kala is another name of Brahman (the Ultimate Reality) and can be related with AdiNarayana, Mahākāla, SadaShiva and AdiShakti as per different sects belief.

Seven Rishis, certain (secondary) divinities, Indra, Manu, and the kings his sons, are created and perish at one period; and the interval, called a Manwantara, is equal to seventy-one times the number of years contained in the four Yugas, with some additional years: this is the duration of the Manu, the (attendant) divinities, and the rest, which is equal to 852.000 divine years, or to 306.720.000 years of mortals, independent of the additional period. ~ Vishnu Purana: Part 1: Chapter 3

Some celestial beings endure for four ages; some for the reign of a Manu: to thee [Dhruva] shall be granted the duration of a Kalpa. Thy mother Suníti, in the orb of a bright star, shall abide near thee for a similar term; ~ Vishnu Purana: Part 1: Chapter 12

What happens to deities at the end of their life cycle?

10
Do our scriptures talk about life span of Tridev?
1
Immortality of Shiva, Brahma and Vishnu
1
What will happen to Indra's wife Shachi and Indra's mother Aditi when Bali takes over the post of Indra in 8th manvantara?
7
Death of Lord Shiva?
7
What does other sects & acharyas believe in Bhagavad Gita 7.19 Sloka except Vasinava Acharayas or Sects?
0
Why Maa Lakshmi says that neither Lord Brahma nor Lord Vishnu only Lord Shiva commands her to move from one place to another.?
3
What is the history of Brahma's birth?
4
What actually is Vishvaroop Darshan?
2
What happens to deities at the end of their life cycle?
2
Who are the parents of Lord Shiva?
See more linked questions