What is the story of Sage Suta?

What his the story of his life? Is he the same as sage, Romaharsana Suta mentioned here?

The wikipedia page on Ugrashravas also mentions that Suta Goswami is Lomaharshana's son.

From that, it looks like, "Suta" is a family name to me.

To glorify King Prithu, the sages performed a sacrifice and from this sacrifice there emerged two races known as the sutas and the magadhas. (Source)

From chapter named Vena and Prithu of Vayu Purana

Two classes of people known as the sutas and the magadhas were born from this yajna. They were actually cross-breeds. The sutas were, the offspring of kshatriya and brahmana parents. (Source)

Looking after horses and acting as charioteers were occupations that were prescribed for sutas. In addition, they sung the glories of kings. The accounts of the Puranas state that sutas were first born when the great king Pirthu organized a yajna. They accordingly became raconteurs of the great deeds of Prithu, and thereafter, of all kings. They also recited the stories of the Puranas. (Source)

And this is what Lomaharshana himself says in Vayu Purana

"I am a suta," replied Lomaharshana. "It is therefore my duty to recite the Puranas. You have asked me to do that which is my duty. I shall gladly accede to your request." (Source)

In the hut, many Brahmins were sitting and listening to Suta's oration. When the Brahmins saw Balarama, they stood up and felicitated him. Only Suta did not stand up. Balarama felt insulted and at once killed him. When Balarama regained his composure after the intoxication receded, he felt guilty for his deed. His belief that killing of Suta would enable him to attain a place in Brahma loka proved to be based on false notion as the Brahmins had shunned him for his deed. After Balarama realised his folly, he began to curse himself and resolved to observe a twelve-year long fast in order to expiate for his sin. Thereafter, Balarama migrated to a place of pilgrimage known as Pratiloma Saraswati to carry out his expiation. (from Expiation of Balarama chapter of Markandeya Purana) 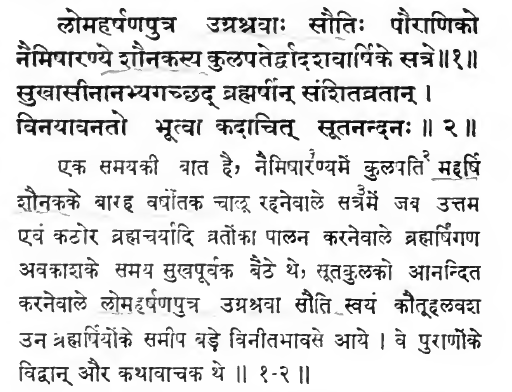 Ugrasrava, the son of Lomaharshana, surnamed Sauti, well-versed in the Puranas, bending with humility, one day approached the great sages of rigid vows, sitting at their ease, who had attended the twelve years' sacrifice of Saunaka, surnamed Kulapati, in the forest of Naimisha. -chapter 01 of Adi Parva of Mahabharata

By the way, it's clear that Romaharshana and Ugrashrava belonged to the Suta mixed-caste. As one of their parent was from Brahmanas so they can be called as Brahmanas too.

Update as asked by Moderator 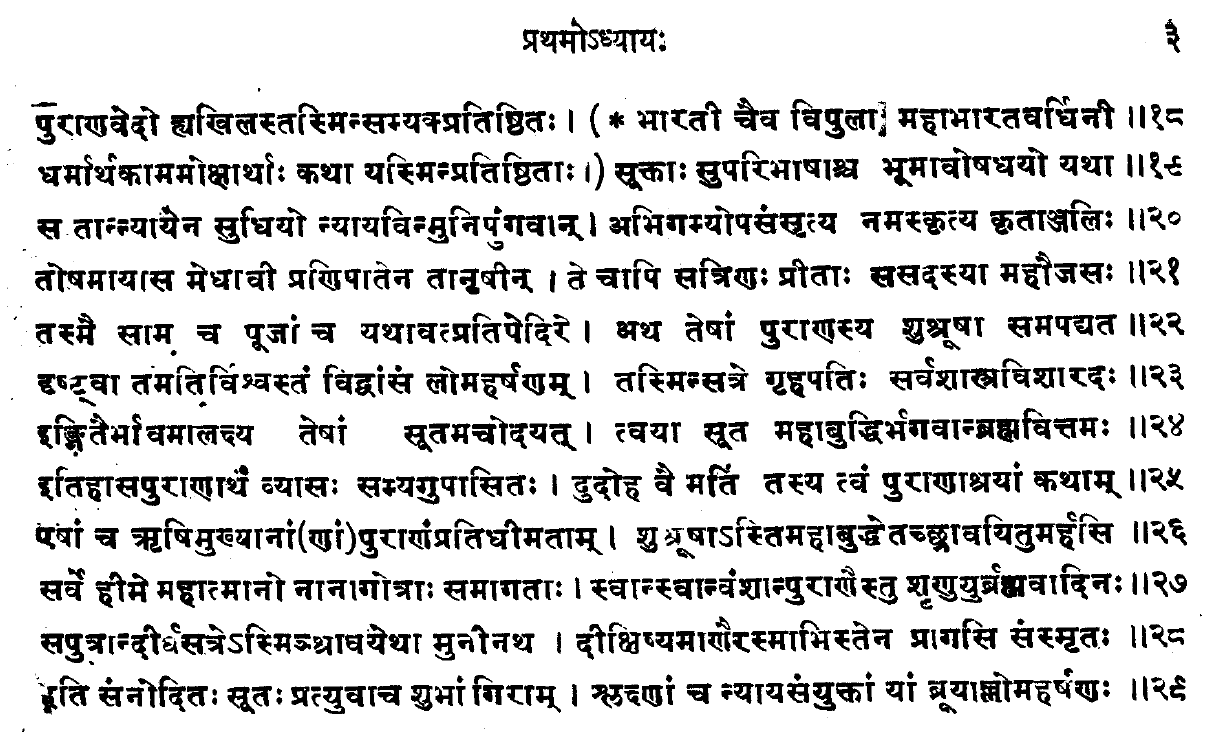 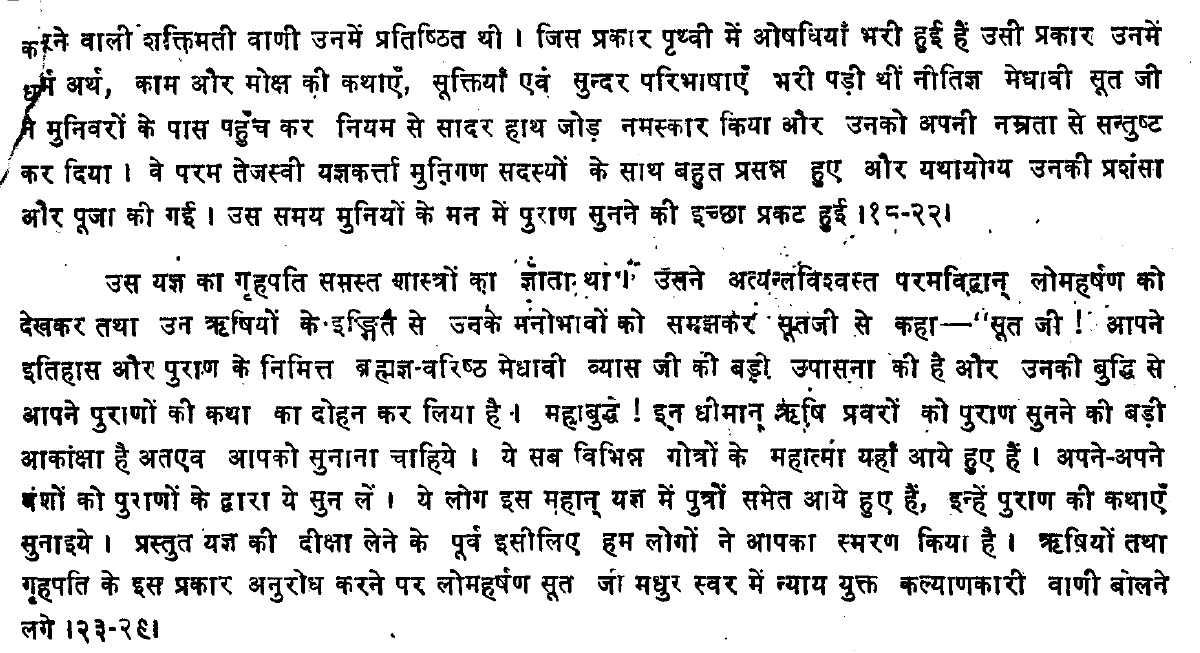 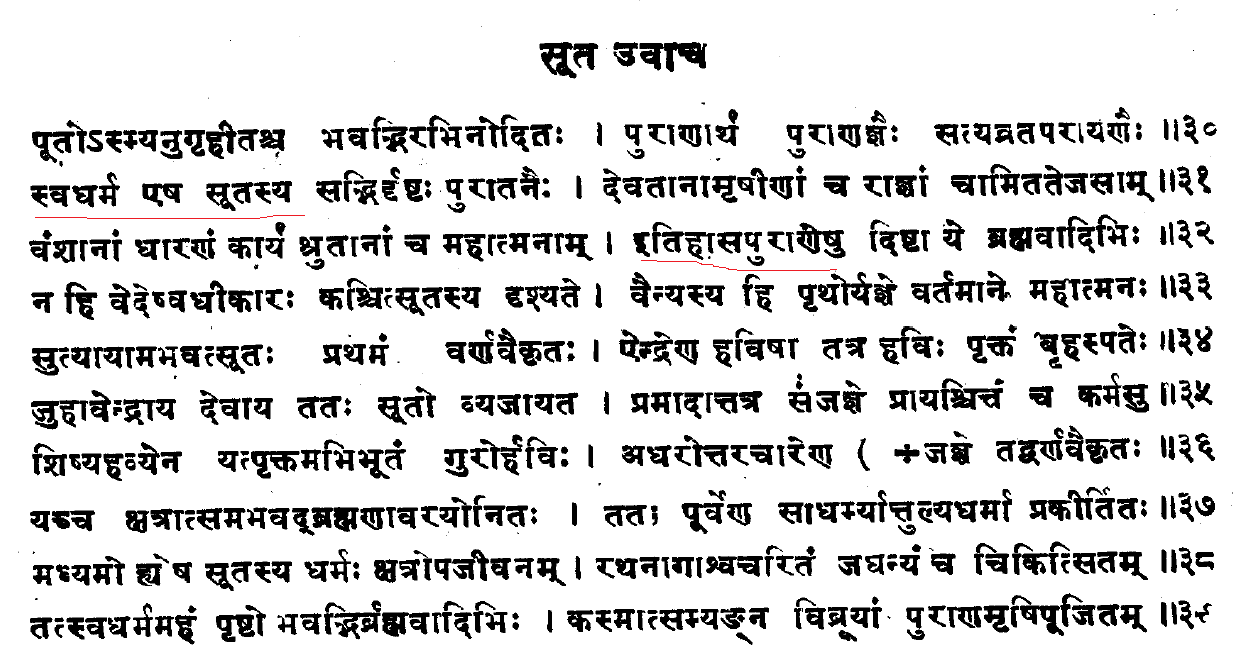 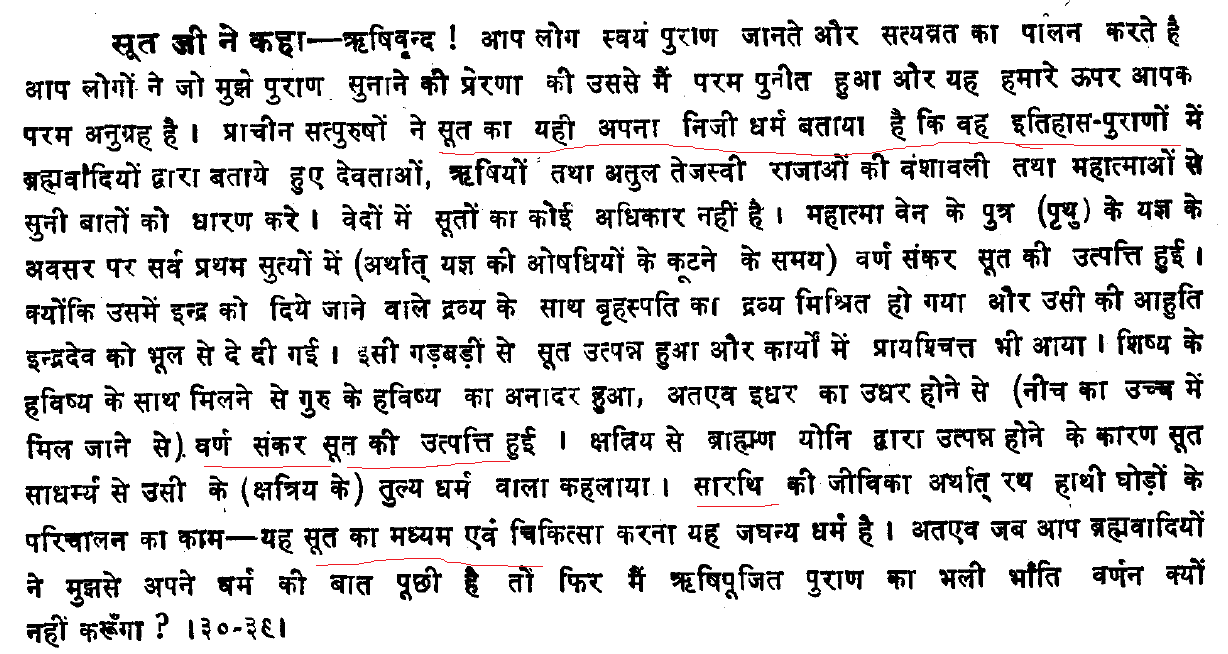 Here is English translation of what Suta (Romaharshana or Lomaharsana) says: 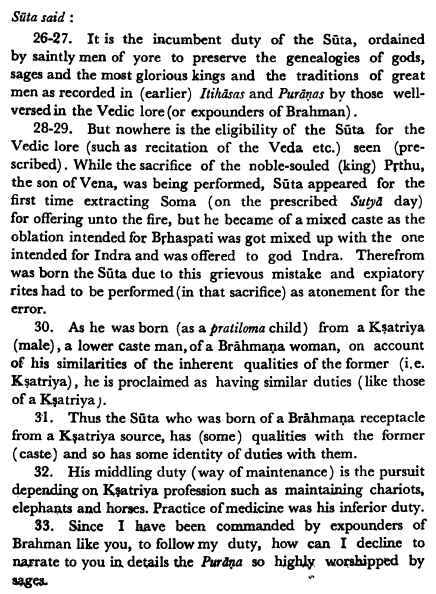 When Lord Baladeva heard that the Pāṇḍavas and Kauravas were about to go to war, in order to remain neutral He left Dvārakā on the pretext of going on pilgrimage. The Lord bathed in sacred places such as Prabhāsa, Tritakūpa and Viśāla, and eventually He came to the holy Naimiṣāraṇya forest, where great sages were performing an extended fire sacrifice. While being worshiped by the assembled sages and offered a seat of honor, the Lord noticed that Romaharṣaṇa Sūta, sitting on the speaker’s seat, had failed to stand in deference to Him. Greatly angered by this offense, Lord Balarāma killed Romaharṣaṇa by touching him with the tip of a blade of kuśa grass. The assembled sages were disturbed by what Lord Baladeva had done, and they said to Him, “You have unknowingly killed a brāhmaṇa. Therefore, even though You are above the Vedic injunctions, we request You to set a perfect example for the general populace by atoning for this sin.” Then Śrī Baladeva, following the Vedic maxim that “one’s son takes birth as one’s own self,” granted to Romaharṣaṇa’s son Ugraśravā the position of speaker of the Purāṇas, and in accordance with the sages’ desires He promised Ugraśravā a long life with unfailing sensory capacity.

By the way, this should disprove the misconception that Romaharshana and Ugrashrava belonged to the Suta mixed-caste; as the passage says they were Brahmanas. They're just called Suta because Suta is also the Sanskrit word for storyteller. In any case, Romaharshana was the shishya of Vyasa, as described in this of the Vishnu Purana:

When Vyása was enjoined by Brahmá to arrange the Vedas in different books, he took four persons, well read in those works, as his disciples. He appointed Paila reader of the Rich; Vaiśampáyana of the Yajush; and Jaimini of the Sáma-veda: and Sumantu, who was conversant with the Atharva-veda, was also the disciple of the learned Vyása. He also took Súta, who was named Lomaharshańa, as his pupil in historical and legendary traditions.

And then Ugrashrava learned the Mahabharata and Puranas from his father and from Vyasa's shishya Vaishampaya, as described in this chapter of the Adi Parva of the Mahabharata:

Saunaka said, 'Child, thy father formerly read the whole of the Puranas, O son of Lomaharshana, and the Bharata with Krishna-Dwaipayana. Hast thou also made them thy study? In those ancient records are chronicled interesting stories and the history of the first generations of the wise men, all of which we heard being rehearsed by thy sire. In the first place, I am desirous of hearing the history of the race of Bhrigu. Recount thou that history, we shall attentively listen to thee.' Sauti answered, 'By me hath been acquired all that was formerly studied by the high-souled Brahmanas including Vaisampayana and repeated by them; by me hath been acquired all that had been studied by my father.

In fact, Ugrashrava was personally present when Vaishampayana narrated the Mahabharata to Arjuna's great-grandson Janamejaya, at the very beginning of the Adi Parva of the Mahabharata says:

Ugrasrava, the son of Lomaharshana, surnamed Sauti, well-versed in the Puranas, bending with humility, one day approached the great sages of rigid vows, sitting at their ease, who had attended the twelve years' sacrifice of Saunaka, surnamed Kulapati, in the forest of Naimisha. Those ascetics, wishing to hear his wonderful narrations, presently began to address him who had thus arrived at that recluse abode of the inhabitants of the forest of Naimisha. Having been entertained with due respect by those holy men, he saluted those Munis (sages) with joined palms, even all of them, and inquired about the progress of their asceticism. Then all the ascetics being again seated, the son of Lomaharshana humbly occupied the seat that was assigned to him. Seeing that he was comfortably seated, and recovered from fatigue, one of the Rishis beginning the conversation, asked him, 'Whence comest thou, O lotus-eyed Sauti, and where hast thou spent the time? Tell me, who ask thee, in detail.' Accomplished in speech, Sauti, thus questioned, gave in the midst of that big assemblage of contemplative Munis a full and proper answer in words consonant with their mode of life. Sauti said, 'Having heard the diverse sacred and wonderful stories which were composed in his Mahabharata by Krishna-Dwaipayana, and which were recited in full by Vaisampayana at the Snake-sacrifice of the high-souled royal sage Janamejaya and in the presence also of that chief of Princes, the son of Parikshit, and having wandered about, visiting many sacred waters and holy shrines, I journeyed to the country venerated by the Dwijas (twice-born) and called Samantapanchaka where formerly was fought the battle between the children of Kuru and Pandu, and all the chiefs of the land ranged on either side. Thence, anxious to see you, I am come into your presence. Ye reverend sages, all of whom are to me as Brahma; ye greatly blessed who shine in this place of sacrifice with the splendour of the solar fire: ye who have concluded the silent meditations and have fed the holy fire; and yet who are sitting--without care, what, O ye Dwijas (twice-born), shall I repeat, shall I recount the sacred stories collected in the Puranas containing precepts of religious duty and of worldly profit, or the acts of illustrious saints and sovereigns of mankind?"

On a side note, this chapter of the Anushasana Parva should make clear that Ugrashrava, Lomaharshana, and Lomasa are three different individuals:

After this recital of the deities, I shall name those learned Brahmanas crowned with ascetic merit and success and capable of cleaning one of every sin. They are Yavakrita and Raibhya and Kakshivat and Aushija, and Bhrigu and Angiras and Kanwa, and the puissant Medhatithi, and Varhi possessed of every accomplishment. These all belong to the eastern region. Others, viz., Unmuchu, Pramuchu, all highly blessed, Swastyatreya of great energy, Agastya of great prowess, the son of Mitra and Varuna; Dridhayu and Urdhavahu, those two foremost and celebrated of Rishis,--these live in the southern region. Listen now to me as I name those Rishis that dwell in the western region. They are Ushango with his uterine brothers, Parivyadha of great energy, Dirghatamas, Gautama, Kasyapa, Ekata, Dwita, Trita, the righteous-souled son of Atri (viz., Durvasa), and puissant Saraswat. Listen now to me as I name those Rishis that worship the deities in sacrifices, dwelling in the northern region. They are Atri, Vasishtha, Saktri, Parasara's son Vyasa of great energy; Viswamitra, Bharadwaja, Jamadagni, the son of Richika, Rama, Auddalaka, Swetaketu, Kohala, Vipula, Devala, Devasarman, Dhaumya, Hastikasyapa, Lomasa, Nachiketa, Lomaharsana, Ugrasravas, and Bhrigu's son Chyavana.

10
Does Balarama ever regret killing Romaharshana?
4
Naimisharanya in Puranas
7
Who was sage Lomasa?
6
What is the story of Sage Shaunaka?