How do you know death is near for a person as per scriptures? Is there any reference?

I have seen an old man suffering for long where as healthy young man died. So is there any mention in scriptures or any indication of a man dying? I have googled around and found few answers which contradict any scripture. Where can I refer?

Some signs, which foretell that death is nearing, are given in this Linga PurAna chapter:

Suta Maha Muni indicated certain premonitions of untoward tidings and of death when human beings ought to intensify virtuous deeds as the last breathing might arrive. The visions of Arundhati, Dhruva and the Celestial routes would mean that a person concerned might not last more than a year. Vision of Surya without rays and Agni with rays might indicate an eleven month end ahead; Mutra and Pureesha as gold and silver indicates that the end might approach within ten months; seeing a Golden Tree, or visit of a Gandharva Nagari or visions of Preta-Piscachas might allow a further life of nine months more; dream of a very huge monster or a skeletal figure could forewarn an eight month ahead; image of dust storm or muddy rain could indicate the end within seven months; a dream of a crow, or a kite or dove or any other meat-eating bird on a person’s head might presume death within six months; Straight lined crows flying on the sky could indicate death within the next four five months; thunders on a cloudless and clear sky or rainbow seen in a water body or a distorted image of one’s own self that the end might be within a couple of months; death is stated to be destined within a month when the person concerned would vision the self without head; an experience of the smell of a dead body or of unbearably rotten food could imagine that death might be withi some twenty five days; monkey dance while riding a chariot towards South might sign-post already; a black robed woman leading a person towards South, vision of a headless body , a naked Sanyasi dancing, red face and yellow cheeks are signs of death.

The following part is added by user Tamas. So, credit goes to him.

On connecting on shadow also one can predict according to Swara yoga. See the pic. 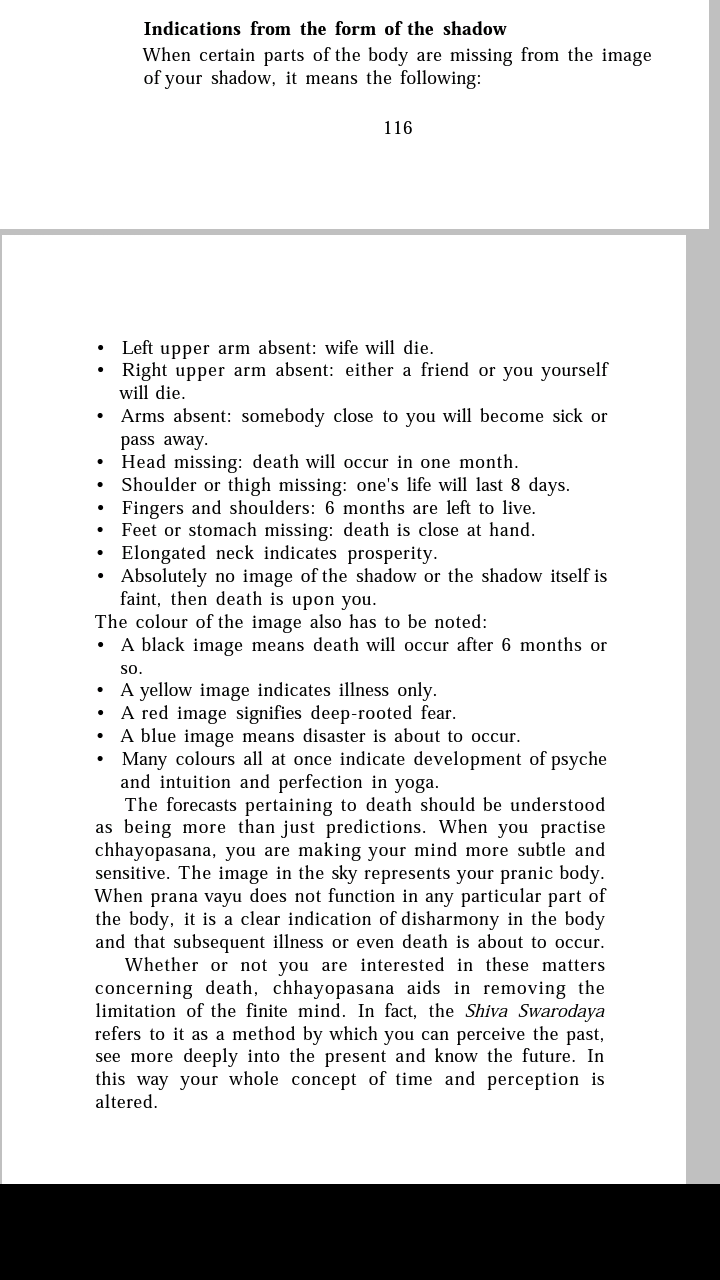 Some signs, which foretell that death is nearing, are given in

The English Translation is given

The effects of these symptoms can be minimized:

Not the answer you're looking for? Browse other questions tagged scripture death omens .

7
Is it a bad omen to see snakes chasing you in dreams?
5
Where do the Vedas describe dreaming of a black-skinned man?
8
Is there any significance of flying Eagle touching head?
5
What does a Dove symbolize?

22
How old is earth according to Hinduism?
6
Do Scriptures confirm about the "Swayambhu" nature of Shalagramas and Banalingas?
10
What do Scriptures tells us about Kundalini?
4
How many husbands are permitted to a woman (polyandry) in ancient history?
6
Guidance about visiting temples after a 13th day of death of any family member