We all know that lord Hanuman is very powerful and he was friend of Sugriva, then why didn't he help Sugriva to get his throne back from his brother Vali (by killing vali)?

I know Vali was with boon that he will take 50% of power from his opponent who ever challenges him but I am sure this is not the reason behind lord Hanuman not fighting with Vali.

Be Happy is right in answering this.

Shri Hanuman ji was certainly more powerful than Vali as well as Ravana. This fact is supported here, go through 35th and 36th sarga for details in Valmiki Ramayana.

The text in image translates as (this is my translation, not the literal one): 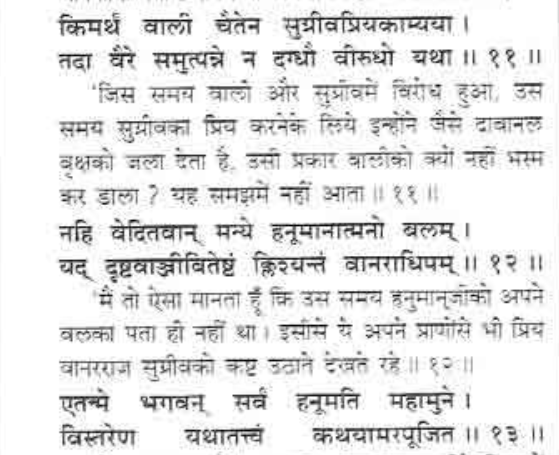 The text in above image translates as (again my translation):

Shri Rama: When Vali and Sugriv became enemy of each other; then as forest fire destroys trees, why did Hanuman not destroy Vali in the same way? This is difficult to understand. I believe that Hanuman did not remember his strength at that time. That is why, he was left just to see his beloved Sugriv suffering in such a situation. 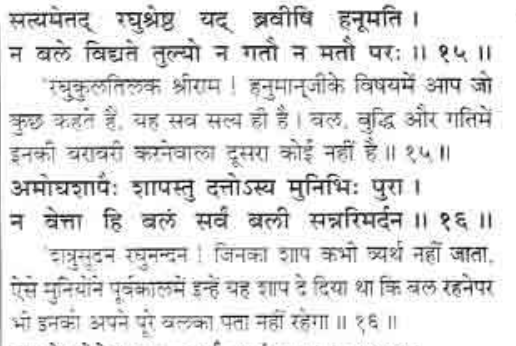 Shri Agastya Rishi: O' Shri Rama! Whatever you say about Hanuman is all true. There is no match to Hanuman in strength, intelligence and speed. O' destroyer of enemy, Shri Rama! Sages, whose curses are never vague, had cursed Hanuman that despite having the strength; he would be forgetful of the same.

The link is about conversation between Rishi Agastya ji and Shri Rama in Uttar Kand.

Actually as per hindusim everything that happens is the will of Lord Vishnu.

When Rama killed Valli, he was behind 7 trees, which were considered as 7 saints cursed.

So Rama's arrow also freed those saints from curse and also killed Vali.

Vali's death was written by Rama's hand and hanuman knew that. Actually Rama sent Hanuman to save Sugriva not to kill Valli.

So we can see it as leela of Lord Vishnu. Because untill a person like Vaali does not do sin like harrasing younger brother's wife and throwing younger brother out of kingdom and finally beating him hard to kill him, no god kills anybody. so valli was supposed to do sins. Because of Valli's fate Hanuman did not kill him.

Another fact is Vaali was a king and Hanuman was not a king. According to Hindusim only a king can challenge or kill a king.

Räma said: It is due to the might of the arms of this Hanumän, that I was able to get back Sitä, Lakshmana, victory, kingdom, friends and kinsmen. How could anyone except this great monkey find out the detailed news ofJänaki? Even this friend of mine, the Lord of the monkeys (i.e. Sugriva), would not have been able to know the news about Jänaki. When the enmity (of the brothers) started (I wonder) why Väli was not reduced to ash like grass by this Hanumän with a desire to do something pleasing to Sugriva? When the Lord of the monkeys was suffering torture, why was he neglected? I think Hanumän did not realize his own strength.

When the infant fell down almost dead due to the blow received from the thunderbolt, Väyu (Wind God) carried him on to Mahäkälavana. For the sake of his son, Pavana (Wind) propitiated the Linga then. As soon as he came into contact with the Linga, the monkey rose up like a drying plant after being watered. He was fully restored to life, After seeing him revived, Pavana was excessively delighted in his heart. He took up the child quickly and said: 'My son rose up due to the contact with this Linga. Hence this deity will become well-known as Hanumatkeévara.'

In the meantime Sakra came there surrounded by the Suras, holding a garland of blue lotuses. He said: 'Since his jaw was shattered by the thunderbolt hurled with my hand, this powerful monkey will be called Hanumän. Varuna granted him this boon: 'He will never meet with death. Yama granted him immunity from death due to a blow with (his) stick. Dhanada granted him freedom from illness. Lustre was granted by Sürya. Speedy movement was granted by Pavana, Then the following boon was granted by the Linga in the presence of the Devas: 'He will not be killed by any of the weapons, Undoubtedly he will become unaging and immortal, He will be a terror to the enemy. He will grant freedom from fear to his friends. He will be invincible in battle.

This the Linga said repeatedly: 'In order to exterminate the army of the enemy and to get the favour of Räma always, he will not forget his strength but due to the curse he will not remember it for some time.

Vali was king of the Vanaras. Moreover, the dispute was only between the two brothers Vali and Sugriva. So it was not right for third person to interfere in their business. But because Rama was a descendant in the Ikshvaku lineage, to whom the whole land, forests, mountains, etc. belonged [VR - 4.18.6], Rama had the right to punish him by law, but not Hanumana.

Another possible cause lies in an earlier question you asked. It was may be because, Hanuman didn't remember all his powers. And without knowing all his powers, he couldn't have defeated such a strong personality like Vali (given he also had that special boon of taking half of his opponents power). Even Sugriva took a test of Rama's power to be sure that He can defeat Vali. Hanuman, remembered all his power when Jambvan reminded him at the shore of the sea for flying over to Lanka. By that time Vali was already dead.

Be HappyBe Happy
25.6k22 gold badges6767 silver badges127127 bronze badges
1
Add a comment  |
1
Want to improve this post? Add citations from reputable sources by editing the post. Posts with unsourced content may be edited or deleted.

People, this is not even a debate. Are we really discussing whether a child, who mistook the Sun as a fruit and went on grab and eat it, is all powerful or not?

Vali, Ravan or anyone except the almighty himself are no match for him. It is theoretically impossible to defeat Hanuman. He is one of five immortals, so simply no one can kill him. He has a boon from Brahma that no one can kill him with any weapon in war. His body is tougher than Vajra (the toughest material in the world, better than Adamantium I can assure you. :) ). He is faster than wind, water can't drown him (courtesy of Varundev), fire can't burn him (courtesy of Agnidev), he can shapeshift (courtesy of Suryadev) and he is a nishkam yogi so women cannot manipulate him. (This was actually the reason why Vali and Ravana were punished in the first place.)

One of the reasons why Hanuman didn't kill Vali is because only Ikshwaku descendants, who were the rulers of the region, had the rights to punish Vali for his misdeeds. Hanuman wouldn't disobey Ram. After all, he is an ideal devotee and "das" of Rama which is his topmost power \ weapon. Rama wouldn't let any harm come to his Hanuman.

Those who need a reference, here it is. We all know this to be true.

No where in Srimad Ramayana it was mentioned that Vali had a boon that he will take 50% of power from his opponent, who ever challenges him. However, it was mentioned in Ramayana that he is very powerful and fearless.

According to Srimad Valmiki Ramayana, Vali had always been wearing a lustrous necklace, given by his father Lord Indra, on his neck. It was only when he is breathing his last that he asks Sugreeva to take it before he passes away.

Sri Hanuma shows immense strength and dexterity in SUNDARA KANDA. He even says that he alone can slay Ravana alongwith his army. Even Ravana acknowledges Sri Hanuma’s capabilities in Sundara Kanda (Sarga 46 Sloka 11 ).

"Earlier, I saw the Vanara-s of a great prowess like Vali and Sugreeva, the mighty Jambavan, Nila the Chief of army and so on like Dvivida.”

He could have, I think. From the various situations in which Sri Hanuma’s character was depicted, I think, Sage Valmiki projected him to be a KARMA YOGI and STHITA PRAGNA.

Being a wise person he knows that if he defeats Vali and hands over the Kingdom to Sugreeva, the latter may not like to take it as till then Sri Hanuma had been his minister only.

A kingly person will not accept such a gift from a minister, as it will be viewed below his dignity. That is why Sri Hanuma remained silent and keeps on following Sugreeva.

However, accepting help from another king/would be king is a different matter. It is common among kings.

Hence, Sri Hanuma gladly accepted the proposal of Lakshmana to arrange a meeting with Sugreeva, understanding that Sri Rama can slay Vali.

Not the answer you're looking for? Browse other questions tagged ramayana hanuman vali .

14
Why did Lord Hanuman forget that he has special powers?
8
Who was the father of Vali?
9
What will happen if two people fight Vali together?
6
When did lord Hanuman fight with Ravana?
1
Hanuman forgeting divine powers

24
Why did Lord Rama strike from behind to kill Vaali?
8
Why did Lord Rama give a second chance to Ravana, but not to Vali?
9
What will happen if two people fight Vali together?
24
Who made Lord Hanuman immortal?
10
How come Lord Hanuman was able to resize his body?
8
Who was the father of Vali?
6
When did lord Hanuman fight with Ravana?
17
Why Hanuman became staunch devotee of Lord Rama?