How many ekadashi are there in a year?

How many Ekadashi are there in a year?

How many days after one another Ekadashi comes? and why?

Does each one different from each other? why is it different?

Does the sequence of Ekadashi remain same for each year? Why do they come in the same sequence?

Is there any Ekadashi, which is most important hence most people follow it?

How many Ekadashi are there in a year?

Not only Ekadashi but also all tithis (other than Purnima (full moon day) and Amavasya (no moon day) which occur only once in a month) come twice in a month i.e one in Krishna Paksha and one in Shukla Paksha. Also, There is a concept of Adhika Maasa (extra month) which occurs about every 32.5 months to keep the lunar (a lunar year contains only 354.36 days) and solar calendars aligned.

So there are 24 Ekadashi fasting days in a normal year

There are 2 extra Ekadahsis in Adhika Maasa. Hence, there would be 26 Ekadashi fasting days in a year which has Adhika Masa:

How many days after one another Ekadashi comes? and why?

Generally 15 days but not necessarily. As mentioned above Ekadashi re-occurs after 15 tithis but there is no fixed duration for a tithi.

Does each one different from each other? why is it different?

Each one is associated with some story of Lord Vishnu. For example, DevShayani Ekadashi and DevUthani Ekadashi are completely different.

Padma Purana: Uttara-Khanda has a dedicated chapter on each Ekadashi: 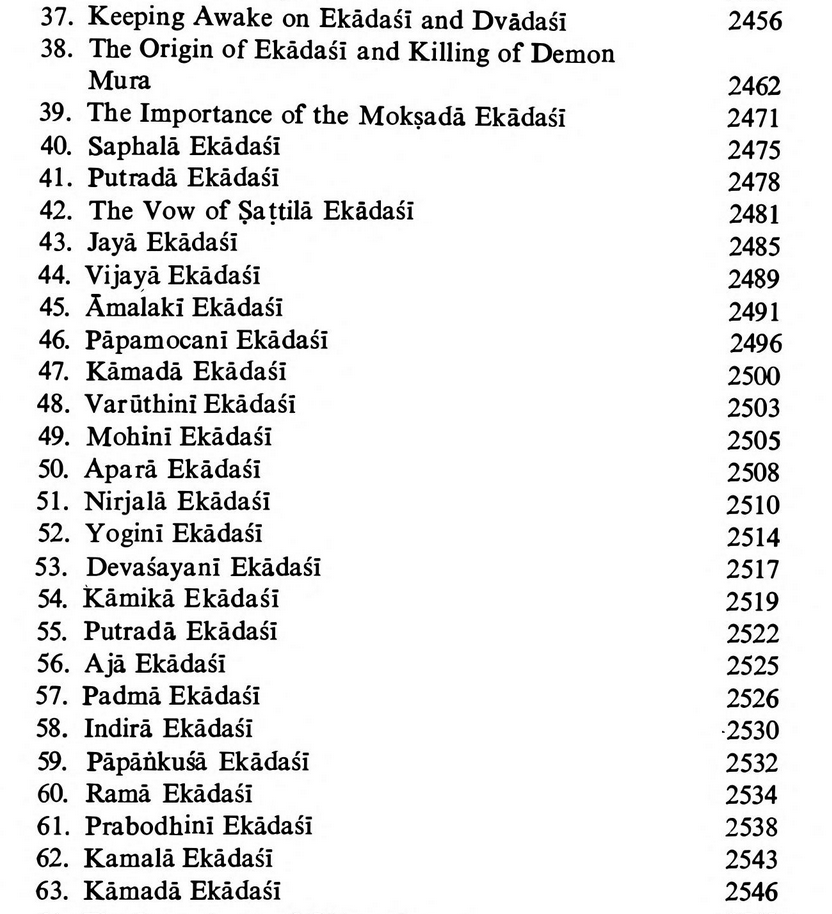 Does the sequence of Ekadashi remain same for each year? Why do they come in the same sequence?

Like we have Jan, Feb... similarly we have Chaitra, Vaisakha...

So the sequence remains the same.

Is there any Ekadashi, which is most important hence most people follow it?

This depends on opinion, belief and geographical location. In Narada Purana:

Sanatkumar says: "O Narada! A fast on Ekadashi (eleventh day) in both the phases of a month pleases Sri Hari and fulfills all the desires".

As per PADMA-PURANA : UTTARAKHANDA : Chapter 51. Nirjala Ekadasi, sage Vyasa advised Bhima to observe single Nirjala Ekadasi fasting to compensate for not observing all Ekadashi fasting in a year. More details in Why Nirjala Ekadashi is also known as Bhima Ekadashi? post.

Difference between Purnimanta and Amanta

How many Ekadashi are there in a year? Answer-24 in a normal year, Plus in every 4 years with extra month called Adhi Mas has 2 more ekadashi, so total Ekadashi are 26

How many days after one another Ekadashi comes? and why? Answer- Usually 15 day. Ekadashi is 11th day of Hindu lunar month and it has 2 pakshas of 15 days each containing one ekadashi(11th day).

Does each one different from each other? why is it different? Answer- Each is different as each is capable of granting different kind of results on fasting & there is separate story associated with everyone.

Does the sequence of Ekadashi remain same for each year? Why do they come in the same sequence? Answer-Explaiend above as Ekadashi is 11th day of Hindu lunar month so each one will have same sequence every year except Adhi mas where 2 more ekadashi are added every 4th year.

Is there any Ekadashi, which is most important hence most people follow it? Answer- There is one called Nirajala Ekadashi, This is said to be as capabel to give results of all 24 ekadashis of the year.

Not the answer you're looking for? Browse other questions tagged identification-request name ekadashi .

6
Why Nirjala Ekadashi is also known as Bhima Ekadashi?

10
What is the importance of Ekadashi?
5
Does Dirghatamas ever call Vishnu Keshava in the Vedas?
2
Why people are named after Shantanu?
6
How to identify the shannavathi (96) days of an year for tharpanam?
8
Do any scriptures describe fish to be vegetarian/Sattvic?
7
Was Laxman Kumara named after Lakshmana?
7
how many different names of Karna are mentioned in Mahabharata?
6
How Ekadashi is performed in Shiva Temples?
3
Why do Smarthas and Vaishnavas have differences regarding dates (tithi) of festivals like Ekadashi?