Where Epics and Puranas are mentioned as 5th Veda?

There are 4 vedas - Rigveda, Yajurveda, Samaveda and Atharvaveda.

But in several places few scriptures are mentioned as 5th Veda, such as: 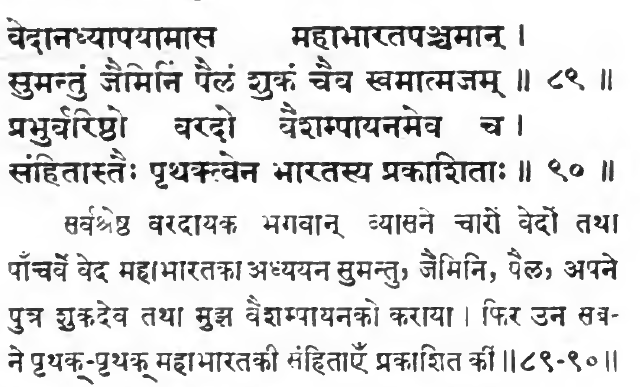 The boon-giving great one then taught Sumanta, Jaimini, Paila, his son Suka, and Vaisampayana, the Vedas having the Mahabharata for their fifth. -Adi Parva: Adivansavatarana Parva of Mahabharata

The four divisions of the original sources of knowledge [the Vedas] were made separately. But the historical facts and authentic stories mentioned in the Purāṇas are called the fifth Veda. -SB 1.4.20

Yes, there is. First of all, the Bhagavatam is one of them, in fact the very Bhagavatam verse you quoted:

It's just a translation issue; the verse is actually saying that Itihasas (epics) and Puranas together constitute the fifth Veda.

In any case, another chapter of the Sriman Bhagavatam provides more detail on this:

Beginning from the front face of Brahmā, gradually the four Vedas — Ṛk, Yajur, Sāma and Atharva — became manifest. Thereafter, Vedic hymns which had not been pronounced before, priestly rituals, the subject matters of the recitation, and transcendental activities were all established, one after another. He also created the medical science, military art, musical art and architectural science, all from the Vedas. They all emanated one after another, beginning from the front face. Then he created the fifth Veda — the Purāṇas and the histories — from all his mouths, since he could see all the past, present and future.

This chapter of the Chandogya Upanishad also says that Itihasas and Puranas are the fifth Veda:

In many sruti scriptures it is mentioned that puranas and Itihasa are fifth Veda.

"As clouds of smoke proceed by themselves out of a lighted fire kindled with damp fuel, thus, verily, O Maitreyî, has been breathed forth from this great Being what we have as Rig-veda, Yagur-veda, Sama-veda, Atharvâṅgirasas, Itihâsa (legends), Purâna (cosmogonies), Vidyâ (knowledge), the Upanishads, Slokas (verses), Sûtras (prose rules), Anuvyâkhyânas (glosses), Vyâkhyânas (commentaries). From him alone all these were breathed forth. - "Bṛhad-āraṇyaka Upaniṣad 2.4.10.

"In this way all the Vedas are manifested along with the kalpas,rahasyas, Brahmanas, Upanishads, Itihas, anvakhyatas and the puranas." - Gopatha Brahman purva 2:10.

Not the answer you're looking for? Browse other questions tagged vedas mahabharata puranas ramayana .

5
Where in Vedas it is written that Vedas are incomplete without Ithihas and Puranas?
5
Why Indra is not worshiped in general regular worship?

10
Feminist's claim that the Vedas, Ramayana and Mahabharata were written by male writers
7
Does Veda has more than one Samhita regarding to Shakha?
5
Where in Vedas it is written that Vedas are incomplete without Ithihas and Puranas?
4
How does ramayana mention atharva veda and brahma priest?
6
Are the upanishads later to the Vedas?
7
Are Itihasa and puranas superior than Vedas?
5
How to reconcile mention of word Taittiriya in Ramayana?
3
Mahabharata total verses