Clarification about Kunti's statement on harlot

This answer says that

As per Adi Parva: Sambhava Parva of Mahabharata:

The celebrated Pandu, tempted by the desire of having more children wished to speak again unto his wedded wife (for invoking some other god).

But Kunti addressed him, saying,

'The wise do not sanction a fourth delivery even in a season of distress. The woman having intercourse with four different men is called a Swairini (heanton), while she having intercourse with five becometh a harlot. Therefore, O learned one, as thou art well-acquainted with the scripture on this subject, why dost thou, beguiled by desire of offspring, tell me so in seeming forgetfulness of the ordinance?'" 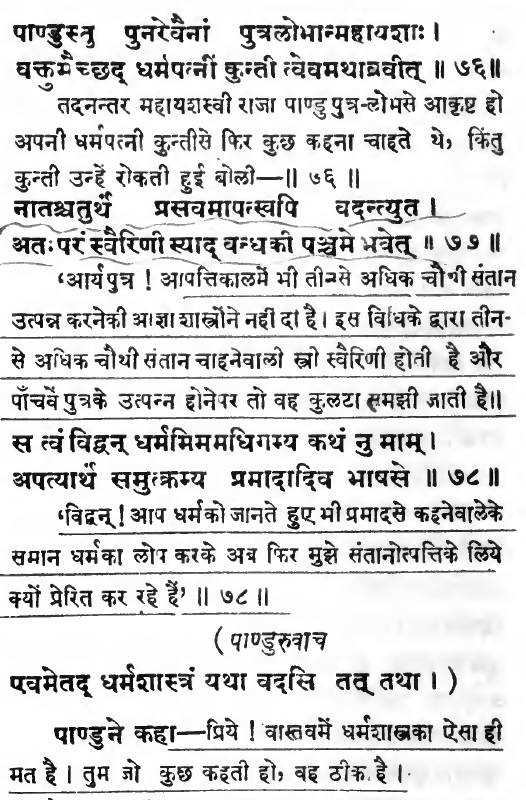 Note: In this Hindi translation, it seems that Kunti is referring about having sons from different men as words "is vidhi ke dvara" are used. Also, there seems no limit of having only three or four sons as per scriptures. Many women had more than three/four sons. For example, Rukmini had more than 3/4 sons: Pradyumna, Charudeshna, Sudesna, Charudeha, Sucharu, Charugupta, Bhadracharu, Charuchandra, Vicharu and Charu.

But the count was already five :

I think no reference is needed for last three because Kunti must have referred them. Also, Pandu was cursed later, so he must have been in the list of four men whom Kunti referred else he must have given the reason to Kunti about his request of producing more children from other gods.

And here is the reference for Surya:

The god Vivaswat (Sun) approaching her, said, 'Here I am, O black-eyed girl! Tell me what I am to do for thee.'

"Hearing this, Kunti said, 'O slayer of foes, a certain Brahamana gave me this formula of invocation as a boon, and, O lord, I have summoned thee only to test its efficacy. For this offence I bow to thee. A woman, whatever be her offence, always deserveth pardon.'

Surya (Sun) replied, 'I know that Durvasa hath granted this boon. But cast off thy fears, timid maiden, and grant me thy embraces. Amiable one, my approach cannot be futile; it must bear fruit. Thou hast summoned me, and if it be for nothing, it shall certainly be regarded as thy transgression.'

"Vaisampayana continued, 'Vivaswat thus spoke unto her many things with a view to allay her fears, but, O Bharata, the amiable maiden, from modesty and fear of her relatives, consented not to grant his request.

And, O bull of Bharata's race, Arka addressed her again and said, 'O princess, for my sake, it shall not be sinful for thee to grant my wish.' Thus speaking unto the daughter of Kuntibhoja, the illustrious Tapana--the illuminator of the universe--gratified his wish. And of this connection there was immediately born a son known all over the world as Karna accountred with natural armour and with face brightened by ear-rings. -Adi Parva: Sambhava Parva of Mahabharata

Then why didn't Kunti say this statement before Arjuna's birth?

One possible reason that seems logical is:

And after the birth of this child (Karna), the illustrious Tapana (Surya) granted unto Pritha (birth name of Kunti) her maidenhood and ascended to heaven. -Adi Parva: Sambhava Parva of Mahabharata

This seems logical because this was the very reason which proved Karna's statement on Draupadi false and made him villain as Draupadi was blessed to gain her virginity.

Is there any other reason for which Kunti didn't include Surya?

Or as mentioned in this comment of Keshav Srinivasan "I think it's posssible Pandu never had intercourse, and that she only had intercourse with Surya, Yama, Indra, and Vayu."

Is it true that Pandu never had intercourse with Kunti? If so, was Pandu aware of that Karna was son of Kunti and Surya?

It refers to giving birth and not about having intercourse. Secondly, she is referring to the Niyoga padati. So, that way its only 3. We can't consider Surya here, since he had granted a boon to her that her virginity (Kanyatva) will not change. You can find it in Vyasa Mahabaratha - Chapter 111 - Verse 20 - MN Dutt Translation

The greatly effulgent Tapana, then giving Pritha her maiden-hood, again went to heaven.

In that case it would only be Yama, Vayu and Indra.

We have to remember some of the main issues here.

Not the answer you're looking for? Browse other questions tagged mahabharata .

9
How the original name of "Jai Samhita" changed to "Mahabharat"?
4
How many husbands are permitted to a woman (polyandry) in ancient history?
5
Why Dhritarastra is not called Vyasa's son?
3
Was Kunti right to beget a child from both father(Surya) and son(Yama)?
2
Which of the main characters in the Mahabharata lie for definite, other than Kunti?

9
Which scripture say any woman having intercourse with 5 different men is a prostitute?
6
What is the story of the Naga Padmanabha dragging the chariot of Surya?
8
Did Kunti explicitly tell Pandavas to marry Draupadi?
1
Age swapping between humans
1
Priority of sons told by Pandu
3
Was Kunti right to beget a child from both father(Surya) and son(Yama)?