What is the correct procedure to chant Narasimha 32 letters maha mantra?

The correct Narasimha maha mantra with 32 letters is:

Please note that a screenshot from Nrisimha Tapani Upanishad 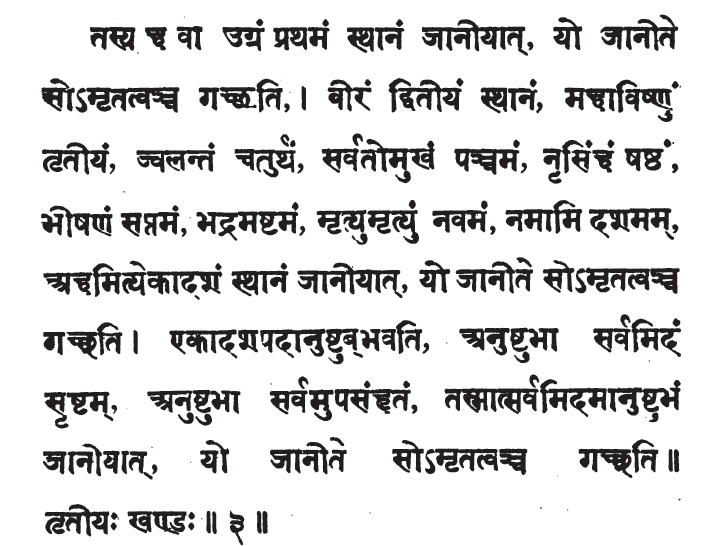 which acts as a proof that above mantra is correct. But the thing which I don't know this is the correct procedure of chanting this mantra. Also find the youtube link which shows chanting of above mantra by Shri Mukkur swamy and also a group of slokas where all the 32 letters are put one by one.

I am writing the answer as i have promised to do so to you in the chat room. But i think you'll be disappointed overall.

My answer is based on the Tantrasara. I have the 7th edition of the book.

[ If you want to know about the book or it's author Sri Krishnanada Agamvagis, then see this page. The author was an adept in Vedas and Tantras and he lived about 500 years ago in Bengal's Navadwip town. He traveled all over India and compiled his Tantrasara. It is the possibly the largest compendium work done on Tantras and Agamas. It is completely in Sanskrit, much later it was translated into Bengali by Rasikmohana Chattopaddhyaya. If you see this answer then Sir John Woodruffe is citing it, my answer there also citing from it. The book quotes from hundreds of Tantric and Agamic scriptures, some of which are not available at present as whole texts. Other works of this genre are the PrAnatoshini, SAradatilakam etc but TantrasAra is much more extensive and voluminous]

Because, the procedure is supposedly found in a Vaishnava Agama, so it is not advisable for anyone to chant this Mantra without initiation.

Moreover, the full procedures that are involved will appear to you as cumbersome, if you do not already know about how to perform NyAsas and other stuffs.

Anyways, first of all the correct Mantra in full is this:

So, the devotee should chant this and not the one which is found in the image in your question.

I have divided the answer into points (quoting from TantrasAra's pp 269):

All Mantras have limbs or Angas like DevatA, Chandah, Rishih etc. If someone chants a Mantra without having the knowledge of these limbs, then such a chanting is considered as Anga-HinA or devoid of limbs. Such chanting is not said to bear fruit.

So, first we need to know those limbs for this 32-letterd Mantra. It is said for this Mantra that:

OR if the MAyA Bijam (Hrim) is added before and after the Mantra in the chant, then it fulfills all wishes of the devotee.

After doing PrAtakritya and Vishnu PujA, one chants this Mantra.

From which we find that Brahma is the Rishih for the Mantra, Anushtupa the Chandah and Nrisimha the DevatA.

This is done for purifying our body and hands, by invoking God-principle within our own body. So, we are making Nrisimha literally to come into our body. His hands are invoked in our hands and likewise for other body parts.

Because in Tantras it is said, that one can not worship God without becoming God himself.

These NyAsas are done in the following manner for this particular Mantra:

Then comes DhyAnam which is basically reciting some Sloka peculiar to the Deitry. This is said to bring the Deity immediately to the place where the chanting is done. Sometimes, it is not even advisable to do Japa without reciting the DhyAna Sloka first.

The meaning of the DhyAnam is roughly this:

Nrisimha's body's complexion is like that of a mountain made of precious jewels. And that glow is terrifying the demons. His hands are resting on the thighs. He has three eyes and the body is decked with clothing made with Ratnas. His two hands are holding the Shankha and the Chakra. The face is terrifying because of the teeth and the tongue, which is coming out and which looks like a flame of fire. Half of his body is that of a lion and the other half is that of human. ....

After meditating on Lord Nrisimha thus, the devotee has to offer mental worship to him (MAnasopAchAra PujA).

Then he has to do Pitha PujA, Avarana PujA (that is done on the Nrisimha Yantra) and ShadAnga PujA like this:

For PuraschArana of the Mantra one should do 32 lakhs of Japa and thereafter 1/10-th of that number of oblations are to be offered in the Homa. Oblation should be of Ghee made PAyasam.

The Brahma SamhitA have a Trailokya Vijaya Nrisimha Kavacha, which is comprised around this 32-lettered Mantra (this is found in TantrasAra's pp 591).

This made me to think that the Mantra is also found in the Brahma SamhitA, but the author does not mention the source.

He simply says this:

10
Whom & how to worship to develop fearless or fierce instincts?
13
Is it true? chanting mantra without moving lips and tongue gives more effect?
9
Third eye of Lord Narasimha

17
What scriptures discuss Ghandaberunda, the bird beast created by Narasimha?
3
How did the Vedic Rishis chant Gayatri Mantra?
6
What is the story of Narasimha being born in the ocean?
4
Correct Trayakshar Mrityunjaya mantra
10
Where Padma Purana says that a parrot can learn to chant the Hare Krishna maha mantra?
3
What is the name of consort for Narasimha avatar?