What is Fullness and Emptyness (void) according to the Vedas?

I was reading a post containing the following lines taken from Veda, where I could not understand.

How do Veda define for Emptyness or void? 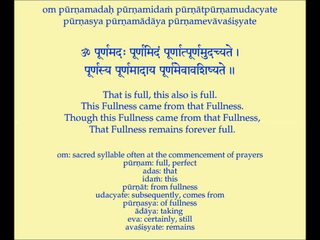 This is actually the following Shanti PAtha from the Upanishads. I find it at the start of the Ishopanishad, which is part of the Shukla Yajurveda's VAjansaneyi SamhitA.

That (or the Parabrahaman) is full; this (or the Brahman which is NAma Rupastha i.e which is having name, form) also is full; From fullness comes fullness; When fullness is extracted (or removed) from fullness (that is removing Purnatva from KArya-Brahman), only fullness (i.e KArana Brahman or the Parabrahman) remains.

Adah ---- That; which is denoting here the Brahman that is established in Paroksha Rupa or KArana Rupa i.e as the cause and not the effect.

Idam --- This ( i.e the Brahman which is manifested with name forms. Which resulted from the cause, but it's still the same Brahman, so both are eqaully full or infinite).

So, both are the same Brahman, with one in the form of cause (KArana) of everything and another as the KArya or the effect of that cause. This later one is having NAma-Rupa.

Now, this following line says, when we get the required knowledge (VidyA), which removes the ignorance or veil that make us to differentiate between this two so-called types of the same Brahman, then only the Brahman (which is the cause of everything) is that which remains.

purnamevAvasghishyate- Purnam eva (only Brahman who is the cause) avashishyate (remains).

This also explains a mathematical concept that taking infinity out of infinity, only infinity remains. Purna means "full" or "infinite".

See the following Mantra from the Atharva Veda, which also says the same:

Some people incorrectly renders this Mantra as meaning " (Infinity) minus (Infinity) is Infinity" to apparently show the limitation of ancient seers.

Hinduism do not subscribe to nihilism which is is commonly defined as the belief that nothing exists as a correspondent component of the self-efficient world. Or the concept of pure voidness.

In hinduism the self ,atman or brahman is always present in the form of truth or supreme consciousness. So there is no such a concept of complete emptiness in hinduism or in vedas. The brahman itself is complete and from that complete brahman this creation arose. Which we can see in the verse you quoted in the question.

The Nasadiya Sukta (Rig veda 10.129) mantra 2 tells us that Brahman was only existed before the creation .

Then there was neither death nor immortality Nor was there then the torch of night and day. The One breathed windlessly and self-sustaining. There was that One then, and there was no other In the beginning there was nothing. There was neither light nor darkness, neither the sun nor the moon, nor the earth, but one undivided nothingness. This nothingness is described in the Hindu scriptures as the unknown Brahman or indeterminate (avyakta) Brahman. It is also described as asat or Nonexistence (asat). This nothingness was believed to be the original state of things.

That means the Brahman was exsistace in it's bodyly form but in the form of Atman or Pure consiousness.

The Brihadaranyaka Upanishad Adhyaya 2 -Brahmana 1 - Mantra 1 tells us that the cause and the effect which was covered was exsisted before the creation. Here is the Shankar Bhashya.

There was nothing whatsoever here in the beginning. It was covered only by Death (Hiraṇyagarbha),

Question: Was it altogether void?

Vedāntin’s reply: Yet the Śruti says, ‘It was covered only by Death.’ Therefore on the authority of the Śruti we conclude that the cause which covered, and the effect which was covered, were both existent before the origin of the universe.

And what was that cause? The Aitareya Upanishad gives us the answer.

In the beginning all this verily was Atman (Absolute Self) only, one and without a second. There was nothing else that winked. He (Atman) willed Himself: "Let Me now create the worlds".

Adi Shankaracharya interprets this verse as describing how Saguna Brahman emananates from Nirguna Brahman. Here's what he this section of his Brihadaranyaka Upanishad Bhashya:

That is infinite, not limited by anything, i.e. all-pervading. The suffix ‘kta’ in the word ‘Pūrṇa’ (lit. complete) has a subjective force. ‘That’ is a pronoun denoting something remote; it means the Supreme Brahman. It is complete, all-pervading like the ether, without a break, and unconditioned. So also is this conditioned Brahman, manifesting through name and form and coming within the scope of relativity (the universe), infinite or all-pervading indeed in its real form as the Supreme Self, not in its differentiated form circumscribed by the limiting adjuncts. This differentiated Brahman, the effect, proceeds or emanates from the infinite, or Brahman as cause. Although it emanates as an effect, it does not give up its nature, infinitude, the state of the Supreme Self; it emanates as but the infinite. Taking the infinitude of the infinite, or Brahman as effect, i.e. attaining perfect unity with its own nature by removing through knowledge its apparent otherness that is created by ignorance through the contact of limiting adjuncts, the elements, it remains as the unconditioned infinite Brahman alone, without interior or exterior, the homogeneous Pure Intelligence.

Madhvacharya says that it refers to how Avataras emanate from Vishnu:

The Avataras of Mahavishnu are all said to be Purna or Full. Full is also that Mula form, called Param-rupam, or the highest form. From this Full or the Highest Form come out Avataras, who are also Purnas or Full.... When the Full, belonging to the Mula Form or Root Form, withdraws within Himself the other Purna or Full, namely, that which is known as the Avatara-form, then there remains the Full alone.

Not the answer you're looking for? Browse other questions tagged vedas philosophy etymology .

8
What is the meaning of this shloka and in what context it was written?
8
Shunya (nothingness) vs Purna (fullness) -- How to reconcile the seemingly contradictive statements in Uttara Gita?

9
What is the hymn to Vishnu that Shunashepa said to save his life?
6
Why is Rig Veda Book 2 Hymn 23 Verse 1 not used for summoning or praying to ganpati?
4
Where do the Vedas mention trees doing Yagnas?
9
What are the Vedas technically? How can Upanishads be called Vedas when some parts are neither revelations nor hymns dedicated to any specific deity?
7
Moksha in the Vedas (excluding the Upanishads)
12
How and why was the first ever thought generated?