Is there a concept of Triple Goddess in Hinduism according to stages of life?

All Devi worshippers are aware of the three main forms of the goddess - Ma Kali, Ma Lakshmi & Ma Saraswati. They can be considered as triple goddesses that correspond to the male Holy Trinity. 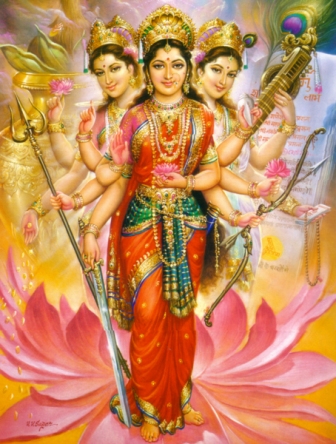 A similar concept of Triple Goddesses exists in neopaganism however it represents the different aspects of goddess as the Maiden (young woman), Matron (married/carrying a child) & Crone (old lady). 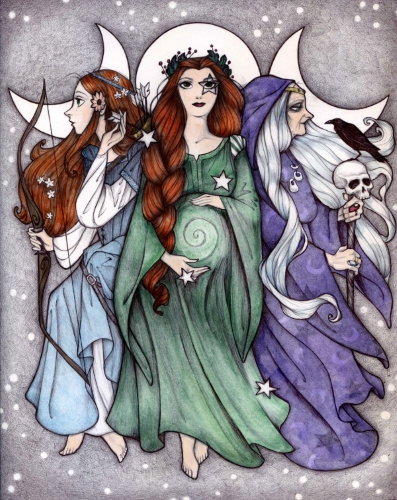 Interestingly, while going through the Devi Bhagvatam, I came across a similar concept in relation to Goddess Gayatri. Devi Bhagvatam Chapter 9 Book 12 mentions the following ode to the goddess:

“O Devî Gâyatrî! Obeisance to Thee! Thou art the Great Vidyâ, the Mother of the Vedas, Higher than the Highest; Thou art Vyârhiti represented by the Mantra ‘Om Bhur Bhuvah Svah,’ O Mother! Thou art the state of equilibrium, i.e., the Turîya; Thou art of of the Form of Hrîm; Thou art Svâhâ and Svadhâ; Thou grantest the desires of the Bhaktas. Thou art the Witness of the three states, Jâgrat (waking), Svapna (dreaming) and Susupti (deep sleep). Thou art the Turîya and Sachchidânanda Brahmâ. O Devî! Thou resident in the Solar Orb and appearest as a ruddy girl in the morning, an youthful maiden at noon and a black old woman in the evening. O Devî! Obeisance to Thee!

I wanted to know if there are any other scriptures that refer to the Goddess in these three forms that are based on stages of life rather than their functions/consorts.

In Devi Purana [Shakti Peetank] of Gita Press Gorakhpur the story of the Trinity Goddesses is narrated. The Three Gods Brahma, Vishnu and Mahesh decided to acquire their Shaktis and so they engaged in worshiping Devi Adi Shakti in Her true form. Pleased with their austerities the Devi appeared before them in Her fearful form of Kaali. She was huge, her body black like the moonless night, digambari, her eyes bloodshot and her tongue dripping blood hanging out from her mouth. with many hands and heads.

Brahma and Vishnu frightened at this apparation ran away, but the Adiyogi Shiva remained seated unmoved. Pleased the Devi said, it is in this form I will be your wife. I am equally pleased with the other two Gods too and hence will take forms that will be pleasing to them to live with them. She then took on the forms of Sri Lakshmi and Sri saraswati to live with Vishnu and Brahma.

This episode is narrated in the first part of the Purana and is then narrated once again when sati desires to attend Daksha Yagna and Shiva gently restrains Her, she once agai takes this frighteneing form to remind Shiva that she Sati is indeed Devi Kaali and in her frightful form riding a chariot drawn by lions she reaches Daksha's Yagyashala.

Since I do not have the book handy - I am unable to giv the exact chapter and verses. If any person is aware, the answer may be accordingly edited.

Not the answer you're looking for? Browse other questions tagged devi goddess devi-bhagavata-purana gayatri .