Is there any mention of a fountain of youth in the Purans?

The concept of the fountain of youth is common in many other religions. Are there any similar mentions in Hindu purans? (I searched quite a lot, but I did not find any. Perhaps it is known by a different name?)

Immortality and Eternal Youth go hand in hand. The concept of Amrutha is present, which when we consume, gives us immortality. Is there a similar portion to gain youthfulness?

Are there any similar mentions in Hindu puranas. ?

Yes there is similar concept to fountain of youth or pond of youth in Hinduism Puranas. Which is called Siddha -Kunada OR Ashvini Kunda. Created by the siddha Rishis.

Background - When the heavenly physicians the Aśvinī-kumāra brothers once visited Cyavana Muni, the muni requested them to give him back his youth. These two physicians took Cyavana Muni to a particular lake, in which they bathed and regained full youth. After this, Sukanyā could not distinguish her husband. She then surrendered unto the Aśvinī-kumāras, who were very satisfied with her chastity and who therefore introduced her again to her husband. Cyavana Muni.

kasyacit tv atha kālasya nāsatyāv āśramāgatau
tau pūjayitvā provāca vayo me dattam īśvarau
Thereafter, some time having passed, the Asvini-kumara brothers, the heavenly physicians, happened to come to Cyavana Muni’s asrama. After offering them respectful obeisances, Cyavana Muni requested them to give him youthful life, for they were able to do so. SB 9.3.11

Cyavana Muni said: Although you are ineligible to drink soma-rasa in sacrifices, I promise to give you a full pot of it. Kindly arrange beauty and youth for me, SB 9.3.12

After taking dip in the kunda Rishi Chavana , who was very old and unattractive became youthful again.

This kunda is also mentioned in Vamana purana - Chapter 34 - Verse 31- Account of the forests , rivers and Tirthas of Kurukshetra. (see page no. 142) ,Which the Vamana Purana is calling Ashivini Kunda OR Ashivini Tirtha , and is near to Kurukshetra.

The man who exercise checks on his senses and has keen obeisance , gets a beautiful complexion and frame as blessings for bathing in the holy place of Ashvini-Kumaras.

So the similar concept like fountain of youth is also present in puranas with slight difference that its name a kunda rather than fountain which can restores youth . 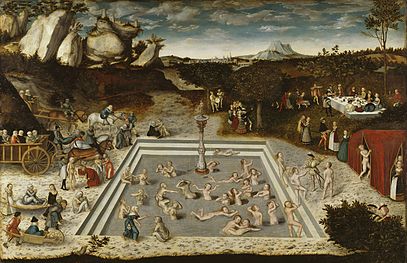 Not the answer you're looking for? Browse other questions tagged puranas .