Why do nakshatras have both a presiding deity and a ruling planet(graha)?

What is the difference between a presiding deity and a governing planet(graha)?As far as I know,each of the navgrahas has their own governing Lord.

To answer your title question:

It is because each Nakshtra is ruled by a Graha and each Graha is again ruled by a deity. Which Graha rules which Nakshatras is something already mentioned in this answer.

And, each Graha being ruled by (or presided by) a particular deity is again mentioned in the Matsya Purana for example.

And Graha does not only have a ruling Deity (Adhi Devata), but it also has a Pratyadhi Devata associated with it.

From this Matsya Purana chapter, we find which those deities are:

A Vedi (platform) is to be prepared with white rice grains with Surya Deva the Center, Mangal in the South, Brihaspati in the North, North East with Budha, East as Shukra, South East as Chandra, West as Shani, South West as Rahu, and North West as Ketu. The Adhi Devatas to each of the Planets are as follows: Shiva for Surya, Parvati for Chandra, Skanda for Mangal, Vishnu for Budha, Brahma for Brihaspati, Indra for Shukra, Yama for Shanaischara, Kaala Devata forRahu and Chitragupta for Ketu. The Pratyabhidevatas respectively are Agni, Varuna, Prithvi, Vishnu, Indra, Aindri, Prajapati, Sarpa and Brahma. Besides, Vinayaka, Durga, Vayu, Aakasha, and Ashvini Kumars and these are also to be invoked by individual names. While visualising the various Grahas, one has to visualise Mangala and Surya as of red colour, Chandra and Shukra as of white colour, Budha and Brihaspati as yellow, Shani and Rahu as black and Ketu as grey. The Kartha who is to perform the worship the Grahas should try to secure these coloured Vastras (clothing) and flowers as also apply Gandha (Sandalwood paste), offer Dhupa, Dipa and fruits.

Also, from this page, which describes the various possible remedies, for afflicted Grahas, you will find, that directly worshiping the ruling Deity is also a solution, just like propitiating the particular Graha is.

So, in conclusion, we can say that the ruling deities are more dominant, simply because they own ruler-ship of the planets.

Therefore, by propitiating the ruling deity and the over ruling one, we can propitiate the planet itself with more success.

In other words, suppose, Chandra or Moon is problematic in a chart, directly worshiping Goddess Gauri, who over rules moon, is supposedly a better option, than worshiping moon itself, although that is also an option.

You can check from here the meaning of Adhi Devata, which is "presiding deity, tutelary deity or the supreme deity".

So, Adhi Devatas obviously hold more dominance, as they are, in a way, controller of the respective planets. 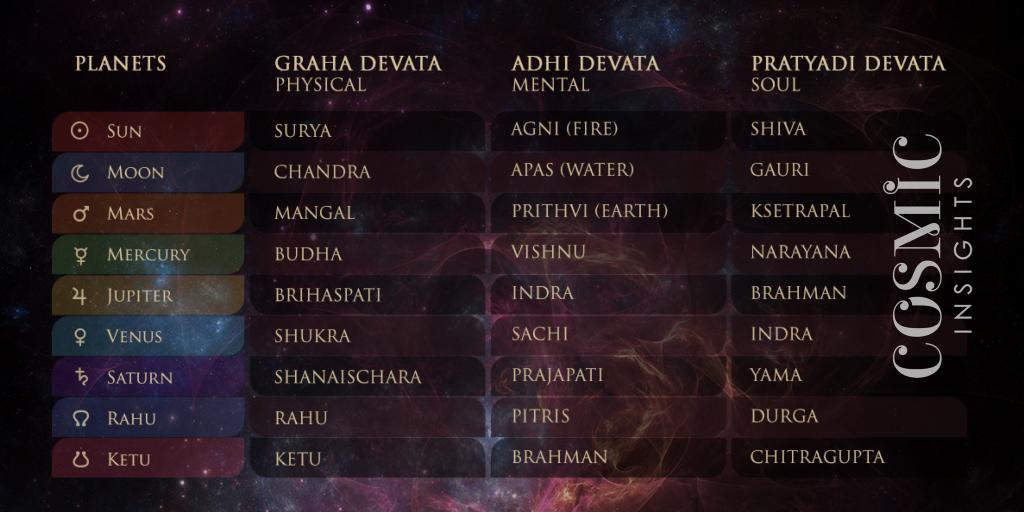 For sun,the Adhi deveta being Agni demonstrates the nature of Sun as Fire and light. The Pratyadi devata being Shiva shows that Sun is the Lord of the Grahas.

Not the answer you're looking for? Browse other questions tagged astrology navagraha nakshatra .

6
What are graha and Nakshatras?

9
Why is Shravana Nakshatram considered the "birth star" of Vishnu?
3
In jyotish (vedic astrology), how is a sign (rasi) ruled by a planet (graha)
6
What are graha and Nakshatras?
4
Can yantras be used a remedies for Doshas in horoscopes and nakshatras?
7
What is the difference between Sun and Sun God?
2
The original order of Week days as practiced/used today is completely wrong?
8
Is there a Puranic basis for Graha relationships in Jyotisha? Else what is their basis as is traditionally taught?