Is there any mentions about the benefits of using crystals in any Hindu Scriptures?

Crystals are widely used by many people around the world for various purposes. Does Hindu Scriptures support the usage of crystals?

Does Hindu Scriptures support the usage of crystals?

In Hinduism scriptures crystal is also called SPHATIKA. This white coloured hard, transparent stone s worn for an increment in fortune and knowledge. According to some accounts Sphatik Mani (Rock Crystal) was formed from the sweat of Bali. As you enquired about the Crystals apart from gems, it seems that the scripture is not giving the details of crystals like its various forms like quartz and alum but just mentioning the word Sphitika or crystal.

Shiva Mahapurana - Vidyesvara Samhita - Chapter 18 - Glory Of Shiva-Linga - Tells us about benefits of worshiping Shiva-Linga made up of crystals. Page no. -119 .

The crystal linga as well as Bana linga fulfil the desires of all. In case of linga prescribed for a particular cast is not available any other linga could be worshipped.

The term crystals and its usage is also mentioned in Brihat Samhita of Varaha Mihira and Garuda Purana .

In Hinduism scripture sometimes Diamond stone is also called as sphatika which is in crystalline form. The description of Imitation diamonds are also given in the a chapter of garuda Purana. Garuda Purana tells us that prosperity ,long life ,increase of wives and progeny and domestic animal ,and the bringing home of a teeming harvest ,attend on use of diamond. And are prohibited articles of female wear (they are supposed to possess mystic virtues of making them sterile and unhappy). Whereas its said that a king who wear's a diamond dazzling with lightning flashes is sure to subdue the prowess of his neighbouring monarchs and to exercise unbounded control upon his vassals and liege subjects.

Here is what Garuda Purana is saying about crystals.

The Diamond the pearl , the Karketana , the Pulaka Rudhiraktya (blood stone) the crystal and coral should be carefully collected. Subject to the advice to the experts on the subject.

Apart from iits benefits to the royals , the different color diamond or Spatikas are also recommended for people of different varnas that are helpful for them in following their Varnashrama-Dharma i.e. duty.

A Brahmana is enjoined to weara diamond which is colored like a conch shell or a kumuda flower or a white crystal ,whereas a ksatriya should wear one that is colored Brownish yellow like the eyes of of hare. A diamond possessed of il soft greenish color like the tender leaves of a plantain tree ,prove benificial to a man of the Vaisya class , while a sudra would do well to wear a diamond that has a luster like that of newly washed sword.

So in conclusion Hinduism scriptures mainly deals with crystals as gem-stones , and there is no seprate sub category of crystals other than those are precious gem stones or Mani. Althoug the scripture sometimes is talking about imitation crystals like glass etc. but not much information and classification is there because gemmology or crystallography is not its scope. And from the above we can say that crystals are befinicial in removing sins , as well as in overall progress. A Rigveda Upanishad called AKSHA-MALIKA Upanishad is mentioning that crystals are also used in Rosary Beads. 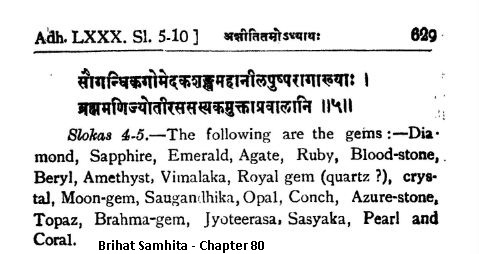 Not the answer you're looking for? Browse other questions tagged scripture vedas puranas .