Are there any Madhwa temples famous for their architecture/history/popularity with devotees?

There are united nations world heritage sites thats are Siva temples. iyengar vaishnavites have tirupati venkatachalapati temple that has a large number of devotees and tons of money. Off the top of my head, can't think of a famous Madhwa temple.

The most popular Madhwa temple is the Udupi Sri Krishna temple in Karnataka. It gets 545,000 visitors per year, as described in this journal paper.

Udupi is the birthplace of Madhvacharya, and he's the one who installed the Krishna statue, as described in this article: 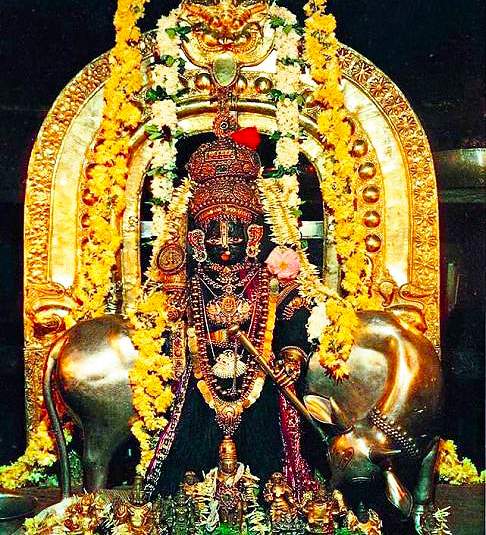 The amazing story of how the Bala Krishna Deity crossed the ocean from faraway Dvaraka in Northwest India to Udupi in the south is told in Madhva-vijaya,the biography of Srila Madhvacharya. Madhva wanted to have a temple of Lord Krishna in Udupi; the devotees could then worship and serve the Lord and ennoble their souls. Well, it so happened that in Dvaraka, one of the main places of Krishna’s pastimes on earth five thousand years ago, a Deity lay concealed within a large mass of gopi-candana clay (the yellowish clay Vaishnavas use daily in marking their freshly bathed bodies as temples of Lord Vishnu). No one knew the Deity was there, but because the lump of clay was exceedingly heavy, some sailors loaded it onto their merchant ship as ballast. On the ship’s southward journey, just off the coast of Udupi, a tempest blew the ship aground on a sandbank.

On that very day, Srila Madhvacharya absorbed in composing Dvadasha-stotra, his famous twelve-part poem praising Lord Krishna, had gone to the beach to bathe or, as some say, to receive the Lord. Upon seeing the ship caught fast on the sandbank and hearing the cries of the sailors in distress, Srila Madhvacharya waved his cloth in their direction. This calmed the stormy seas, and the ship floated free. Madhva then guided the vessel to safety. Eager to show his appreciation, the captain offered Madhva whatever he wanted from the ship’s cargo. Madhva chose the heavy lump of gopi- candana clay. Disciple attendants of Madhvacharya had just started back to Udupi with the large lump of clay when, but a short distance from the beach, the lump broke in two, revealing the handsome Deity of Lord Bala Krishna. But now the combined effort of thirty of Madhva’s disciples could not budge the Deity. Only when Madhvacharya himself embraced and lifted the Deity as if He were a child did the Deity consent to be moved. In great transcendental ecstasy Madhva carried the Lord the four miles back to Udupi. On the way he completed the remaining seven parts of Dvadasha-stotra, reciting the verses out loud. Back in Udupi, Madhva bathed the Lord in the lake known as Madhva-sarovara and enshrined Him in the Sri Krishna Matha. Srila Madhvacharya instituted rigorous standards for worshipping Sri Krishna, and whenever he was in Udupi he would personally perform the thirteen daily worship ceremonies for the Lord.

By the way, for the record Tirupati is not run by Sri Vaishnava priests, but by Vaikhanasa priests.

Not the answer you're looking for? Browse other questions tagged temple madhwa .