Are Lakshmi and Mahalakshmi different goddesses?

Lakshmi has a history from early scriptures and eventually became Vishnu's consort in the Puranic period. She seems to have become subservient to Vishnu after that. So much so that one of the sub-sects of Iyengar Vaishnavites regards her as a Jivatma, if I am not mistaken.

this site says 'Mahalakshmi is the supreme Deity Who is also known as Tripura Sundari or Sri Vidya or Lalithambika or Lalitha. Mahalakshmi is the confluence of Lakshmi (satvic), Saraswathi (rajasik) and Kali (tamasik) powers. Here, the term “Maha” is not an adjective used for the noun “Lakshmi”.'

You can from here read the Mahalakshmi Ashtakam (Ashatakam is a Stotra composed of 8 verses) which is of course dedicated to Goddess Mahalakshmi. The Stotram was said by Devaraja Indra and is found in the Padma Purana:

But this clearly is the depiction of Sri Lakshmi and not that of the Supreme Goddess Sri Lalita Tripurasundari.

The next verse of the Stotra makes things even more clear:

As regards, the supreme Goddess Lalita, then she does not ride the Garuda and we find from the Lalita Trishati of the Brahmanda Purana:

Lagna Chaamara Hastha Shri Sharada Parivijitha
Lakshmi and Sharada (or Sarswati) serve you with Chaamara as a hand fan;

And, this is depicted in the following image of the supreme Goddess: 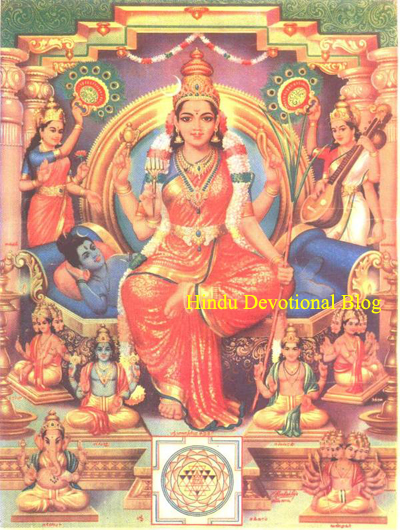 Also, it is a common practice to add Maha before a deity's name, it does not change the deity itself.

For example, this page describes a Ganesha Puja. But while invoking the deity the Mantra being used is Mahaganapatim Dhyami Avahayami

Similarly, this page describes a Vishnu Puja, but the invocation uses the Mantra Mahavishnum Dhyami Avahayami

Therefore, Lakshmi and Mahalakshmi both refer to the same deity. And Lalita is of course the supreme Goddess and is a different deity.

As requested by user SK.. updating the answer.

The following passage from the Devi Bhagavatam (DB) proves that the supreme Devi is the combined form of Mahalakshmi, Mahasaraswati and Mahakali. So, Mahalakshmi is immediately ruled out by this from being the supreme Goddess.

S’iva is beyond Prâkritic attributes, eternal and ever omnipresent; She is without any change, immutable, unattainable but by yoga; She is the refuge of the universe and Her nature is Turîya Chaitanya. Mahâ Lakshmi is Her Sattvikî S’akti; Sarasvati is Her Râjasik S’akti and Mahâ Kâlî is Her Tâmasik S’akti; these are all of feminine forms. 21-25. The assuming of bodies by these three S’aktis for the creation of this universe is denominated as "Sarga" (creation) by the high souled persona (Mahârpurusa), skilled in S’astras. And the further resolution of these three S’aktis into Brahmâ, Visnu and Mahes'a for the creation, preservation, and destruction of this universe is denominated (in this Purâna) as Pratisarga (secondary ereation.

The same can also be proved by using Sri Chandi (from the Markandeya Purana) as the reference.

Further references, that prove that Lakshmi and Mahalakshmi are not different deities and that she indeed is the consort of Lord Vishnu are given below:

20-22. Janamejaya said :-- “O Bhagavân! In olden times, the World mother Parâ S’akti handed over Gaurî to Hara, Laksmî to Hari, and Sarasvatî to Brahmâ, born of the lotus from the navel of Hari. Now I hear that Gaurî is the daughter of Himâlayâ as well of Daksa; and Mahâ Laksmî is the daughter of the Ksiroda ocean (ocean of milk). They were all originated from the Prime Devî;

This very beautiful Laksmi Devî is the complete master of the senses; She is of a very peaceful temper, of good mood and all-auspicious. She is free from greed, delusion, lust, anger, vanity and egoism. She is devoted to Her husband and to Her Bhaktas; Her words are very sweet and She is very dear to Her husband, indeed, the Life and Soul of Him. This Devî is residing in all the grains and vegetables and so She is the Source of Life of all the beings. She is residing in Vaikuntha as Mahâ Laksmî, chaste and always in the service of Her husband. She is the Heavenly Laksmî, residing in the Heavens and the royal Laksmî in palaces and the Griha Laksmî in the several families of several householders.

Do you need more proofs? Anywways, why Lakshmi is called Mahalakshmi is given in the same Purana:

The two-armed person first made over to Mahâ Laksmî the four armed One; then the two armed Person Himself took Râdhâ. Laksmî looks on the whole universe with a cooling eye; hence She is named Laksmî and as She is great, She is called Mahâ Laksmî. And for that reason the Lord of Râdhâ is two-armed and the Lord of Laksmî is four-armed.

And, here the two-armed person being referred to is Narayana or Lord Vishnu.

1-2. Nârada said :-- “O Lord! How did the eternal Devî Mahâ Laksmî the dweller in Vaikuntha, the beloved of Nârâyana, the Presiding Deity of Vaikuntha, come down to the earth and how She, became the daughter of the ocean? By whom was She first praised? Kindly describe all these in detail to me and oblige.”

According to āchārya Abhinavgupta, Lakshmi & Mahalakshmi are different at least in human body. Lakshmi is the goddess of wealth but Mahālakshmi is the embodiment of sense of smell.

I bow to Lakshmi, goddess of wealth, who is fond of perfume & all good scents & who is situated in the abode of Ishāna (northeast). To Mahālakshmi, who embodies the sense of smell & who worship Bhairavnath with various perfumes & scents I eternally bow. Verse 13 Dehasta-devata-cakra Strotra

Yes, Devi MahaLakshmi is Adi Devi Prakriti, and Lakshmi Devi is created by Her.

I am giving story in Short, you can read full story in below link.

The King asked- O Rishi! you told me various forms of Devi Chandika, now please tell me about Her Prakriti and way to worship.

Medha Rishi said-
O King! This is the most secretive thing I am telling you. You are great devotee so nothing is there to be not told to you.

सर्वस्याद्या महालक्ष्मीस्त्रिगुणा परमेश्वरी ।
लक्ष्यालक्ष्यस्वरूपा सा व्याप्य कृत्स्नं व्यवस्थिता ॥ ४॥
The Devi MahaLakshmi is Primordial to all and is form of the three Gunas(Sattva, Rajas, Tamas) and is Supreme Goddess. She pervades the whole Universe in visible and invisible form.

O King! seeing the whole existence empty this Supreme Goddess took up to Tamas Guna and assumed the form black as collyrium with teeth coming out from Her beautiful face. Then MahaLakshmi name this form as MahaKaali.

After this, She took up to Sattva Guna and assumed a form white as moon holding Veena, Books and Rosary. She named this form as MahaSaraswati.

Telling them thus, MahaLakshmi herself created a pair of male-female who were born of Golden Womb, looked very beautiful and were sitting on Lotus.

Then Goddess MahaLakshmi made Trayee(Saraswati) as wife of Brahmaa, Gauri wife of Rudra, and Shree (Lakshmi ) as wife of Vishnu Vaasudeva.

Virincha(Brahma) along with Swaraa(Saraswati) created Universal Ovum. Rudra along with Gauri pierced that Egg.

Then Keshava along with Lakshmi nourished and looked after all creation.

O King! This MahaLakshmi is this way Unborn and Goddess of All. She is formless and she takes various forms which are given various names.

She has innumerable names and therefore cannot be addressed just one name.

Not the answer you're looking for? Browse other questions tagged lakshmi .

22
Is there any scripture that tells story about Lord Vishnu and MahaVishnu?

41
Who are the children of Vishnu and Lakshmi?
7
Are there sects for Lakshmi or Saraswati?
4
Who are the parents of Devi Lakshmi?
0
Are not Shri and Lakshmi name of one goddess?
7
What are the dwelling places of Sri Lakshmi Devi?
7
What's the relation between Shiva and Maa Lakshmi?
2
Prayer with Sree Lakshmi Ganapathi instead of Sree Ganapathi and Sree Lakshmi