Is the Anukramani index of sages and deities of the Rig Veda available online?

As I discuss in this answer, how the Vedas originated is that from time immemorial, sages known as Dhristas have heard mantras (sacred verses) directly from the gods during a state of Tapasya (deep meditation). And then in the Dwapara Yuga, a sage named Krishna Dwaipayana Vedavyasa (or Vyasa for short) compiled these verses into a set of four books we call the Vedas. (Technically Vyasa only compiled the Rig, Yajur, and Sama Vedas - the Atharvana Veda was compiled separately by the sage Atharva and Angiras).

The verses of the Vedas come from the Tapasya of hundreds of different sages, and they're addressed to lots of different gods. So to preserve all this information, the sage Shaunaka (among others) compiled the Anukramanis, a set of systematic indices for the Vedas which, among other things, documents the sage who heard each verse from the gods, and the deity that each verse is addressed.

My question is, is the Anukramani of the Rig Veda available online in English? The Anukramanis give lots of information for each verse, including information about poetic meter and content, but all I really want is the names of the sages and deities for all the hymns.

Now this webpage claims to provide the sage associated with each hymn, but it's inadequate, because first of all it doesn't describe the case where there's ambiguity as to who the seer of a hymn is, and it also doesn't describe the case when different verses within a hymn were heard from the gods by different sages. And the Ralph TH Griffith translation of the Rig Veda claims to provide the deity of each hymn, but when different verses of a hymn are dedicated to different gods, it often just says "Various" and leaves it at that.

It took a lot of work, but through careful searching of the Oxford's Rig Veda translation through Google Books, I was able to compile most of the Anukramani's sage and deity information, except for some hymns in books 8 and 9 as I'll describe below.

So without further ado, here's the list of seers and deities for each Book of the Rig Veda, in PDF format:

EDIT: The user hfdfh was good enough to write down a lot of the missing names in Books 8 and 9 here. So now I am just missing Hymns 40-100 of Book 8.

Anukramanika is an index - The Rishi index needs to be made - The most authentic sources is Department of Maharishi Vedic Science.

Available at VedicGranth.org (the site looks related to Arya Samaj or Dayananda Sarasvati)

To answer the bounty question:

Can someone re-upload the files in the accepted answer? They have been deleted.

You can view/download the Ṛgveda Anukramaṇī from here: 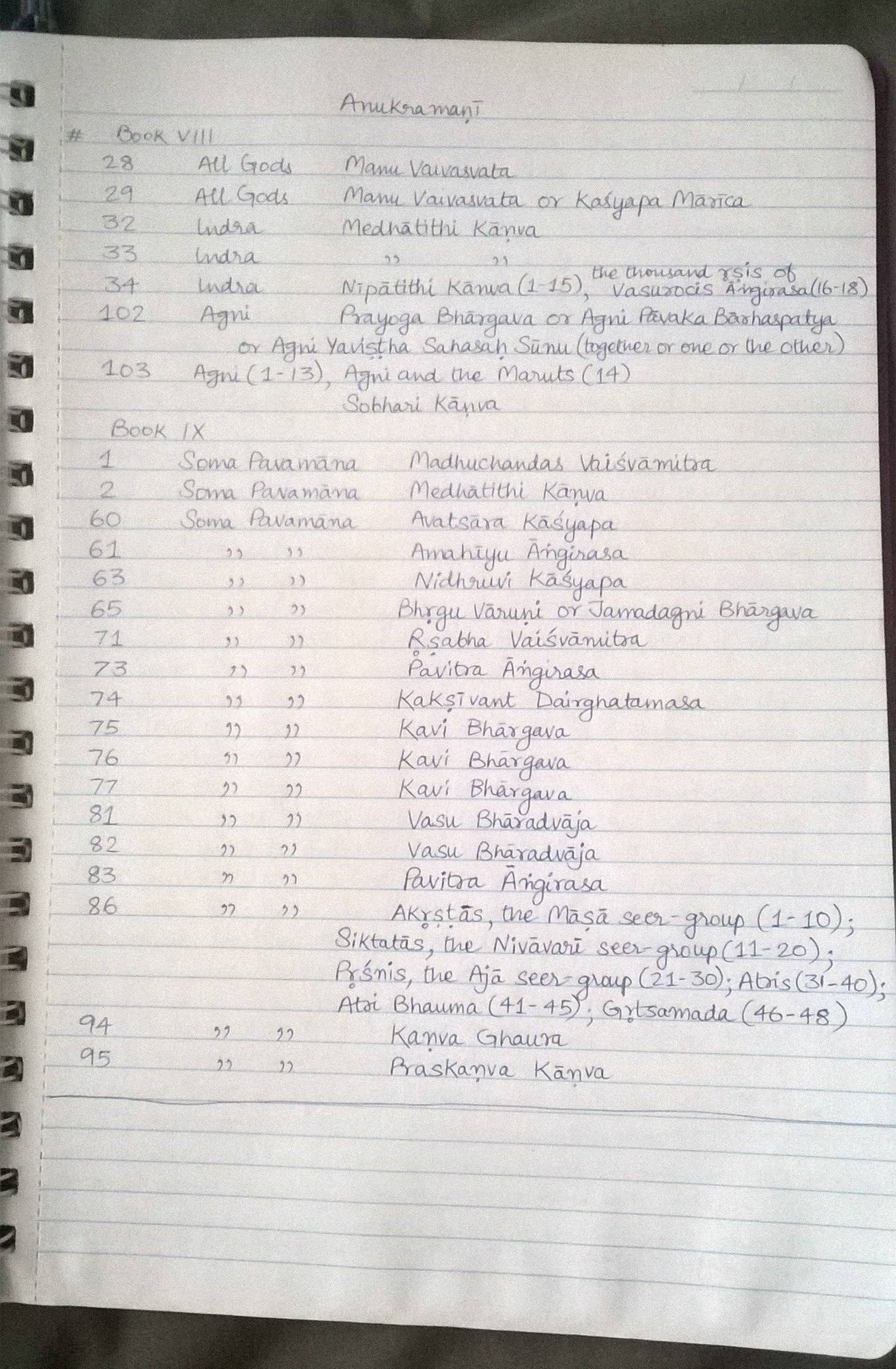 Not the answer you're looking for? Browse other questions tagged vedas mantras rig-veda translation-request rishi .

5
Where can I find the authentic and complete Vedas online? [Hindi + English]
59
How did the Vedas in Hinduism come into existence?
28
How was the universe created?
11
Was Rishabha, the first tirthankar of Jainism, an incarnation of Lord Vishnu or Lord Shiva?
11
Rules for wearing yagyopavit by women (yes it is possible)
13
What scripture does the sacred thread mantra come from?
12
Did Vasishta's brother sage Agastya have a previous birth?
9
Is Vishnu a Vedic deity ? Are there any mantras attributed to him?
10
Is Krishna mentioned in the Chandogya Upanishad?
11
Why is Indra known as Vaikuntha in some Rigvedic verses?
See more linked questions

28
Why do the Vedas need to be recompiled every Dvāpara Yuga?
7
Who is the seer of the Isha Upanishad?
11
Has the Anukramani of the Shukla Yajur Veda ever been published in any form?
10
Who is the Brahmana changed into a woman in the Rig Veda?
5
What parts of the TaittirIya Samhita of the Yajur Veda are Shruti?
8
Is Shiva's son Kartikeya the rishi of two hymns of the Rig Veda?
9
Who is the seer of the Nila Sukta, the Vedic hymn to Vishnu's wife Nila Devi?
3
What are the arguments to show that the other Vedas are less authentic than the Rig Veda Samhita?