I think, I know what article you are referring to..

"the sun, with its planets and their moons, takes some star for its dual and revolves around it in about 24,000 years of our earth-a celestial phenomenon which causes the backward movement of the equinoctial points around the zodiac". - http://baharna.com/karma/yuga.htm

Imagine earth to a top (spinning top). When the top slows down, you must have seen that it spins and starts drawing an imaginary circle around its axis. Earth rotates like that, as of today around its axis. But this imaginary circle that the earths axis is drawing in the sky actually takes around 24000 to 26000 years to complete one circle. That is called precession of the equinox. 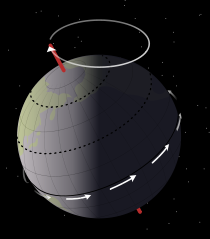 Also earth, the sun and solar system also is moving around the Milky way itself. This giant revolution around the center of the Milky Way takes approximately 225 to 250 million terrestrial years. - This is called the Galactic year. (http://en.wikipedia.org/wiki/Galactic_year).

Now, going back the Precession of the Equinox, the imaginary line that the Earth draws on the sky apparently traverses the zodiacal positions of the stars - The 12 zodiacs, and roughly it means that the each zodiac ranges for around 2000 - 2100 years. And the world and society experience that zodiac for that period. Somewhere in the region of 300 BC, Earth entered into Age of Pisces, and then somewhere now 2000 A.D to 2100 A.D, earth will enter into the Age of Aquarius ( The zodiac traverses in reverse, not forwards. After Aquarius, somewhere in the range of 4200 A.D , we will traverse into Age of Capricorn and so on.

You are vaguely right, in the sense that the value systems that exist during each age reflects the behavior of that zodiac. Some very impressive explanations are given for each zodiacal age in the Wiki. Take your time to go through them. But it does not indicate that value systems become corrupt.

I have lengths of yugas and kalpas according to दाते पंचांग.

Same is for night. Brahmas life can be calculated b multiplying above figure by 30(days)*12(month)*100(years).

Not the answer you're looking for? Browse other questions tagged yuga .

12
What is the duration (Timeline) of the four “Yugas”?

8
Living in Satya Yuga, Treta Yuga and Dwapara Yuga
4
Why do we not consider Brahma's night as a kalpa?
12
Ramayana ➡ Mahabharata: 31 Ikshvaku Kings. What was the (average) age of those kings?
4
Why is present Kalpa named as Sweta-Varaha Kalpa?
2
Why the year of the gods are taken as divine years for yuga calculations?