While praying, who are allowed to touch/caress "Shiva Linga", the sacred phallus?

As per this thread, there are various opinions of whether the idol at the temple should be touched or not: Is it allowed to hug/touch the main idol at a temple?

Now there is a special case of Shiva, which is known as "formless" (Nirguna/NirAkAra) aspect of Brahman, hence it may not have any idol as such. Yet, it's primarily worshiped in form of "Linga" (Phallus/Penis): Why is Shiva primarily worshipped in a linga form?

Many years back, our history professor told that, Not everyone should "touch" or "caress" the Shiva Linga. Especially women shouldn't do that, for the sake of modesty.
But in case of God, shouldn't everyone have equal rights, especially in today's era! 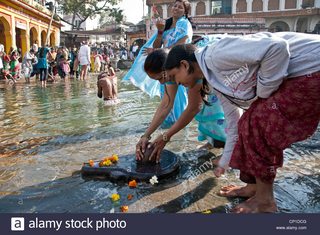 Who are allowed to touch/caress, the "Shiva Linga" while worshiping?

56
Why is Shiva primarily worshipped in a linga form?
11
If Shiva Linga is worshiped in all yugas then what curse did Rishi Bhrigu give to Lord Shiva?
6
Is it allowed to hug/touch the main idol at a temple?

6
What is the significance of viewing Shiva-Linga from in between the ears of Nandi?
8
What are the benefits of Parad Shiva Linga?
8
Who is the sage Pundarika who saw Vishnu coming out of a Shiva Linga?
9
What is the story behind the famous Shiva linga of Amarnath, India?
6
Has Shiva Linga worship been diluted over time from the real to the unreal?