Why is sage Krishna DvaipAyana known as Veda VyAsa & what is his relation with Beas river?

In Mahabharata the name "Krishna DvaipAyana" (Dark skinned, Island born) is used quite a lot. Yet the other usage of "Veda VyAsa" is more famous.

What's the origin of this second name?

Is the Punjab originated river "Beas" (Bias) which is said to be misnomer (अपभ्रंश) of VyAsa was indeed created by this Rishi?

Answering only your one Question Why is sage Krishna DvaipAyana known as Veda VyAsa?

Veda Vyasa is not a name but a post. As per Vishnu Purana,

Here is the Sanskrit shloka for Krishna DvaipAyana as Vyasa:

List of Vyasas is given in few other Puranas too, for example Kurma Purana: 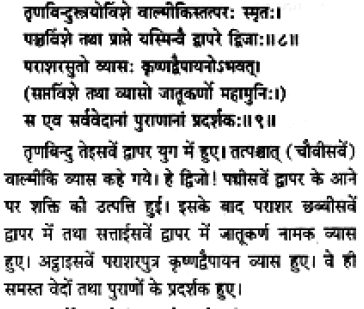 Seeing the advent of KaliYuga, He divided the Vedas into various Branches.
As he expanded the Vedas, the Muni got his name as Vyaasa.

Not the answer you're looking for? Browse other questions tagged mahabharata culture identification-request name vyasa .

4
Has Veda Vyasa seen Lord Krishna?
3
What is the story of Sage Dhaumya and his disciple Aruni?
6
Is the etymology of the name Yudhishthira correct?
0
Why did Veda vyasa use agni mantras of rigveda for Durga suktam?
3
Why is Veda Vyasa Siddhanta different from Vedanta Siddhanta in Sarva Siddhanta Sangraha?