Vaisheshik does not consider Shabda as pramana, then how they hold veda as valid and reliable source for knowledge

2) Vaiśeṣika school and Buddhism both consider their respective scriptures as indisputable and valid means to knowledge, the difference being that the scriptures held to be a valid and reliable source by Vaiśeṣikas were the Vedas. reference: https://en.wikipedia.org/wiki/Vaisheshika

Now my question is that when they do not consider Shabda as pramana, then how Vaisheshika considers Veda as valid and reliable source of knowledge?

Its also said in the sutra that Veda-Bhagvan i.e. Ishwara in the form of vedas ,know each and everything of this universe. On the account of description found in the vedas about the creation of universe , the vedas are considered as Valid source in all subjects. The Real nature of Dharma is only described in Vedas. the fruitfulness of performing of Yajnas , sacrifices are also observed , which is described in the vedas. i.e result of performing Yajnas.

Vaisheshika Darshana Says that the seers of Vedas i.e. the Rishis were highest sadhakas , they were Tri-kal Darshi's , they were very well aware of Past and Present. Because they were expressing their opinions by through research , that is why the mantras heard by them is Swa-Pramana. Because they were doing austerities. And Considering these qualities of the Seers of Vedas and these seers heard the Mantras of vedas i.e. divine words ,their words are to be considered as Pramana or valid source of knowledge. Its the divine words heard by seers and because of the the qualification of those seers also they are considered as valid Pramana. So vaisheshika Sutras Consider words of vedas as reliable source of knowledge or the Shabda Pramana because of Rishi's. Because the vedas always speak about truth . And those seers always thoughr about welfare of other beings the divine words heard by them is considered by vaisheshika as Shabda Pramana

.( Here the word Dharma means the knowledge of Padarthas or elements).

This is explained in Vaisheshika Sutras Chapter 1- Anuvaka 1 - Sutra 3.

Here we can read the sutra in Hindi

The same can be found in the last sutra of vaisheshika Darshana. Vaisheshika SutrasChapter 10 - Anuvaka 2 - Sutra 10

So on the basis of all these points Vaisheshika is accepting the words of vedas as Valid source of Knowledge. 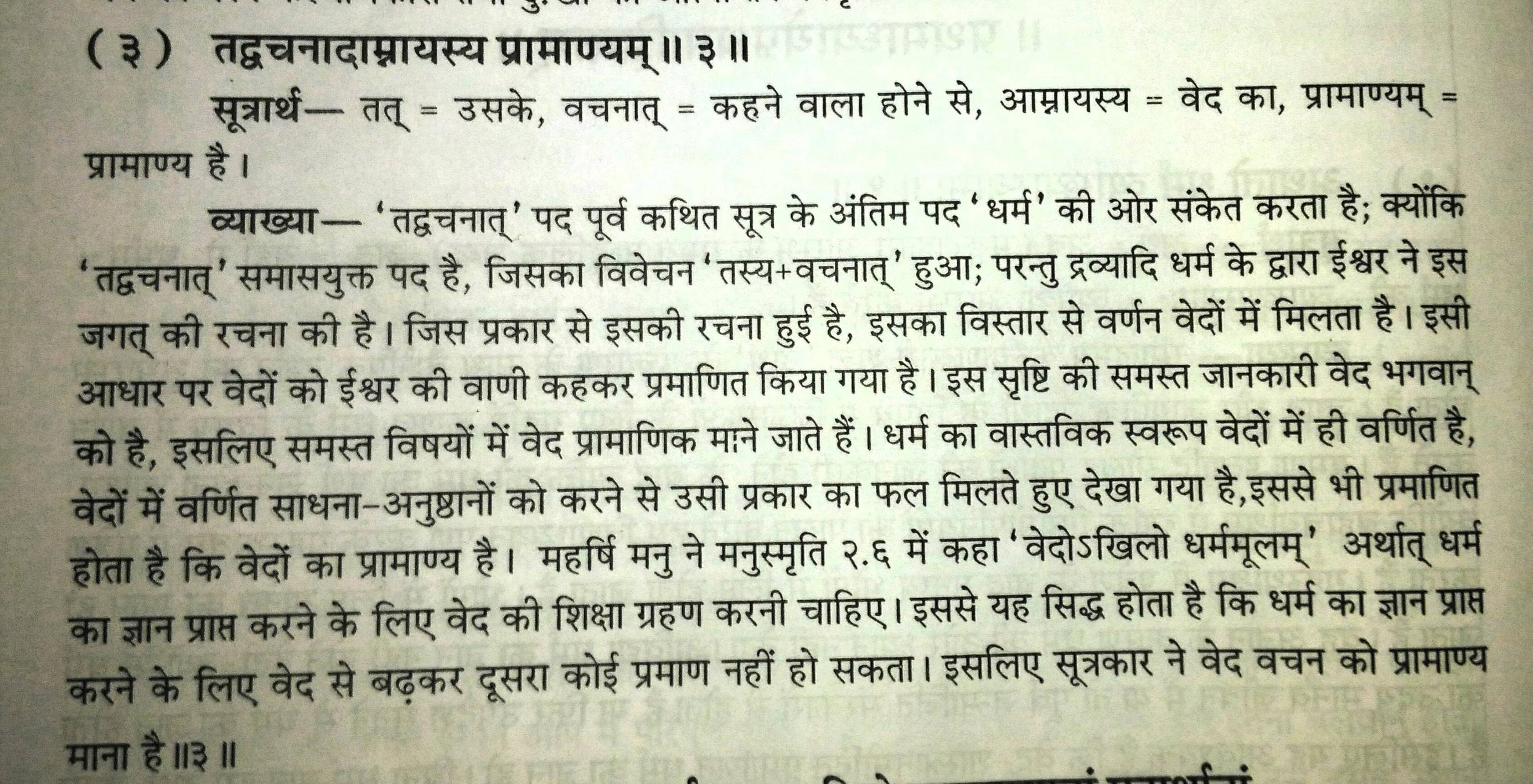 Not the answer you're looking for? Browse other questions tagged philosophy vaisheshika pramana .

5
Who believes in 10 Pramanas?

10
Pramanas: Prathyaksha vs. Shabda
2
Do all Vedantic philosophies agree on the number of Pramanas?
5
Who believes in 10 Pramanas?
5
If there is a conflict between Pratyaksha pramana and Sruti, which one takes precedence according to Vishishtadvaita Vedanta?