What are the four Quarters of Purusha as per Purusha Sukta?

Can Somebody explain me, what are the four Quarters of Purusha? As mentioned in the Sukta, I've been searching for a valid concrete answer for a long time, However I've personally come to certain conclusions(I maybe wrong). That सोऽयमात्मा चतुष्पात्- That Atman has four Quarters, a verse from Mandukya Upanishad, As Atman is Interchangeably referred as Purusha in the Upanishads, So maybe Vaishvanara, Taijasa, Praajna, And Turiya must be the four Quarters. To make my conclusions I refer some reference of Rangaramanuja muni's Bhashya

Please Refer from the Screenshot here:- 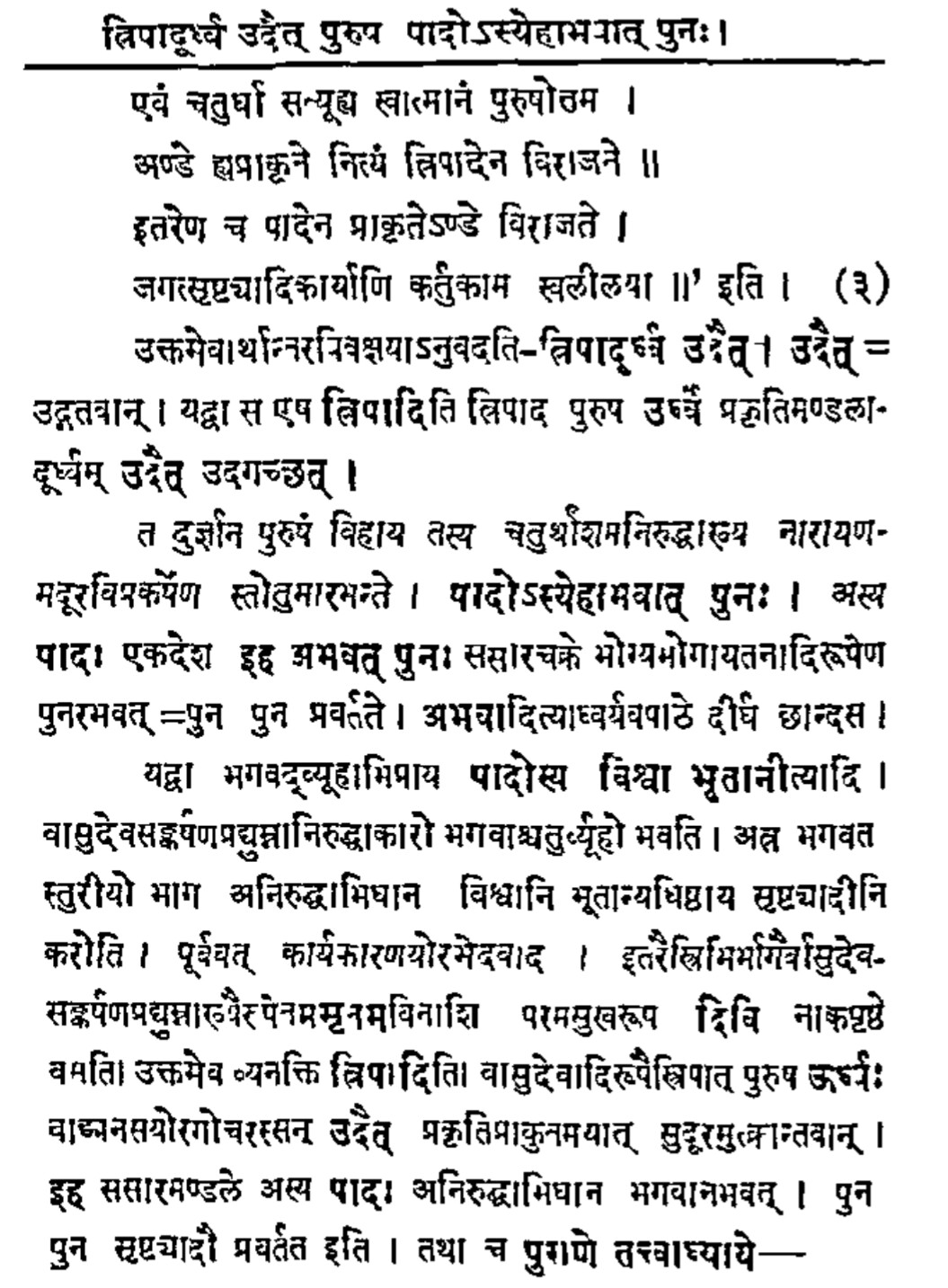 Translation :- Herein is the shloka from "पादोस्य विश्वा भूतानि" and rest(related to four Quarters of Purusha) are referring to the four Vyuha forms of the Lord.

Please Refer from the Screenshot here:-

Translation :- The Great Purusha having divided himself into fourfold Quarters the rest three shines in the celestial empyrean's to and he (Aniruddha) the Fourth Quarter form of Narayan creates the world by forebearing Prakriti.

In both of these reference it concludes that fourth Quarter of Purusha is the fourth Vyuha form of Narayana - Aniruddha, who then Creates the Manifest world by forebearing Prakriti, While the rest three vyuha's are the rest three quarters of the supreme purusha.

Now Here we too see, that there are citations of some pänchrätra ägama's that Four Vyuhas forms of Näräyañ also represent the four states of Ätmä. 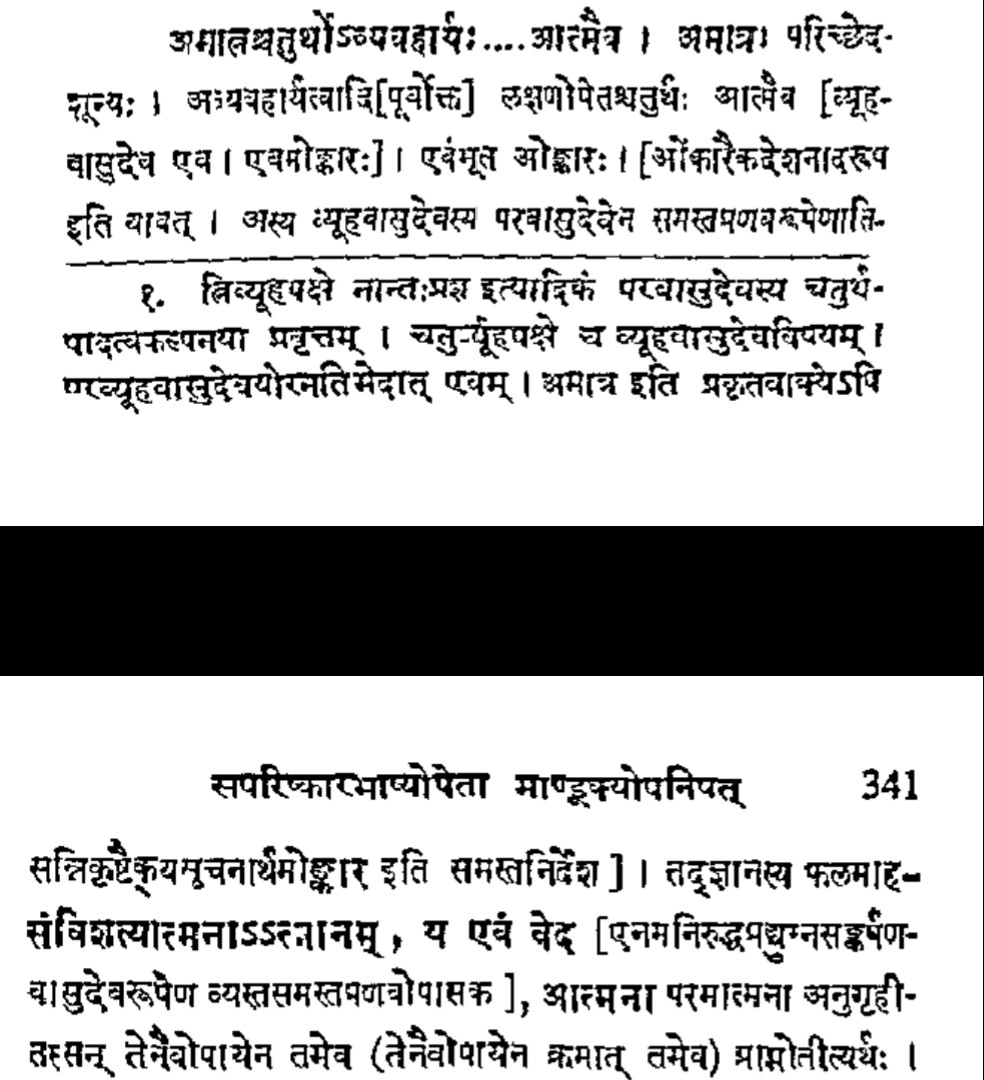 Here there's a line that says:-

Translation :- Hereby is advised that Paravasudeva's all Vyuha forms are perceived as one with (The Four Phases with four respective Vyuhas's) of Omkara. ~ Rangaramanuja muni's Mandukyopnishat Bhashya.

So my question is:-

So you have extensively given references from a specific interpretation of "vyuhas" according to Pāñcarātra theology in your question.

There is another similar quantitative statement in the Purusha Suktam verse 1:

He stood above (or beyond) by a gap of ten cubits

Obviously the sense of this is not to be taken literally. Sayana says:

Similarly, the quantitative description of "one quarter and three quarters" is metaphorical.

One quarter of him is all the creatures, three quarters of him are immortal in heaven

Of the Purusha, all creatures going through the three states of time, are one-quarter. Of him, the remaining 'three-quarters' are his nature, which is immortal and exists in "heaven" i.e. in his own self-luminous nature. Although it is impossible to attribute Brahman a division into 4 quarters due to the impossibility of quantifying Brahman as seen in the scriptural reference, "Brahman is existence, knowledge and infinite"; the intention of describing "quarters" is to emphasize the smallness of the universe in comparison to the nature of Brahman.

So, in conclusion, these are poetical metaphors. To attribute all kinds of later theories onto it would be to stretch the natural meaning and context.

Not the answer you're looking for? Browse other questions tagged sri-vaishnava upanishads atma pancharatra purusha .

6
Are there any references to the Brahma Samhita before Chaitanya Mahprabhu?
7
Why does Vishnu's thousand-armed Aniruddha form carry the equipment of a student?
8
Who is the seer of the Nila Sukta, the Vedic hymn to Vishnu's wife Nila Devi?
7
Why does the word "Atma" in the Brihadaranyaka Upanishad refer to the mind rather than the actual Atma?
6
What is the intention of the following Rigvedic verse to the Spirit
14
Where in the Mahabharata does Krishna discuss Archa forms of Vishnu?
8
What scriptures describe these four types of living beings?
6
Understanding Purusha aspect of Brahman and the difference between the two. Also why is the Male God personified as Purusha?