The Alwars (also spelled Azhwars) are a group of 12 ancient Vaishnava saints who lived in Tamil Nadu and are famous for their poetry in praise of Vishnu. The collection of their 4000 poems, known as the Naalayira Divya Prabhandam, is considered by many to be the "Dravida Veda", or South Indian Veda. The Alwars are crucially important figures in the history of Vaishnavism; it is the principles and beliefs embodied in the Alwars' poems that ultimately gave rise to the Sri Vaishnava sect (of which I'm a member).

In any case, one of the Alwars was a king called Kulashekhara Alwar, and here is a poem from his Perumal Tirumoli, taken from JSM Hooper's book "Hymns of the Alvars":

My question is, why does Kulasekhara Alwar address Vishnu as "Vitruvakodu's Lord" in every stanza of the poem? The only help the translator provides is that Vitruvakodu is "a place in the Chera country." (The Cheras were one of the empires that ruled South India, Kerala in particular, and it was the empire that Kulasekhara Alwar ruled.)

But why is Vishnu called the lord of Vitruvakodu? Is Vitruvakodu one of the Divya Desams, the 108 sacred places of Vishnu praised by the Alwars in their poetry? Did Vishnu or one of his incarnations (avataras) do something famous in Vitruvakodu?

I was right about Vitruvakodu being one of the 108 Divya Desams. The reason I couldn't find it initially is that it's more commonly spelled as Vitthuvakodu or Thiruvitthuvakodu. (Thiru means holy and it is commonly added to the names of Divya Desams). Vitthuvakodu is a village in Kerala, and according to this page it is the location of the fampus story Rama's ancestor Ambarisha a story and the sage Durvasa described in the Srimad Bhagavatam. Briefly, Ambarisha was engaging in an Ekadasi fast in honor of Vishnu here, and Durvasa came to him, asking for food. Then Durvasa went to take a bath, and Ambarisha had some water before Durvasa came back because it was important to break the fast at the right time. Durvasa was furious, and created a chakra (discuss weapon) to kill Ambarisha. But Ambarisha was a steadfast devotee of Vishnu, so the chakra was destroyed by Vishnu's Sudarshana chakra, which started chasing Durvasa. It only stopped chasing him when he fell at Ambarisha's feet and asked for forgiveness. In any case, after that incident Ambarisha attained Moksha at this location. 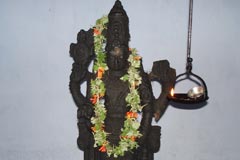 But the main deity of the temples, the one referred to as Abhaya Pradhan or Uyyavantha, is the idol installed by Arjuna (the photo isn't too clear, so I included a drawing as well): 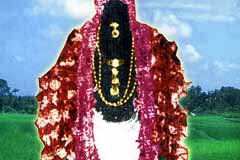 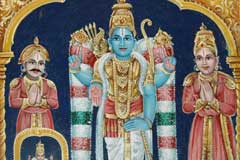 It's presumably the darshan of this idol that inspired Kulasekhara Alwar to compose a poem addressed to "Vitthuvakodu's lord".

Not the answer you're looking for? Browse other questions tagged vishnu temple sri-vaishnava alwar tamil .

9
What was the purpose of Vishnu's incarnation as Rama's ancestor Mandhata?
4
What was Muchukunda's next birth?
5
Which Alwars praised Vishnu in Sanskrit?

7
Who compiled the list of 108 Divya Desams of Vishnu?
13
How many of the Divya Desams are the sites of Sri Vaishnava Temples?
12
What is the secular account of the compilation of the Alwars' poems?
9
Which Alwars mention the gods whom they're incarnations of?
3
Why does Thirumazhisai Alwar say the Pandava Thoothar statue of Krishna is older than him?